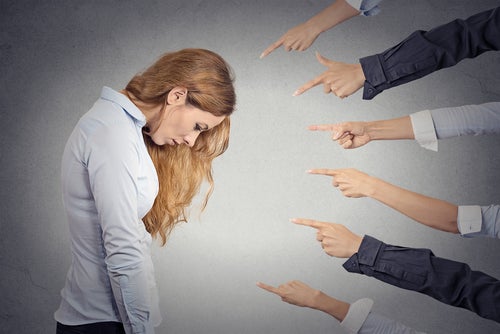 We all make mistakes, and it’s normal to feel bad about them. The problem emerges when we constantly feel guilty about things we’ve done in the past.

Guilt is a negative feeling that’s caused by something we did wrong or carelessly. Why is it so hard to accept and let go of guilt?

Many people blame themselves for things they shouldn’t. Others seem to seek blame. When there’s a certain attachment to feeling guilty, this suggests a bigger problem. It suggests that something is tormenting us, and we can’t seem to escape it.

We want to be hurt

As we previously mentioned, many people tend to seek blame. These people need to suffer. Why? Because they’ve probably been through tough times and circumstances in the past that were out of their control. And many times these situations brought up questions such as “Why me?” and “What did I do wrong?”

These situations produce insecurities, since they’re out of our control. But, what consequences does this create in our psyche?

It causes this insecure person to seek something they have control over. Usually, it’s something similar to what they experienced. For example, a person who has been abused would relate to someone who makes them feel inferior.

A person living with guilt punishes themselves. They may do it physically, but above all they do it mentally. They criticize themselves. They think excessively about where they went wrong and how they should have done it differently.

This self-criticism is the result of faults we have built up in our minds. For example, a person that has been abused might think that they should have been more accommodating, that they shouldn’t have said certain things, etc.

This is fantastic for manipulators and psychological abusers. What’s the problem? They carry blame that isn’t theirs. They become gray and sad. They don’t know how and can’t seem to open their eyes.

Maybe what they need is time or a decisive situation to make them realize what is happening. That they are not to blame, and they never have been. That they’ve been feeling down for no reason at all.

We hurt other people

A person with guilt doesn’t just seek to hurt themselves. Many times they seek to hurt other people, because this makes them feel superior and powerful. Sometimes, hurting themselves isn’t enough. The previous questions like “Why is this happening to me and not others?” can make them feel like “sharing” this evil that we’ve suffered.

Besides, having the power to hurt other people gives insecure people a sense of security. They feel better if others suffer as well. I’ve had a bad time? Well, let others have a bad time as well.

A person that has been harmed, and some point, will seek out revenge. It makes them feel almighty and powerful, though it’s a fictitious power. When they realize what they’ve done, they’ll feel bad. They’ll sink into guilt, though it was out of their control.

How to free yourself of guilt

A person living with guilt must be aware of it before they can solve the situation. The following steps and techniques can be helpful:

If you mess up, ask for forgiveness and keep moving forward. Making mistakes is human, and we shouldn’t block ourselves off without moving forward. Let us be truly sorry and try to not let it interrupt the course of our lives.

If something is making you feel bad, express it! Guilt feeds on the things we keep to ourselves. The things we don’t dare say out loud.

Our goal is to be happy, not unhappy. Why not do something that will help us avoid problems later? Or do we want to feel pain instead?

We have to change how we act and not be afraid of verbalizing what’s bothering us, what makes us feel bad, what we’re not okay with.

You may agree with me that love is one of the most wonderful things we can feel during our life.…

Everyone needs affection to maintain emotional well-being and be healthy. It isn't only good for them but for you too.…

Wellness
Whatever Needs to Happen Will Happen

Today I've decided that I'm going to give my heart a break and let things happen naturally, so that whatever…

Wellness
To Go Far, Be Passionate

Humans have become accustomed to living in a world of absolutist demands and absurd obligations. We create enormous pressure for ourselves and end our days full of tension and anxiety.…

Our lives are often filled with guilt and worry, two emotions that do not bring anything good to our lives, but on…

Wellness
Don't Believe Everything You Think

You get to work and say good morning. Everyone answers you except for one guy, who doesn't even turn to…