Living with Albinism: Beyond Physical Appearance 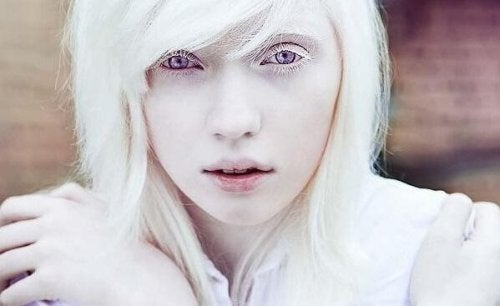 Living with albinism isn’t easy. This hereditary metabolic disorder is characterized by the absence of pigmentation (melanin) in the skin, hair, and eyes. However, there’s a striking aspect that accompanies this disorder: discrimination. For example, being an albino in Africa means having to live a terrifying reality. Due to superstition, these people’s situations are dramatic.

Every June 13th, people commemorate the International Albinism Awareness Day. In 2015, the United Nations General Assembly decided to establish this date with a very specific purpose: to encourage and defend the right of albinos to live in freedom and to be respected and defended against any act of discrimination and/or violence.

We may think that they decided to do this due to the number of mutilations and murders that take place each year in countries such as Tanzania, Burundi, or the Democratic Public of the Congo. Apart from these unimaginable and incomprehensible acts, people with albinism are rejected in almost any part of the world. People mock them, bully them, and discriminate them.

So much so that researchers have carried out plenty of studies on this subject in the last few years. Living with albinism and hypopigmentation means having to face serious social and emotional challenges.

Albinos: Beyond their lack of melanin

As of today, the medical community hasn’t yet agreed on whether to consider albinism a disability. The reason for this is that it’s a unique condition that represents a minor sector of our society. However, this genetic alteration limits them enough that they aren’t able to live normal lives. Their uniqueness, their physical problems, and the prejudices and discrimination they suffer often lead them to isolation.

They often suffer from eyesight problems, photophobia, and serious dermatological problems. Now, although there are several types of albinism (up to 18 genes are known to be involved, with 800 possible mutations), most of them have something very specific in common: rejection and the feeling of being in a “strange” environment. Their white hair, their pale and sensitive skin, their eyes… All of those traits tend to draw other people’s attention, especially if the albino is African or Asian.

We must point out that we all need to be and feel accepted from an early age. In the case of albinos, especially younger children, what they experience almost from the beginning is a heavy weight on their shoulders due to the fact that they look different from those around them.

Many times, despite having family affection and support, it’s common for albinos to develop low self-esteem, insecurities, and emotional withdrawal. In this context, living with albinism isn’t just fragile and disconcerting. It goes way beyond that and hides a much more delicate and wounded reality.

1 out of every 17,000 people suffer from albinism. The African continent, on the other hand, has one of the largest albinism populations in the world. In fact, in Nigeria or Tanzania, 1 in every thousand are born with it. All of this makes us realize something important: the quality of life of a person living with albinism will depend on two factors.

The first factor is related to the type of albinism they suffer from. For example, both the Hermansky-Pudlak syndrome (HPS) and the Chédiak-Higashi syndrome are two disorders associated with a symptomatology (burns, bruises, hemorrhages, constant infections, hepatomegaly, etc.) that can greatly affect the individual’s daily life.

The second factor is related to the place where the albino is born. Those who live with albinism in Africa have to deal with the fact that others consider them inhuman, perhaps even white demons. People carry out despicable and cruel acts against others who look different due to superstitions. This has even called the United Nations’ attention. Assassinations, kidnappings, mutilation, and rape are some of the things these people have had to suffer.

Now, things take a turn if we go to a very special corner of Panama. There’s a tribe in this country called Kuna in which 1 of every 150 people is born with this condition. In this precious place, albinos are a gift from heaven. They’re children of the moon and grandchildren of the sun. Others care for them, respect them, and worship them. Those living with albinism can feel very special here.

We must note that this is relatively new. Not that long ago, people considered them the unholy sons of the Spanish colonizers. They combined their rejection with violence. People’s perception of albinism started to change only about 2 centuries ago.

Finally, regarding Western societies, we must point out that there are multiple associations around the world that support those living with albinism. An example is ALBA, where activists support these people, hold conferences to inform people about this disease, and set meet-ups to promote integration so that albinos can finally feel like accepted members of our society.

“I now realize that I have a platform to inspire young girls, and as someone who never had a role model who looked like me when I was growing up, I now hope to be able to show that albinism can be beautiful and is just another kind of normal.”

It’s Okay to Be Different
It's not necessarily a bad thing for a child to feel different, since we're all unique and special in our own way. But no parent can tolerate their child Read more »
Link copied!
Interesting Articles
Culture
Stephen Hawking Quotes: 21 Reflections on Life

Culture
Love Isn't Bound By the Clock or the Calendar

In the past it was common to find marriages with a significant age difference between the two partners. Particularly with very…

Serotonin syndrome is a clinical condition associated with an adverse reaction to antidepressants. Recent studies indicate that the incidence of…

On many different occasions, people have compared the way computers process information with the way the human brain does. Both…