The Little Prince Who Forgot to Look at the Sky 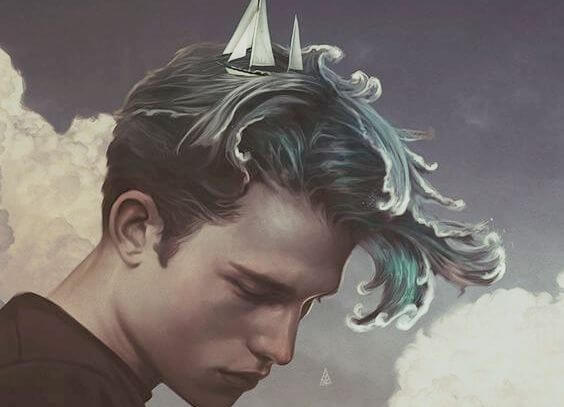 I don’t know why some people can just touch your soul without an exchange of even a single word or even glance. Even now I still don’t know why it’s only him who can make me feel that way. If it had never happened, I wouldn’t have ever really lived.

When I was about six years old, I was already used to seeing him walk up and down my street. He was blonde, and he reminded me of the little prince. Every afternoon I would look out from the balcony with my face between the bars and my legs hanging off the ledge like the surrounding plants falling towards the asphalt in a cascade of green while I snacked on sweets and picked my mother’s red carnations.

He reminded me of the little prince

“I know very well that boy was special, so special that he didn’t seem to fit in this world.”

Almost every day before dusk, he would stride across the street, eyes to the ground, arms full of books and the saddest look about him you could ever imagine. I always wished he would look up, if only just once, so he could see everything the world had to offer, if only he’d look up. But he never did.

I wanted to yell out to him that one glance could show him what the world has to offer if he’d just lift his eyes, but he never did.

What I knew of him I knew through comments about him that fluttered along whitewashed walls and in the doorways of houses at the crack of dawn, like sleeping white butterflies. At least, that’s how I imagined it. This is his story.

“His problem is that he reads too much.”

This is the diagnosis Juan Delgado gives. On his way from the homeopath to the psychologist, he passes an acupuncturist, a priest, a baker, a street vendor, a family, and — of course — a librarian. They all fit together and affect each other.

Juan Delgado returns to his house, exhausted from the same old thoughts always bouncing around in his head. After listening to that sentence over and over again, like an incessant echo, he has no choice but to stop and accept that books were indeed the root of his problem.

Like normal, before catching the bus to town he passes through the market. He goes to the book section to say farewell to them. Then, he passes the youth fashion section where he grabbed a few random items of clothing and slipped into the fitting rooms.

“Completely exposed, he saw his own image as he were seeing it for the very first time.”

The lights of the fitting room — extra bright to make everything look better — slowly brought a little life to his downtrodden figure. The bright light made his skin shine and gave his thick mat of tangled hair a certain beauty, covering his nonstop mind in a mask of beauty.

The pronounced curve of his eyebrows was like a crown over his heavy gaze. His face seemed smaller with his beardless cheeks mourning the loss of warm, human touch and any degree of color.

Tension used to radiate from his pubic area that had been covered in coarse black hair, but now resembled that of a younger man — unfamiliar with carnal pleasure, fragile.

He lifted his bony arms and knotted them behind his neck, searching in vain for some semblance of hair in their hidden depths. His skin — previously so soft and smooth — was now transparent. He was so fragile, he seemed on the verge of breaking, severely lacking any form of affectionate touch.

The image clouded, and reformed through the tears in his eyes. He lowered his gaze, and a hint a smile seemed to appear, his heart opened up and let loose in a silver rush.

Time passed. One day, I stopped eating my sweets on that balcony, but not before taking another look around the street. I hadn’t seen him in awhile, and I couldn’t help but think — despite what the world thought —  that books hadn’t done anything wrong. Instead, they were a refuge for that little prince who was all too alone.

A Butterfly that Thought It Was Still a Caterpillar: A Transformation Story
This transformation story tells the tale of a butterfly that believed it was still a caterpillar. It speaks of transformation and not accepting it. Read more »
Link copied!
Interesting Articles
Cinema, Television, and Psychology
Unpacking Disney's Version of Romantic Love