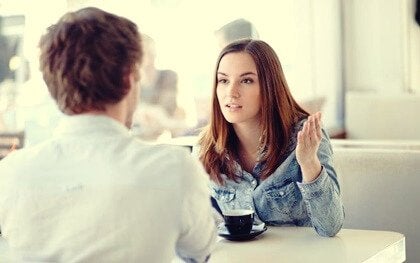 Listening without empathy is like looking without seeing. It’s like nodding your head although your mind is completely disconnected from what’s going on around you. It’s being there, but not really being there. Communication and empathetic listening are essential to building strong and meaningful relationships. They allow you to connect with other people’s feelings.

Just a few months ago, Paul Bloom, a psychologist and cognitive science specialist at Yale University, made some controversial comments about empathy. According to him, there’s nothing positive about it.

According to Paul Bloom, fakeness often hides behind empathy. For example, a person can empathize with what another is telling them even when they don’t really care about it. Basically, he refers to the fact that everyone, in some way, is able to put themselves in other people’s shoes. However, that doesn’t mean they actually care about what they’re going through. This is basically what listening without empathy is.

Therefore, he believes that there’s no point in having empathy if we don’t have a proactive attitude. In order to be truly empathetic, we must be authentically aware of the person in front of us and their story. Moreover, as Paul Bloom points out, sometimes there are people who simply seem empathetic but don’t do anything to help others. They only show empathy to feel good about themselves.

Thus, it isn’t enough to just be there, to feel and show that we understand the other person’s reality. We must actively manifest that feeling, that connection we’re creating with them.

People tend to ritualize their daily interactions so much that it becomes impossible for them to perceive the lack of emotional connection that exists within their relationships with others.

A very characteristic example is those dads and moms who respond almost automatically to their children when they explain something to them. It comes to a point where phrases like “Yes, your drawing is beautiful” and “Really? That’s interesting” become meaningless because they’re repeated so often. Some parents think their children don’t realize that they’re just trying to get a quick answer out so they can continue on with their activities, but they actually do notice it.

This doesn’t mean that we don’t love our children with all our heart. It means that our busy life interferes with our relationships. Parents who have a hectic schedule are always thinking about their responsibilities and tend to listen without empathy.

We’ve all talked to someone who wasn’t really there. There are times when we want to have a genuine conversation with a person but they only nod their head because they’re not actually listening. It’s as if there was no emotional connection and it’s just an empty conversation.

Other times, people give us answers that aren’t helpful at all. Here are some examples of these kinds of answers:

As you can see, these types of answers are clear examples of listening without empathy that can make us feel bad about ourselves.

We’re all able to become empathetic. In fact, Dr. Anthony David of the Institute of Psychiatry, Psychology & Neuroscience in London carried out a study which showed that it’s possible to measure empathy.

This has allowed the world to realize that everyone is capable of empathy. However, people also lack the willpower to improve their social abilities. This means that yes, we’re empathetic, but we don’t use empathy as effectively as we should.

Consequently, listening without empathy has become quite normal. We think of ourselves as comprehensive, patient, and caring when in reality we’re not empathetic with others.

In order to improve, it’s important to keep the following keys in mind:

How to use empathy effectively

To conclude, we shouldn’t assume that we’re experts in this field. We always have something to learn and improve on. Little by little, we can improve our empathy and this can lead to better, more genuine relationships.

The Art of Understanding Emotions: Empathy
We could define empathy as the ability to put yourself in another person’s shoes, to understand their vision of reality, their stance, and their opinions Read more »
Link copied!
Interesting Articles
Clinical Psychology
Klüver–Bucy Syndrome: The Loss of Fear

Psychology
Horses of God: a Novel about the Roots of Terrorism

In our eyes and in our hearts, we all see and feel the anguish suffered by the recent terrorist attack…