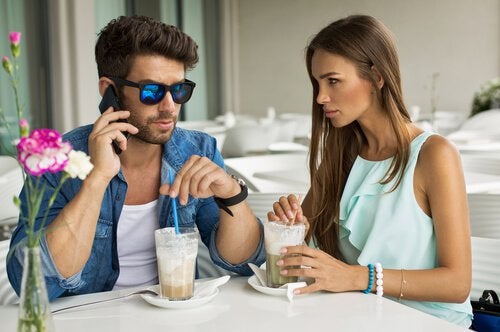 Why do we like bad boys? That is a question that many many women have asked themselves, especially when they are experiencing marital problems for having chosen someone who wasn’t in their best interest. And even though they knew that it was probably not going to be a smooth ride, the attraction was stronger than reason. The tendency to fall for bad boys holds true more often in adolescence. We only have to look at schools; the boys who are most successful and “get all of the girls” tend to be the leaders, the ones with traits of selfishness and narcissism.

Peter Jonason, from the University of New Mexico (USA), led a group of scientists in a study that analyzed 200 students. The results confirmed that the students who were most successful “with the ladies” were the most extroverted, unstable, narcissistic, and even a bit unpleasant. David Schmitt, from Bradley University, conducted a second study with 35,000 people from 57 different countries, with the same result. The men who were cataloged as the most attractive were the most “bad,” the ones with more defects in their personality.

The psychologist Gayle Brewer from the University of Lancashire also contributed his knowledge to this study. He affirmed that “bad boys” attracted ladies into unstable and passionate relationships. But this victory was usually short lived, because in the end, women without psychological problems usually end up choosing the good guys for stable long-lasting relationships.

This has a psychological explanation

From a psychological point of view, we can explain why we like bad boys. Women’s subconscious instincts seek protection. Thus, we tend to be attracted to strong men, with strong characters, who are selfish, adventurous, confident, with a knack for leadership, and who are even a bit unpleasant. “Bad boys” tend to have all the traits needed to make the female instinct see them as great protectors, as men who know how to protect themselves in life. The desire to be protected is something every woman has, even without them realizing it. Also the desire to “tame the beast” and to make them change is a tempting challenge for women.

Recently a girl asked me: “What’s wrong with me? Am I a masochist?” She always ends up being attracted to men who are not good for her. She lets herself get carried away by her instincts and doesn’t develop her sense of reason when it comes to romantic relationships. Although sometimes it’s not that simple. A lack of self-esteem can also make someone become attracted to someone who doesn’t treat them well, because they’re are convinced that’s the kind of treatment they “deserve.”

Our demands change with age

As the years pass by, women tend to have different demands. They become more demanding and value character in a mate and want the best for themselves. Many change because they have had a rough time in the past and have learned from their mistakes. Others change because they value themselves more and seek someone who won’t cause them problems. With age, reason becomes stronger than instinct. As always, we can’t generalize, because there are many types of women and every single one is unique. What do you think? Do you like bad boys?

Milton Erickson is considered the father of modern hypnosis, now called hypnotherapy. This American doctor and psychologist was the pioneer of many hypnotherapy techniques. In addition, he was also an…

Psychology
There's a Mental Health Problem in my Family... Now What?

Unfortunately, humankind has been afraid of mental illness throughout its entire history. In many cases, it was because we didn't…

Psychology
Sexuality in the Modern World

Sexuality is ones of the aspects of life which conditions and enriches it the most. Throughout history it has been suppressed, punished, liberated, criticized and even manipulated. Sexuality in the modern…