The Legend of Rainbow Bridge, the Resting Place for Our Pets 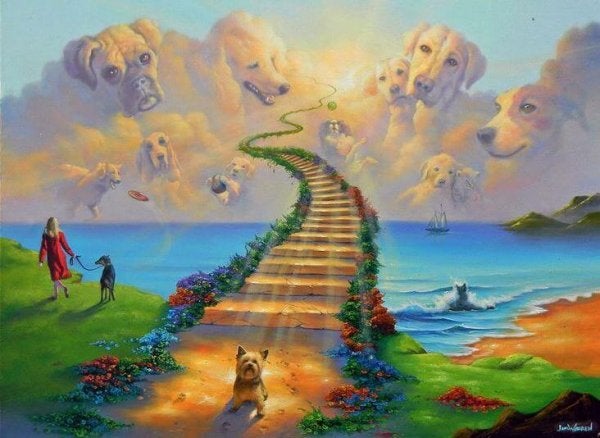 Legend has it that when our four-legged friends (and any other animal we have loved) say their last goodbye to us with a sigh, then they cross the Rainbow Bridge. On the other side of this bridge are meadows and hills where they can run, play and enjoy their freedom …

They say that there, on the other side of the Rainbow Bridge, there is enough space, food, water and sunshine for all of them to feel good. Furthermore, according to this legend, all the animals who were sick, maimed or cruelly injured, have their health restored and overflow with joy.

According to this beautiful legend, our friends are happy and satisfied except for the fact that they miss someone special who they left on the other side of the Rainbow Bridge. That is why, suddenly, while all of them are running and playing, one might suddenly stop and fix his gaze on the horizon.

The reunion of our souls according to legend

His body shudders and with great excitement he pulls away from his group and starts to run cross country really quickly. They see us in the middle of the bridge and they rush to greet us. Legend has it that then, humans and animals, intimate soul friends, are reunited, never to be separated again.

He can’t stop licking our face and our hands can’t stop stroking our four-legged angel, our beloved creature. Then, according to legend, we remain united for all eternity through a mutual loving and noble gaze.

This legend fills our heart with hope at the loss of our beloved animals. It helps us understand that, metaphorically, when an animal leaves this world, it remains in our heart even though we can not enjoy its physical warmth.

Even if they leave this world, they remain, partners, faithful and loving in our hearts

The Rainbow Bridge of abandoned animals

Thankfully this legend doesn’t forget those animals that could not, in life, enjoy the love of a person. The moving account of our legend, continues in this way …

“Suddenly on the Rainbow Bridge, the day dawned in a totally different way to the normal sunny days; this was a cold, gray day, the saddest day you could imagine. The newcomers did not know what to think, they had never ever seen a day like this after crossing the Rainbow Bridge. But the animals that had been waiting for their loved ones for a long time knew perfectly well what was going on, and they got together on the road that leads to the Bridge to watch.

They waited a while and a very large animal arrived, with his head down and dragging its tail. The animals that had been there for a long time knew immediately what the dog’s story was, because they had seen this happen many times before. The animal came closer and closer, very slowly, and it was obvious that it was suffering great emotional pain, despite the fact there was no physical evidence of pain.

Unlike the other animals waiting on the Bridge, this animal had not been restored to its youth and full health and joy again. As he walked towards the Bridge, he watched as all the other animals stared at him. He knew that this was not his place and that as soon as he could cross the Bridge, he would be happy. But this would not be so. When he approached the Bridge, an angel appeared and sadly apologized to him and told him that he could not cross. Only those animals that were accompanied by their loved ones could cross the Rainbow Bridge.

With no other place to go, the large animal turned around and among the meadows saw a group of other animals like him, some older, some very fragile. They were not playing, they were simply lying on the grass, looking at the road that led to the Bridge. Then he went to join them, looking at the road and there he stood, waiting.

One of the newcomers to the Bridge did not understand what he had seen and asked another to explain what was happening. “Do you see that poor animal and the others that are there with him? They are the animals that never had an owner. At least he had got into an animal refuge; he entered the refuge just as you see him now, an old animal, with gray hair and slightly blurry eyesight. But he never got out of the refuge, and died only having known the care of his attendant who accompanied him as he waited to leave the land. Since he did not have a family to give him love, he does not have anyone to accompany him to cross the Bridge. “

The first animal stood for a moment and asked: And now what’s going to happen? Before he could get an answer, the clouds began to break and a very strong wind made them disappear from sight. They could see a lone person, approaching the Bridge, and among the old animals a whole group of them was suddenly bathed in a golden light and suddenly they were young again, healthy animals, full of life. “Watch and you will understand,” said the second.

Another group of animals which were waiting there also approached the road and lowered their heads as the person approached. Passing in front of each head, the person touched each one, to some he gave a caress, and to others he would ruffle their ears affectionately. The animals that were rejuvenated were put in a row behind him and followed the person towards the Bridge. Then they crossed the bridge together.

“Who was that?” asked the first animal. And the second said: “That person was a great animal lover and worked to defend them. The animals you saw lowering their heads as a sign of respect were those who found new homes thanks to the efforts of such people. Of course, all those animals will cross the Bridge when their time arrives, whenever those who were their new families arrive here.

But the older animals you saw which were rejuvenated were those who never found a house … and since they had no family, they could not cross the Bridge. When a person who has worked on earth to help abandoned animals arrives here, they are allowed one last act of rescue and love. They are allowed to accompany all those poor animals for whom they could not find families on earth, so that they too can cross the Rainbow Bridge. “

Culture
There's No Investment as Worthwhile as Knowledge

We must take into account incentives in education. An education system that helps students face tasks and overcome their challenges is necessary for quality learning. Thus, to provide quality education, we must…

Culture
You Can Lose and Still Be a Winner