Some people procrastinate because they get an adrenaline rush out of living life on the edge. Others have simply made a habit of it. Read more about this here! 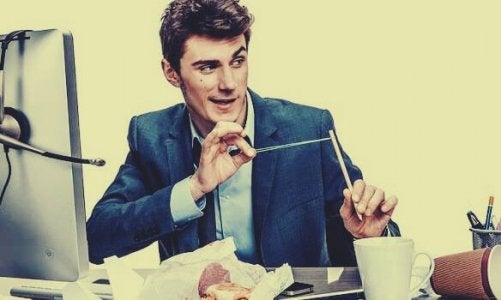 Leaving everything until the last minute is a way of life for many people. Those who procrastinate aren’t able to go about their business any differently, no matter how much they try to organize their time. They may get organized for a few days, but they soon return to the same old patterns. However, others enjoy the adrenaline rush they get from this.

Those who make a habit out of leaving everything until the last minute live on the edge. There are basically two types of people who do this. On the one hand, there are the procrastinators. They postpone important tasks compulsively and may not even finish them at all. Alternatively, you have people who are addicted to the adrenaline rush. They enjoy feeling that time is running out for them.

This behavior affects their lives. Sometimes, it can even have a serious impact on their lives. These people aren’t always able to control their situations on time and the consequences can be destructive. Also, their lives become chaotic. Leaving everything until the last minute contributes to mental confusion and makes it difficult to take advantage of their limited time.

“If there is a mountain to climb, don’t think waiting will make it smaller.”

Leaving everything until the last minute and the adrenaline rush

They say that a person is addicted to danger when they deliberately seek situations that would put their body or peace of mind at risk. When we talk about adrenaline junkies, we usually think of people who practice extreme sports or have dangerous jobs. Nevertheless, people who leave everything until the last minute are also adrenaline junkies.

Apparently, living life on the edge makes these people feel pleasure. Feeling the risk of oblivion is exciting for them. For some of them, this type of behavior is compulsive. In other words, they can’t stop acting like that time after time. These adrenaline junkies enjoy feeling like they can maintain control in extreme situations.

We should stress the fact that under those situations of extreme risk, the adrenaline rush they get is a significant factor. At the same time, this adrenaline production stimulates dopamine secretion. This second substance produces a feeling of pleasure. When dopamine is released in their system, they really enjoy it. As such, when these people deliberately put themselves in situations of risk, they feel satisfied.

Some people who acquire the habit of leaving everything until the last minute are addicted to adrenaline. They believe they function better when they’re working with deadlines. Also, they end up feeling a great sense of satisfaction when they overcome these risks.

Other people acquire the habit of leaving everything until the last minute. They simply have a deliberate tendency to postpone their tasks and responsibilities. These individuals feel they have more time than they need to fulfill their duties, but they decide that they’ll only do them when there’s no more time than they actually need. They also take on a risk in the sense that they might never finish their tasks. This is what tends to happen when they miscalculate the time required and end up unable to complete things on time.

These people aren’t necessarily lazy or negligent. They simply assume this behavior and they get used to it to such a degree that they basically can’t do things any other way. They feel anxious, stressed, and embarrassed when they postpone their duties. Nevertheless, they can’t avoid doing so. If they do manage to finally see things through, it leaves them too tired to do much else and they have to postpone the next one. Then, the cycle repeats itself.

Procrastinators calculate how much time they’ll need. They believe that they have precisely identified the point where the time they need and the time they have left meet. In fact, they often torment themselves by obsessing over the task to be completed. Most of the time, they don’t lose it from their sight. On the contrary, they keep it at the forefront of their minds. They often just want to wait until they “feel better” to fulfill their duties. Ultimately, the perfect moment never arrives. When the end of the allotted time is on the horizon, they finally get to work.

The consequences of this type of behavior

The consequences of this type of behavior are negative, no matter whether the person waits until the last minute due to the fact they love the adrenaline rush or whether they’re procrastinators. Sometimes, they aren’t able to meet their responsibilities and this can wreak havoc in their lives.

In the case of adrenaline rush junkies, their real issue is a type of repressed anxiety. Risky behavior is one way to cover up unresolved conflicts that provoke anxiety. Danger helps them forget their internal troubles.

Many procrastinators, on the other hand, are highly insecure people. They fear their efforts won’t be enough and that’s why they postpone doing things they should. This also gives them the perfect excuse for when things go badly. “It’s because I did it too quickly and under a lot of pressure,” they say.

In either case, this is problematic behavior. Not only do these people throw their own lives into disarray, but they usually end up losing other people’s trust. It also lowers their chances of getting the best results when engaging in a task. It’s unlikely they’ll be able to complete complex tasks that require continuous effort and consistency.

The 5 Types of Procrastination
It's rare to find someone who hasn't heard the one that goes, "don't put off until tomorrow what you can do today". Don't put off learning about the 5 types of procrastination either! Read more »
Link copied!
Interesting Articles
Psychology
When Solitude Defines Me

Genuine people prioritize healthy relationships. They are honest people, free of prejudice and independent when it comes to making their own…

Psychology
Low Self Worth - Do You Ever Feel Like You Aren't Worth It?

If you don't value yourself, perhaps it is because you don't know the negative affects of this act of injustice.…

Psychology
How to Handle Manipulative People

Without realizing it, we can become caught up in relationships with manipulative people who try to change our ways of…