Learn All about Polycystic Ovary Syndrome

Many women with polycystic ovary syndrome end up suffering from depression at some point of their lives due to the hormonal alterations that, along with the physical changes they experience, lead to mood disorders. 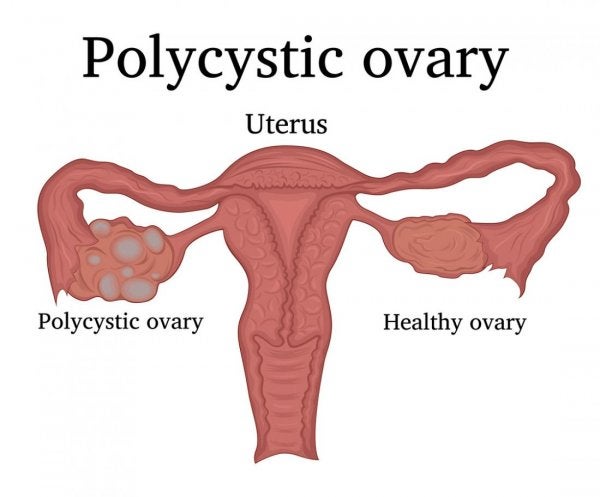 Living with polycystic ovary syndrome isn’t always easy. This condition is a reality for many women, even though we seldom hear of it. It manifests with pain, menstrual irregularities, infertility, and an increased risk of developing type 2 diabetes, heart disease, or depression.

It’s clear that every woman deals with this type of condition in her own specific way. However, because it was described in detail by doctors Stein and Leventhal in 1935, we know that polycystic ovary syndrome (PCOS) affects 1 out of every 10 women. We also know that many teenagers display these characteristics shortly after they begin to menstruate.

The good news is that there are better and better treatments with which to improve the quality of life of those afflicted by it. There are hormonal therapies, such as oral contraceptives added to various drugs to decrease insulin if necessary. Also, antiandrogens or dietary supplements that improve ovulation. Both of these strategies bring about good results.

It’s also important to remember the need for adequate medical supervision. In fact, many women don’t receive the diagnosis of polycystic ovary syndrome early on because they seldom go to the doctor.

Keep in mind that there’s always a disease that must receive treatment behind excessive menstrual pain, irregularities, and abnormal hair growth.

Polycystic ovary syndrome is an endocrine system disorder that affects women in their reproductive years. It’s characterized by an ovarian dysfunction, where the spent ovules aren’t always released. Instead, these thicken on the surface of the ovary, forming small benign cysts.

These cysts aren’t malignant and don’t usually require surgery. However, they do lead to new hormonal imbalances that manifest in the following symptoms:

Anovulation is one of the clinical manifestations noted by women with this medical condition. It means:

This condition responds to an alteration of the hormones where there’s an excessive level of androgens in the blood. It manifests as:

Acanthosis nigricans is a skin condition where areas such as the groins, armpits, or parts of the neck become darker and rougher. It’s a disorder that comes with its own hormonal alterations, and also with insulin resistance. In some cases, this fact can be evidenced as a side effect of some drug or contraceptive.

As we mentioned at the beginning of this article, polycystic ovary syndrome can lead to metabolic alterations. These, in the long term, lead to other relatively serious health problems. Here are some of them:

The medical approach to the polycystic ovary is multidisciplinary. Likewise, each woman will receive an individualized treatment that will start from the degree of hormonal alteration. To do this, you must follow some simple steps:

Any woman with this kind of metabolic syndrome undoubtedly needs a multidisciplinary approach. One in which different professionals can give her an appropriate treatment for each area that comprises this disorder. On average, the therapeutic approach integrates the following strategies:

Progesterone: Characteristics and Functions
Have you ever heard of progesterone? It's a female hormone involved in things like a woman's menstrual cycles and pregnancy. Read on to learn more about it! Read more »
Link copied!
Interesting Articles
Illnesses
Characteristics and Treatment of Neuropathic Pain