Learn All about Svetlana Alexievich

Nearly all of Svetlana Alexievich's books have gotten her into trouble with the authorities. She's a tireless journalist dedicated to recording the human drama behind important historical events. Read on to learn all about her! 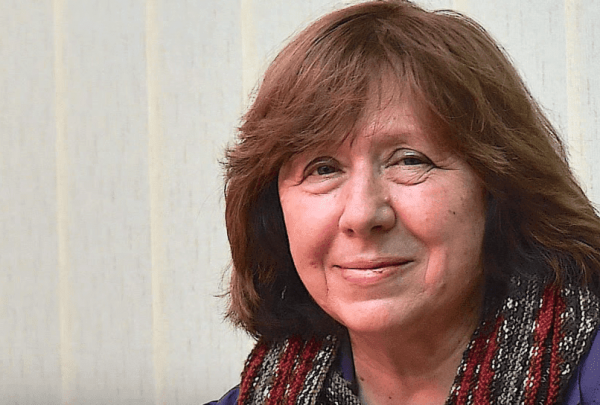 Most people had never heard of Svetlana Alexievich until 2015 when she won the Nobel Prize in Literature. It was the first time in history that a journalist won this award for investigative, non-fiction writing.

Until that point, only poets and fiction authors had won the prize. Svetlana Alexievich’s work, however, is inspired by real people and events. She captured the reality of the Soviet world and her own country, Belarus, better than anyone.

“But I don’t just record a dry history of events and facts, I’m writing a history of human feelings.”

Her most famous book, Voices from Chernobyl, has been translated into twenty languages. However, no one in Alexievich’s home country can read the book because the government banned it. That fact alone gives you an idea of how important this great contemporary writer is.

Svetlana Alexievich was born accidentally in a Ukrainian town called Stanislav. We say accidentally because her father, a member of the Belarusian military, was temporarily assigned there. Alexievich spent her childhood and a good part of her adult life in Stanislav.

Stanislav itself tells a story of instability. It was part of the Austro-Hungarian Empire, Western Ukraine, Poland, the Soviet Union, Germany, and finally Belarus. Stanislav doesn’t even exist anymore. Now, it’s a town called Ivano-Frankivsk.

Alexievich was born on May 31st, 1948. Her mother was a rural teacher, as well as her father (in addition to being in the military). Political instability marked her childhood and youth. Later, she studied journalism at the Belarusian State University.

A notable Soviet writer named Ales Adamovich is one of Alexievich’s greatest inspirations. He was one of the writers who developed a new genre he called “novel-evidence”, “collective novel”, “epic chorus”, or “novel-oratorio”. The genre is a hybrid between journalism and literature.

After working for a few newspapers, Alexievich started to work on deeper projects. She became a tireless traveler, crossing borders for testimonials from survivors of big historical events. That’s when she started to write excellent reports.

In 1985, she published her first book, The Unwomanly Face of War. It contained numerous interviews of women who lived through World War II. The newspaper she was working for when the book came out fired her and accused her of disgracing the national honor of the Soviets.

In 1989, Svetlana Alexievich published Zinky Boys after conducting 500 interviews. The people she interviewed had participated in the Soviet invasion of Afghanistan. In her book, she denounces many cases of human rights violations. As a consequence of her actions, the authorities forced her to appear in court.

Her outspoken criticism of the Soviet Union led her to seek politic refuge in 1991. Since then, she has lived in different European countries.

In 1997, Alexievich published Voices from Chernobyl, which is her masterpiece. In this book, she shares testimonies from the Chernobyl nuclear disaster victims. It took her about 10 years to collect all the material for the book. Her work brought to light the serious mistakes the authorities made during the disaster.

Svetlana Alexievich’s writing explores human drama and its consequences. Her work is moving because she’s able to communicate the profound paradoxes of great historical moments, particularly those related to the Soviet Union.

These events have directly affected Alexievich – she herself is a victim of war and turmoil. When she was a girl, her parents fled from the war. As an adult, the Chernobyl disaster left her mother blind and killed her sister. She also suffers from the grief of exile and the impossibility of returning to her home country.

Alexievich has received many prizes for her work over the course of her career. As we mentioned above, she’s the first (and so far the only) non-fiction writer to receive the Nobel Prize. Today, she continues to write and try to understand human evil and goodness.

Inca Garcilaso de la Vega: The Father of Peruvian Literature
Inca Garcilaso was born to an Incan mother and a Spanish father. His mestizo identity helped him write some of the most important texts in Latin America. Read more »
Link copied!
Interesting Articles
Authors
Harald Schultz-Hencke: A Dissident Psychoanalyst