Learn All about Postcoital Dysphoria

Have you ever had the post-sex blues? The solution to your postcoital dysphoria could be a well-known antidepressant. Read on to learn more! 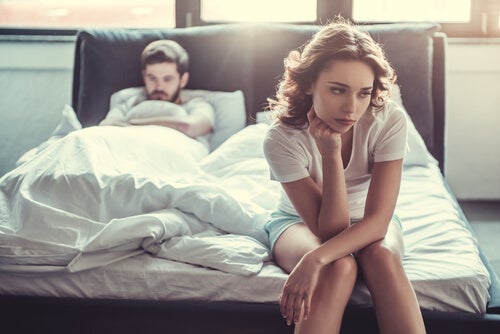 People who suffer from postcoital dysphoria (often called “post-sex blues”) feel incredibly sad after having sex. Their sadness might last for only a few minutes or up to several hours. You can think of it as post-sex depression.

Ana makes love with her husband about three times a week on average. At least two out of the three times, she feels sad after they have sex. She says it’s strange and doesn’t have an explanation for this feeling of deep sadness. It just happens.

It’s not that Ana doesn’t like having sex with her husband. She feels attracted to him and she enjoys it at the moment. However, immediately after, she’s overcome with sorrow and feels empty. The feeling lasts for about an hour or two, then slowly dissipates.

What happens to Ana has a name. Specialists call it post-sex blues, postcoital dysphoria (PCD), or postcoital tristesse (PCT). It shouldn’t be confused with depression. You don’t have to be suffering from depression to have PCD.

Many human sexuality experts believe that PCD happens when sex is physically satisfying but not emotionally fulfilling. However, scientists haven’t yet discovered a concrete cause of PCD. Maybe some people react this way to the biochemical accumulation that occurs after orgasm.

Dr. Richard A. Friedman has researched PCD and stated that he treated several patients with this syndrome in recent years. His first PCD patient was 25 years old. After having sex, this patient would feel deeply sad for an entire day. The patient was in excellent mental and physical health and didn’t have any other major life problems.

Dr. Friedman once stated, “I could have come up with a very simple explanation. I could have argued that this person was hiding internal conflicts about sex or that they felt ambivalent towards their partner. However, I couldn’t explain it. Although this individual’s anxiety was very real, I told them that I couldn’t find a problem that would require treatment”.

Various studies have shown that the activity in the amygdala drops markedly during orgasm. The amygdala is an area of the brain that helps process stimuli such as fear.

Professor Helen Fisher from Rutgers University recently conducted a study using MRI technology to look at the neural circuits that activate when people are in love. Her research showed that looking at a photo of a person’s romantic partner activates the dopaminergic pathways in their brain.

Thus, in addition to being pleasurable, sex could reduce fear and anxiety. The question that follows is: is this activity the cause of PCD? Could reaching such a high level lead to a free fall towards sadness?

Other researchers believe that PCD is related to how you assess someone’s worth after sex. In some cases, that process makes you feel empty. You wanted to have sex with that person, but it feels meaningless after.

Feeling obligated to have sex or doing it just to satisfy some emotional void in your life might also make sex feel meaningless. According to psychologist Raul Carvajal, “There’s a biological compensation, but emotional satisfaction is more limited. I think it has to do with the context in which we live in, of doing everything fast, just to check it off your list”.

Postcoital dysphoria can be cured with drugs

Thus, maybe PCD is a result of the increase in amygdala activity. Or maybe it’s something else. While Dr. Friedman doesn’t have a concrete answer to the question of why people have PCD, he does have a solution. He prescribes his patients a very small dose of Prozac, a well-known antidepressant.

His patients report that they enjoy sex a little less due to Prozac’s effect on libido, but that they no longer feel sad after sex. After all, sexual problems aren’t always a sign of dark, psychological problems.

The most important human sexual organ is the brain. Sex might be the most physical of activities, but sadness also has a physiological foundation. In any case, whatever the cause and whatever the solution of this syndrome, it’s clear that PCD exists and there are still plenty of questions about the condition.

The Sex Raft: An Odd Experiment
In this article, we're going to tell you about a 1970s experiment called "the sex raft." It involved a long journey on a small boat. Learn more here! Read more »
Link copied!
Interesting Articles
Sex
The Two Areas of Sexology

Sexology is a science that studies sex from different angles, taking into account behavior, identity, sexual orientation, and interaction. These are some of the aspects that a sexology professional has…

Did you know tantric sex originated from ancient Hinduism? In fact, tantra revolves around sexual practices focusing on creating an…

Sex
How Many People “Should” We Have Sex With?

The celebrated actress Sharon Stone once said that “women are capable of faking an orgasm, but men can fake an…