The Knight and the World: An Inspiring Story

This inspiring story is about a courageous knight who got tired of living in a fantasy world. Consequently, he decided to go to the real world to face new enemies. Little did he know he’d discover something that would forever change his outlook on life. 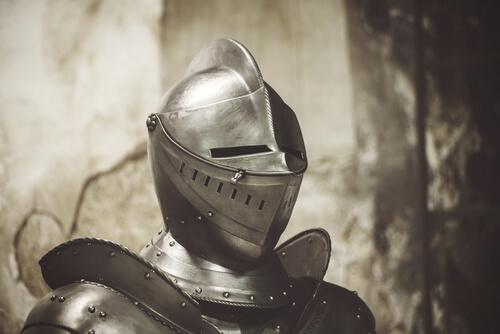 We decided to adapt this inspiring Pedro Pablo Sacristán story. It begins in a distant kingdom where a brave knight lived. He was so brave that he saved many fascinating characters who needed his help.

He had fought monsters, furious dragons, and evil ogres. The knight had defeated all of them and, for that reason, he was considered the most courageous knight of all time.

However, our brave knight suddenly got bored of fairy tales. He knew how to beat all those fantastic beings and felt that he needed to try something new. Consequently, he made the decision to leave the fairy tales and visit the real world. He wanted to find new and fascinating challenges that would keep that invading feeling of boredom at bay.

The knight goes to the real world

Thanks to the witches’ spells, which he knew by heart, the brave knight left his fantasy world and came to the real world. He was delighted with everything he saw. However, he understood from the beginning that there was a very powerful threat in this new world. People’s faces reflected it and he couldn’t wait to face it.

Those around him looked very distressed. They walked down the street looking very serious. They were in a hurry and it was evident that fear dominated them. In fact, they almost didn’t tolerate anyone approaching them and they looked very tense. The brave knight thought that this would be a great opportunity to face the enemies of the real world and to write a wonderful chapter in an inspiring story.

He searched every street and corner but saw nothing that inspired fear. Time passed and he still didn’t understand what all those dull-eyed and tense-looking people were afraid of. No matter how much he searched, the knight couldn’t find any dragons, witches, ogres, nor anything that could harm these people. He felt confused so he decided to return to his fantasy land.

“Laughter is the sun that drives winter from the human face.”

The wise man of the inspiring story

In the fairy tales, there lived an old wise man that many princes and daring knights turned to for help. Our hero found him meditating near a river in an enchanted forest. Without hesitation, he approached him to see if he could tell him what those people were so afraid of.

The old man seemed very interested in the brave knight’s question. However, after reflecting for a while, he told him that he didn’t know the answer. He told him to return the next day because he needed to study and meditate on the matter. The wise man then told him that they’d meet the next day at the same time so he could give him an answer.

The brave knight went to see the old man the next day. The old man told him that there were no evil monsters, no ogres, and no sorcerers in the real world. Therefore, humans had to invent enemies. The problem was that the enemies lived inside themselves. Those enemies were greed, envy, and lack of love. As brave as he was, the knight wouldn’t be able to defeat them because they were very dangerous.

The hero of our inspiring story wasn’t going to give up that easily, though. Therefore, despite the old wise man’s warnings, he decided to return to the real world and face those mysterious enemies that terrorized its inhabitants. He was ready to fight them.

The brave knight offered his noble services to everyone. However, the people only responded with indifference and distrust. It seemed like nobody wanted to put an end to those fears. They weren’t interested in changing, not even if it was for the better. Thus, they didn’t want any help.

Afflicted by the attitude of the inhabitants of the real world, the knight went for a walk in a forest. He was so distracted that he stumbled on a large stone in the road and fell. At that moment, he heard loud laughter. The knight saw that a child was laughing at him because he fell down. The knight felt angry and decided to attack him when, all of a sudden, he noticed the brightness in his eyes.

The boy was laughing really hard and didn’t seem afraid. That’s when our brave knight understood. The only way to end those fears was through laughter and innocence. That was the answer. From that moment on, the knight travels the world trying to make everyone laugh so that they can be innocent again.

“A day without laughter is a day wasted.”

The Inspiring Parable of the Unscented Flowers
Anger is a terrible thing. How can we possibly control it? Today we bring you an amazing parable which some valuable lessons about this destructive emotion. Read more »
Link copied!
Interesting Articles
Cinema, Television, and Psychology
7 Inspiring Quotes From Audrey Hepburn

Culture
Sometimes It's Smarter to Bet on Intuition

We all know what intuition is. If we reflect, we will discover how intuition has helped us in a great number…