Kinesthetic Communication: Why Is It So Important? 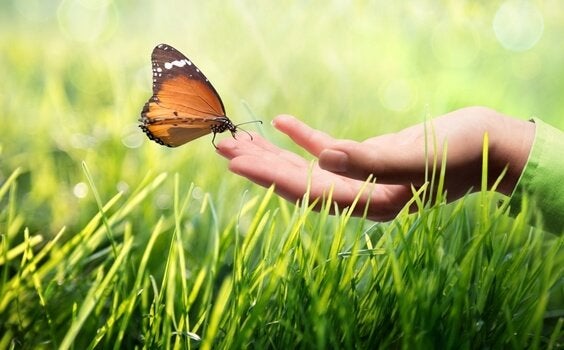 “And I found that, of all the senses, the eye was the most superficial, the ear the most haughty, smell the most voluptuous, taste the most superstitious and inconstant, touch the most profound and philosophical.”

The “words” of this language are gestures, posture, the eyes, and body movements. You can also include tone of voice and physical contact. Since much has already been said about nonverbal communication, this time we are going to focus on tactile contact with others.

Touch is one of the most important components of kinesthetic communication. Every human being has tactile behavior, even if they are not aware of it. It is, in fact, a form of communication that is going by the wayside.

New technologies connect us, but only via devices. In the opposite direction, physical contact with others is increasingly scarce. We communicate with others virtually and not so much with skin with skin.

The main forms of kinesthetic communication using touch are greetings, kisses, hugs, caresses, and blows. Some also include applause within this category but it actually belongs better to the auditory and visual arena.

The importance of tactile communication

Kinesthetic communication through touch is one of the most primitive ways of connecting with other human beings. Thus, it is also one of the most genuine and essential. The fist tactile contact we experience occurs with breastfeeding. Besides being a way to eat, the baby begins to form attachment. The same thing happens when am mother strokes her baby’s soft skin.

This type of tactile communication is so important that a large number of mammals do it, especially monkeys. They groom, embrace, and touch each other frequently.

Humans need this type of kinesthetic communication even more. A child who is not touched will have a harder time surviving his first few months of life, and will likely have emotional problems later. We need it our whole lives, though less so as we get older. But we really need it in certain times of our lives, like grief or illness.

The meaning of touch

When you give your hand to someone in greeting, tactile kinesthetic communication happens. The strength of your handshake and how you hold each other’s hands says something about the relationship. Sometimes it’s neutral. Other times, it’s more intimate.

Culture influences the way we touch each other. In some places, people maintain more emotional distance and therefore contact is reduced to a minimum. On the other hand, in other places hugs, pats on the back, and physical contact overall are very common. In any case, regardless of culture, everyone has their own way of using touch.

Kinesthetic communication can either strengthen or weaken a relationships. Couples who caress each other more will likely have a longer-lasting relationship. People who have more physical contact with their peers are happier and get sick less. While today’s society discourages touch, being aware of it is the first step in ensuring that physical touch lives on.

The Small Touches in Life Make All the Difference
Ever since I realized that the seemingly extraordinary things in life are not as valuable as the little touches from the special people around me Read more »
Link copied!
Interesting Articles
Psychology
Functional Diversity: a New Perspective on Disability

Throughout history, different models have tried to explain disabilities, but in this article, we're going to elaborate on the model…