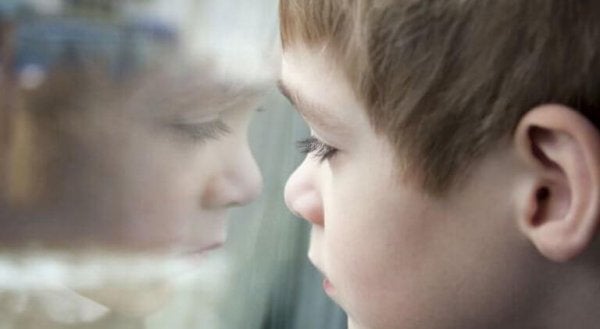 Attachment is the affective bond that develops primarily out of a search for safety and well-being. In some cases, the primary caregiver represents both a source of danger and protection for the child. This is how disorganized attachment develops.

For Bowlby (1969), saying that a child has attachment to someone means that they want to be near to and have contact with a tangible person. This happens in certain situations, especially when they’re scared, tired or sick. Going a step further, the truth is that we all need attachments. They are just always changing or adapting to new roles.

“A child’s previous history is what conditions the way they feel about the world and what the world expects from them.”

Why can children with disorganized attachment become abusers?

The type D attachment (disorganized) is connected to an unhealthy childhood environment. This includes different forms of child, physical or emotional abuse within the family. Victims of violence and physical abuse may have trouble relating to people, simply out of ignorance or lack of good examples.

It’s very probable that the anger that accompanies these children when they’re young will be incorporated in some way into their personality. This negative emotional charge makes it difficult for them to control their behavior and regulate their emotions. This increases the risk that they will also resort to violence.

Disproportionate punishments and abuse are very harmful messages to give the victims, who internalize them very deeply since they’re coming from a role model. It greatly impacts critical areas of their development. It harms their future social, emotional and cognitive development, as well as their childhood.

Here are the five most significant consequences of disorganized attachment.

A child with disorganized attachment may have a bad self-image. They may even believe that they are the cause of their parents’ lack of control. This will make them think of themselves as bad, incompetent or dangerous.

As a consequence, they start feeling that the world is basically an insecure and chaotic place. Rules and regulations exist but escape their understanding: they are not capable of acting correctly.

Abused children often have feelings of inferiority, which manifest as shy or fearful behaviors. At the same time, they may become hyperactive, trying to attract the attention of those around them in a desperate attempt to get reinforcements lacking at home.

Insecure attachment types, especially disorganized ones, are associated with higher rates of antisocial behavior and behavior problems. They often reproduce the relationship pattern they see at home with their peers and caregivers.

They feel confusion and apprehension about being around their parents. After all, they aren’t clear on how or when they will respond to their needs. In addition, they don’t trust any physical contact, especially from adults.

The main reason their behavior is disorganized is that they can’t find a solution to their problems. They can’t get away from or get close to their primary caregivers. In fact it is called “disorganized attachment” because a pattern for their affectional responses is not established: both outwardly and inwardly.

Sadness, indifference and anger are the most common emotions you would see on these children’s faces. A lack of motivation, a depressed mood and self-destructive behavior in the most serious cases may also converge.

Other symptoms, such as fear, anxiety and post-traumatic stress, are the natural consequence of living in a context that is important to them, but that they do not control.

On the other hand, these children seem to be less capable of coping with the stress associated with separation from their primary caregivers. The reason for this “disability” is related to their lack of consistent strategies that would enable them to regulate negative emotions.

4. Problems with attention and concentration

Thanks to numerous studies, we know that children with ADHD have a significant deficit in self-regulation skills (impulse control, ability to calm down, regulation of attachment, perseverance, inhibition, etc.).

Early relationships between the child and their primary caregivers determines the basis for acquiring these skills. Therefore, children with type D attachment are more vulnerable to problems acquiring them.

Sometimes, these children do not interact with their peers or their caregivers. Since they don’t have the necessary skills and reinforcements, they don’t know how to respond to others in certain situations.

In fact, if you observe, them, the have unfinished or disoriented movements without a clear direction or intention. They seem to be frozen. Or they tap their fingers and show a  desire to escape the situation, even in the presence of their caregivers.

Their behavior may oscillate greatly from passivity to nervousness. Specifically, when an adult approaches other children, especially if those children cry, they react dramatically. Being unable to predict their caregiver’s behavior, they look out for all available information. They’re hyper-vigilant.

“Blows aren’t the only thing that hurt”
-Pamela Palenciano-

The lasting effects of disorganized attachment

Lack of attention, physical abuse or sexual abuse often lead to disorganized attachment. Everything they went through in childhood results in insecure, shy and withdrawn adults. These people realize that they have learned ways of building and maintaining relationships that only bring them more pain. However, at the same time, they are incapable of changing.

So, by not finding the opportunity in childhood to symbolically represent other people’s mental states, their attachment pattern becomes chaotic. Even if they become aware of it, they are likely to always have this inability to incorporate their identity into their mental representations.

It’s wrong to think that when children are young they don’t understand what’s happening around them, or that they won’t remember certain moments when they grow up. The truth is that everything that happens in their upbringing has the potential to affect them in the future.

In this sense, even if we don’t feel like it, we have the duty to be affectionate and understanding. Parents must offer children security, protection and support if they want a secure attachment. Children are the future, let’s take care of them.

Psychology
Would Tolerating Infidelity Save the Relationship?

Even though the idea of "normal" in a relationship has undergone many changes, almost all societies continue to be very conservative…