Key in Lock Syndrome: The Overwhelming Urge to Urinate

Have you ever felt like you were about to burst because you had to urinate so badly? Did the feeling seem to get worse when you saw a bathroom? You might be suffering from key in lock syndrome. 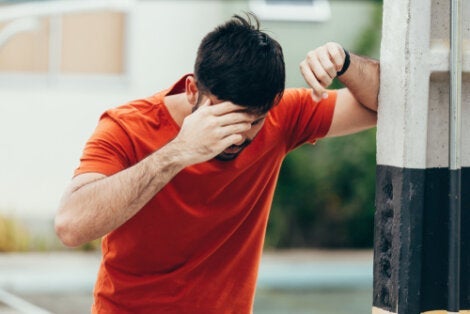 Today, we’re going to talk about key in lock syndrome, which you’ve undoubtedly experienced but probably weren’t aware of. Have you ever been in a meeting or focusing on something so hard that you didn’t realize you had to urinate? After the meeting, you get in your car, preoccupied with what was discussed at the meeting. You listen to music and ruminate on the meeting until you get to your building and you park. Your mind finally returns to the present moment when you get out of the car and pull out your keys. It’s not until that moment that you feel an intense urgency to pee and that your bladder is going to burst.

The 600 feet between your car and your house seem endless. You try to relax and walk a little faster, but sometimes that doesn’t work. You’re starting to feel desperate when you put the key into the door of the building. Of course, the elevator is on the 12th floor. You have to wait a few minutes more. The thing is that, when the elevator arrives and you get on, the urgency gets worse. You finally get to your apartment and turn the key in the lock on what is, at that moment, the gates to paradise.

You go directly to the toilet and your gaze is fixed on the only thing that matters at the moment: the throne that ensures the immediate pleasure of finally emptying your poor, tortured bladder. The best part? You didn’t pee your pants.

Why do you feel more urgency closer to the bathroom?

The same thing happens with gastrointestinal motility. Everything is fine until you suddenly realize you need to use the toilet and you don’t have one nearby. The longer you wait, the worst the feeling of urgency gets.

Your anxiety and tension immediately get worse, due to the fact that all of your attention is focused on that particular physical need. In that kind of situation, even the most obsessive clean freaks, who would never use a public restroom in a million years, would happily go into any bathroom, no matter how clean, dirty, disgusting, or unhygienic.

The desperation we described earlier and the example of the public restroom apply to both bodily functions. The question that we want to address, however, is why do you feel sudden urgency as you get close to your destination? What kind of mechanisms increases the urge to eliminate waste from the body? How do they activate? Let’s delve right in.

Your mind and body aren’t separate

There’s a profound connection between physiological need, organ function (intestines and bladder), the brain, where you focus your attention, your context, and the emotions (anxiety, tension, and despair) that make up the situations we describe above.

We’re fairly certain that if you make a list of things you do when you get home, going to the bathroom would win by a landslide. This might seem obvious, or silly to think about, but it does have a scientific explanation. To be more specific, this phenomenon has a neurophysiological, biochemical, emotional, and cognitive explanation.

It’s important to keep in mind that, in general, society considers the mind and the body to be separate and distinct. That’s because the mind-body dualism, or Cartesian dualism, is an idea that refuses to die.

Neuroscience and, more specifically, Psycho-Neuro-Endocrine Immunology (P.N.E.I) has proven that humans are made up of bodies and minds and our systems don’t function separately from one another. That’s why we have a scientific explanation for something as banal as needing to use the bathroom.

An explanation of the intense need to urinate

A series of biochemical changes occur when you get close to your destination. Firstly, your body recognizes and sends out an alert about your full bladder or bowels. The newly focused attention on that part of your body speeds up your need to go. The more you focus on it, the more your body activates that need.

On the other hand, being close to home, the place where you feel safe and calm also increases your need. This stressful situation, on top of the physiological mechanisms that kick in due to the fear of peeing on yourself, activates the release of adrenaline and cortisol. It also activates a tensing and stress of the abdominal musculature and a singular focus on one idea: the toilet.

This urgency to urinate is also called key in the lock syndrome, as we mentioned at the beginning of this article. This name also applies to bowel urgency. The phenomenon is a perfect example of the connection between the bladder, the gastrointestinal system, and the brain. Because while you can hold it for a long period of time, your bladder associates urination with getting home, and that activates an urgency that’s hard to control.

When I think about the jingle of keys when I’m trying to open the door, I can’t help but think about Pavlov’s bell. Conditioned reflexes are responsible for this phenomenon, just like in Pavlov’s experiment.

You’re probably familiar with Russian psychologist Ivan Pavlov, who conducted a now-famous experiment with a dog. When he fed the dog, he also rang a bell. After a time, he tried ringing the bell without offering any food. He observed that the dog salivated even when there was no food present.

The same thing happens when you need to urinate or have a bowel movement. Hector Galvan, the director of the Institute of Psychology in Madrid, says that we associate the bathroom with our physiological need and the awareness of our physical sensations activates our awareness, which tells us that we need to use the bathroom.

Environmental factors that contribute to key in lock syndrome

Ghei and Malone-Lee identified four environmental factors that also produce the urgency to urinate. Getting up in the morning, a key in the lock, an open faucet, and cold weather. They differentiate between urgency, a feeling that you can’t hold it in anymore, and actual incontinence when you pee your pants. They also state that being worried and tired can intensify the issue.

For example, the sound of water running sounds like someone urinating in the toilet. When you hear a sound that’s similar to what it sounds like when you pee, your brain produces an association and triggers an increase in the contraction of your bladder muscle (the detrusor).

On the other hand, three researchers from the National University of Colombia (Victor, O’Connell, and Blavias) conducted a pilot study to evaluate the environmental signals that could be stimuli with conditioned reflexes in these circumstances. The results partially coincided with the Ghei and Malone studies. In the first place was getting up in the morning, second (88%) was being on the way to the bathroom, in third place with 76% was having a full bladder, and in fourth place (71%) was opening the door to your house.

Don’t think about the toilet

You start to notice that you need to pee when you have 150 or 200 ml of liquid in your bladder. When your bladder is full, a sneeze, cough, or laugh can cause leakage. But not all is lost because it’s possible to control the urge.

All you have to do is calm down, reduce your anxiety, stop thinking about the toilet, and distract yourself. All of that will help you control your bladder. That being said, it’s important not to resist the urge to pee too often because that can damage your organs.

At the end of the day, it’s all in your head. Your brain is the commander, modeling, building, and deconstructing realities. Your mind, brain, emotions, cognitions, and all the systems in your body participate in this incredible synergy.

Enuresis: Causes, Symptoms, and Treatments
Eliminating body waste is a basic function that our body performs instinctively from birth. Enuresis is when we can't control these functions. Read more »
Link copied!
Interesting Articles
Cinema, Television, and Psychology
This Short Will Show You the Richness of Uniting Our Differences

Culture
The 30 Most Inaccurate Statements in History

It's strange that there are so many people in the world that are afraid of being wrong. It's strange because,…

I'm going to try to discuss this topic with the vocabulary and reasoning I now possess, knowing full well that…