Joseph Campbell: The Biography and Journey of a Hero

This incredible thinker, anthropologist and writer left an greatly valuable legacy in the field of comparative mythology. 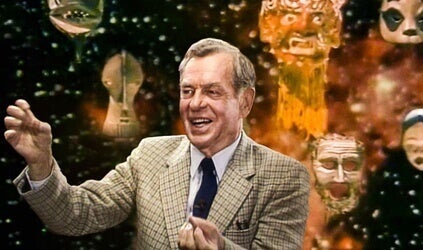 Joseph Campbell was an American thinker, writer, anthropologist, and professor. Most people know him for his studies on the universe of mythology. His work is considered greatly important in this field. However, it’s also appreciated in the field of psychiatry. His studies were contemporary of those from other great thinkers and influential figures of the 20th century, such as Jiddu Krishnamurti and James Joyce. For this reason, several philosophical and thought currents inspired him.

Moreover, Campbell devoted his life and work to comparative mythology. His most relevant work is The Hero With a Thousand Faces. Nonetheless, he wrote many works that, to this day, many still consider a staple reading for anthropologists and therapists. In fact, his work has inspired many professionals from diverse fields, from psychology to the world of cinema.

We invite you to continue reading as we’re going to delve deeper into the exciting journey of this great hero who continues to transcend generations.

“We must let go of the life we have planned, so as to accept the one that’s waiting for us.”

The life of Joseph Campbell

Joseph Campbell was born in New York in 1904. When he was a child, he visited the American Museum of Natural History with his father. That visit sparked his interest in everything related to Native Americans. A few years later, he became an expert in this area, especially in this culture’s mythology.

Additionally, he studied English Literature at Columbia University and got his Bachelor’s degree in 1925. At the same university, he also got a Master’s degree in Medieval Literature in 1927. During his time at this university, he made two important trips to Mexico and Guatemala. Later, he traveled to Europe and met philosopher and writer Jiddu Krishnamurti. Following this meeting, he decided to go to India, where he became interested in Eastern philosophies, especially Buddhism.

In Europe, he continued studying. In fact, he became immersed in the world of the Arthurian cycle, a set of literary texts whose origins are historical events and Celtic folklore. On the other hand, he studied Indo-European philology at the Ludwig Maximilian University of Munich and received a scholarship to study Old French, Provencal, and Sanskrit. In addition to this, during the years he was abroad, he learned French, German, and Japanese.

The work of Joseph Campbell

His first book, The Hero With a Thousand Faces, was published in 1949. In this piece of work, he talks about something he called “the hero’s journey”. In it, he also introduced the concept of “the hero’s monomyth” to the world. He explained that each hero’s life consisted of undertaking a journey, which forced him to face a series of psychological tests that he had to overcome in order to evolve as a human being. Additionally, he mentioned that every hero must share his acquired wisdom with the rest of the world when they returned home.

Now, there’s something quite curious and surprising about Campbell’s research. Basically, he found that the latter myth we talked about is repeated in all cultures and mythologies of the world, regardless of their religion or geographical influence. In fact, he came to demonstrate that there was a way to carry out the necessary transformations in human beings and that, on top of that, it was universal.

Campbell worked with Swami Nikhilananda on the translation of the Upanishads, a set of Hindu holy books, and their subsequent editing. Also, he was interested in the work of  Swiss psychiatrist Carl Jung, which he followed closely.

Among his best-known pieces of work, you can find The Masks of God, The Mythic Image, and The Hero With a Thousand Faces. Campbell’s literary legacy regarding mythology, spirituality, and religion is broad. In 1985, the filming of the documentary Joseph Campbell and The Power of Myth began, which was directed by George Lucas. Lucas was a scholar and follower of Joseph Campbell’s work. In fact, through Campbell’s work, the popular Star Wars saga came to be.

Campbell was deeply influenced by works such as the Upanishads and authors such as Otto Rank, James Frazer, Abraham Maslow, and Stanislav Grof. Moreover, the Jungian method of dream interpretation inspired him greatly. In fact, it’s closely related to the myth theory that he later developed.

In his works, you can notice frequent references to writers such as James Joyce and Thomas Mann. He was also interested in the works of Pablo Picasso, Nietzsche, and Arthur Schopenhauer.

Joseph Campbell passed away on October 30th, 1987, in Honolulu, Hawaii. He left behind an immense and valuable legacy in the field of comparative mythology. He was able to combine great knowledge about history, literature, anthropology, and religion, which are still of special interest in today’s academic world. Campbell was a hero worth remembering.

“The cave you fear to enter holds the treasure you seek.”