Joaquin Phoenix's Speech: For Sentient Beings and the Environment

He advocated for equality, human rights, environmental justice, and veganism; he also remembered his brother... Joaquin Phoenix's words after winning the Oscar moved millions of people. Today, we'll talk about why they were so powerful. 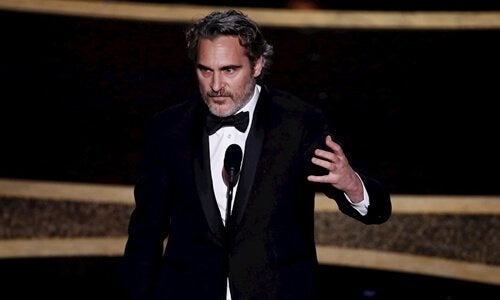 He held the Oscar in his hand, but it seemed like an afterthought. His voice was firm and sure, unlike his expressions and gestures, which swung between those of a shy man and those of someone completely overcome by emotion. Joaquin Phoenix’s speech barely lasted three minutes. That was enough, however, for it to reach people around the world, making the headlines and touching the hearts of millions.

We don’t know if the effect of his message will last as long as most viral news. In other words, a snippet that’s shared by practically everyone, and then quickly forgotten. Interestingly, he had already touched on some of the same ideas during the Golden Globes. With honesty and candor, he made an emphatic but personal invitation to create change. He calls for changes based on environmental protection and veganism to create a more sustainable and just world.

While his acceptance speeches for previous awards touched on these issues, they weren’t the main act. However, at the 2020 Oscars, his beliefs were clear. His speech was very different from the rest of the winners. It wasn’t political. Instead, his words were infused with the magic of emotion, the power of humility, and the sensitivity of someone who wants to raise awareness.

“We’re talking about the fight against the belief that one nation, one people, one race, one gender, or one species has the right to dominate, control, and use and exploit another with impunity. I think that we’ve become very disconnected from the natural world and many of us, what we’re guilty of, is an egocentric worldview, the belief that we’re the center of the universe. We go into the natural world and we plunder it for its resources.”

The Oscar acceptance speech that everyone should listen to

When movie stars support a cause, it’s always nice to hear, and it always makes the news. In recent years, the movement for women’s rights and gender equality has a presence in almost every kind of ceremony. You can tell that we’re moving forward, and the changes are as positive as they are hopeful.

In addition to that, in this context of social activism, it’s impossible not to be reminded of Marlon Brando and the day that he snubbed the Academy by rejecting his Oscar.

In his place, he sent Sacheen Littlefeather to speak out against the unjust treatment of Native Americans. It was a historical moment, not only because the event is so high profile, but because of the journalists that went to find out about what Marlon Brando was condemning.

There’s no way of knowing if Joaquin Phoenix’s speech will have the same impact. We don’t know if, after listening to his message, someone will change the way they eat or take action to save the environment.

Either way, it’s clear that his message will be on the hearts and minds of many people for at least a few days. Let’s take a closer look at what he said.

Joaquin Phoenix’s speech started as a simple expression of gratitude. He said he didn’t feel like he was superior to any of the artists who were there with him in the theater. At the end of the day, everyone shares the same passion and that passion is what keeps him going.

His role as the Joker might be the climax of a brilliant career. However, his embodiment of Batman’s classic enemy has put him on another plane altogether. His portrayal was genius. Never before had a comic book character seemed so human.

For Phoenix, his success is, more than anything else, an opportunity to give voice to the voiceless.

“No nation or people has the right to exploit others,” said Phoenix. But we do it anyway. Some obvious examples are gender discrimination, racism, attacks on the LGBTQ community, exploitation of animals, and the environment.

We’re an eco-centric society that turns a blind eye to injustice. Not only do we refuse to see it, or neglect it, but we subconsciously reinforce it almost daily.

“I think that we’ve become very disconnected from the natural world… We go into the natural world and we plunder it for its resources.” One of the most well-known aspects of Joaquin Phoenix’s personality is his staunch defense of the environment and veganism. His late brother, River Phoenix, shared this conviction and lifestyle. He was known for his animal rights activism and for his work with PETA.

Joaquin Phoenix’s speech appeals to people’s love for animals. He wants you to connect with their suffering, and remind you of that which defines human beings: love and creativity. If we can create new, more sustainable systems that respect animals and the environment, everyone wins.

Joaquin Phoenix’s speech and the memory of his brother

As you probably know, River Phoenix was Joaquin’s older brother. He was a brilliant actor who was recognized and praised by the world of film. Sadly, he died from an overdose on October 31st, 1993 at the age of 23. In his Oscar speech, it was practically inevitable that Joaquin would mention his older brother.

He did, in just a sentence. Words that coincided with his message, with his powerful speech. He said: “Run to the rescue with love and peace will follow”.

He leaves us with the idea, the essence, of that love that acts as a powerful engine for human beings. It’s capable of creating change and achieving a more sustainable world where all of its inhabitants are respected.

River Phoenix: A Truly Rebellious James Dean
In this article, we're going to tell you a bit about the life of River Phoenix, one of the most promising actors of our time. Read more »
Link copied!
Interesting Articles
Cinema, Television, and Psychology
Scarlett O'Hara - An Unstoppable Woman

Cinema, Television, and Psychology
This Short Will Show You the Richness of Uniting Our Differences