Possessiveness and control shouldn't ever be part of loving another person. However, jealousy often triggers passive-aggressive behaviors in couples, which can lead to hyper vigilance, mistrust, and even blackmail. 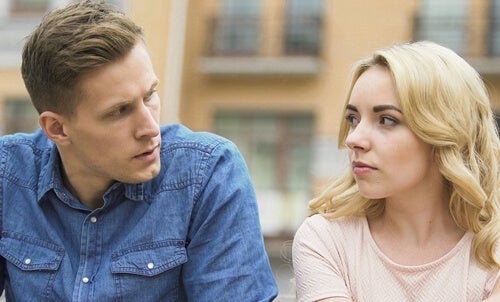 Jealousy and passive-aggressiveness often go hand in hand. From a psychological perspective, these emotions are complex and potentially lethal for a relationship. Other factors such as fear of abandonment, humiliation, and, of course, anger also come into play in these situations. Jealousy, as you know, affects people of all ages, cultures, and genders, and can lead to dangerous and destructive situations.

Something that always stands out in Shakespeare’s plays is the author’s ability to portray the whole kaleidoscope of human emotions. One of his most famous plays to this day is Othello, which is an in-depth exploration of jealousy. In this classic tale, we have one of the most unique and also Machiavellian villains of all time: Iago.

Othello’s skilled and malicious servant hatches a plot to drive Othello mad by making him believe that his wife, Desdemona, was unfaithful. Iago symbolizes the obsessive and dangerous inner voice that fuels the fire of compulsive jealousy.

He perfectly represents the obsessive and mistrustful mind. He echoes and amplifies Othello’s jealousy, which ultimately leads to his death.

Iago must have been one of Shakespeare’s most important characters, considering he gave the villain nearly 1100 lines in the play. That’s nearly as much as Hamlet or Richard III, for example.

As Michel de Montaigne said, experiencing jealousy is a sickness of the spirit and our worst enemy.

Jealousy and passive-aggressiveness often go together for a very concrete reason. Jealous people don’t directly and openly express their jealousy. In other words, people don’t usually go to their significant others and say that they feel offended when they talk to other people or that they’re angry and humiliated when their partners smile at and spend time with other people.

Instead, jealous partners usually engage in passive-aggressive behaviors. Instead of expressing themselves clearly, they berate, manipulate, threaten, and humiliate their significant others. Indirect punishment and the silent treatment are very common.

Aggressive behavior like this starts off passive but, in certain situations, it can lead to more active and harmful behaviors.

Iago and Othello are a perfect representation of an interesting aspect of jealousy, which is that it manifests itself like an alter ego. It’s as if there were an external voice that convinces you of something and then kidnaps you. The things that you do under the influence of jealousy are the things that the “normal” you would never do.

This jealous, external voice feeds your fear of abandonment and betrayal. It makes you mistrustful and often causes you to see dangers where there aren’t any. Through a lens of jealousy, crazy ideas suddenly seem reasonable.

A study from Dr. David DeSteno at the University of California demonstrates that this voice symbolizes the “threatened self”. That’s the part of you that feels violated and can trigger passive-aggressive behavior.

Are jealousy and passive-aggressiveness part of your genetic makeup?

Some theories talk about a genetic foundation for this kind of behavior. Jealousy and passive-aggressiveness make up a kind of dark logic that some psychologists and anthropologists believe is in our genes. This approach argues that human beings are the result of evolution based on survival and mating.

Social competition, along with the fear of being betrayed and ending up alone, triggers a whole series of emotions and thoughts. The mind becomes hyper-vigilant and obsessive. Anger takes over. From there, you see behavioral aggressiveness and the evident risk involved.

Is it possible to manage your jealousy?

In conclusion, the key to dealing with jealousy lies in understanding a clear fact: absolute and enduring fidelity doesn’t exist. To love someone means to trust them. It’s not about possession. Healthy love sets aside anger, control, and hyper-vigilance.

However, sometimes, an individual’s jealous behavior is actually pathological, and their distress is related to psychological delusions. In the case of pathological jealousy, psychological therapy is key. Thus, the answer to the question about managing jealousy is that every person is unique, so their solution/treatment will be different.

Therapists might focus on reducing controlling behavior (such as looking at your partner’s phone) or de-activating obsessive thinking. Boosting an individual’s self-esteem and reducing anxiety and the fear of abandonment can also be important. The one thing that every patient has in common, however, is that they have to be willing to change. They have to be aware that their jealousy is preventing them from having a healthy relationship. Although this point may seem obvious, it’s important to keep in mind.

Othello Syndrome – Uncontrollable and Pathological Jealousy
Jealousy is pretty normal in romantic relationships. The problem is when it becomes uncontrollable, constant, and unhealthy. This is known as Othello syndrome. Read more »
Link copied!
Interesting Articles
Romantic Relationships
How to Strengthen Your Relationship during Confinement

Marriage is the union of two people of any gender. Certain legal rights or formalities, matrimonial regimes, help establish it. This celebration implies the creation of a series of rights…

With new technology available to everyone, there are ways to make life easier, but it comes with new problems as…