If you become what you fear, what's there to be afraid of? 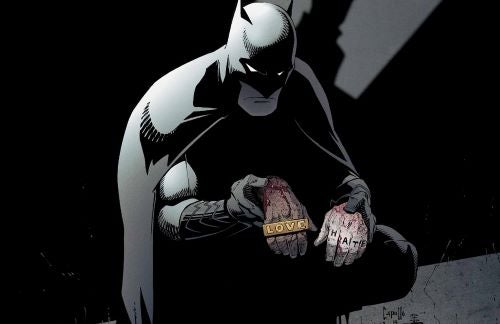 Batman is a complex hero with a dark past. He’s a shadow who vowed to fight darkness although he was fighting his own demons.

Besides his trademark Batsuit, Batman’s universe revolves around darkness. This darkness consumes both himself and Gotham City. A New York-esque city, Gotham City is a dark and gloomy place where chaos reigns and crime is rampant. This is clearly the opposite of Metropolis, Superman’s city, which is colorful and safe. Both heroes are the epitome of their respective cities.

Batman dates all the way back to 1939, when Bob Kane and Bill Finger founded Detective Comics. In this article, we’ll try to see what makes Batman a complex hero.

The origins of Batman

Every hero has a turning point. Usually, a tragic past that changes their life forever, defines them, and leads them on the path of justice. His parents’ death is Batman’s defining moment.

Bruce Wayne, Batman’s alter ego, grew up in Gotham City with his well-off parents. However, their happiness didn’t last long.

While leaving a theater, Bruce’s parents were killed by an assailant right in front of the then 8-year-old boy. Thus, Bruce inherits his parents’ fortune and is raised by Alfred Pennyworth, his family’s butler, who’s his father figure and mentor.

Bruce decides to fight evil and bring justice to his city. He does it without supernatural powers but with technological weapons, his incredible intellect, and knowledge of martial arts.

What’s with the bat?

This symbol might seem obvious if we think about Gotham City’s darkness. Bats are nocturnal, they’re considered evil, and people fear them. However, Batman chose this creature as a way of overcoming his own fears.

Fight darkness with darkness. Stay hidden and anonymous. If you become what you fear, what’s there to be afraid of?

Batman and the hero complex

Heroes are people who possess the right traits to fight evil and help others. According to philosophers like Plato, a hero walks amongst gods and men.

The concept of “hero” has changed throughout history. In ancient times, heroes were mythological. Most heroes were immortal. In Greek tragedies, heroes were superior to men and, in the Middle Ages, war heroes were the main story leads.

In graphic novels, heroes have superhuman abilities, just like in classical literature. Across all universal literature, heroes embark in journeys where they win battles, overcome hardships, and become famous.

Batman’s case is an atypical one. He’s an entirely human hero and, still, we enjoy watching him thrive, grow, and become famous, just like any other superhero.

Behind every superhero, there’s a great villain trying to foil his plans. Villains are similar to heroes but have an entirely different leitmotif. Batman’s peculiarity is that he creates his own villains.

Just as Bruce Wayne decides to fight evil, there are characters who disagree with this and turn into his enemies. In several of his comics, we meet some of these villains, including Catwoman and Poison Ivy. The Joker is his most well-known villain. He has a deep connection with Batman that is best explained in Batman: The Killing Joke, a great graphic novel that’s well worth the read.

Batman’s a complex but easily recognizable hero. He’s a character who’s wrapped in an obscure and hypnotic aura that keeps fascinating us.

“Life, misfortunes, isolation, abandonment, poverty, are battlefields that have their heroes; obscure heroes, sometimes greater than the illustrious heroes.”

Embrace Your Dark Side, Face Your Monsters
This is the time to embrace your dark side. Forget about the noise. Let that negative voice in your head fade away, little by little.  Read more »
Link copied!
Interesting Articles
Culture
The Polygraph: Is it Effective?

The polygraph, commonly known as the "lie detector" is an instrument that has its origins in the 20th century. Its…

These Jane Goodall quotes have a wonderful purpose: to restore human beings' respect towards nature. One of her goals has always…

Culture
The 8 Ways to End Suffering According to Buddhism

Culture
Platonic Love: Are We Using the Wrong Expression?

Have you ever heard of the expression 'platonic love'? Usually, people use this expression to refer to a person they…