It's Okay to Be Different 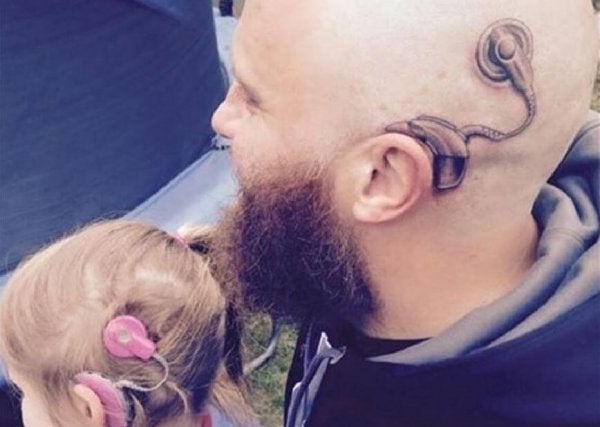 It’s not necessarily bad for a child to feel different, since we’re all unique and special in our own way. But no parent can tolerate their child feeling less than everyone else.

That’s why the parents of Charlotte Campbell didn’t hesitate to give their daughter a cochlear implant when they realized that she couldn’t hear anything from her left ear, and also had problems with the transmission of information between her right ear and her brain.

This makes her different to the naked eye, and they didn’t want that to be a problem for her. Because he didn’t want little four-year-old Charlotte to feel so bad, her father shaved his head completely and got a tattoo of a cochlear implant, just like the one his little girl had.

As you can see in the photograph, cochlear implants aren’t simply hearing aids that make sound louder. They can’t be taken off and put back on, which makes them much more visible and obvious. This is so because the implants do the work of the parts of the brain that aren’t functioning properly. They provide the brain with the sounds that it should be interpreting.

An act of love reflected in a daughter’s smile

Alistair Campbell, Charlotte’s father, told the NZ Herald that he did it because of the love he felt for his daughter, and that, even though he’s letting his hair grow back, he won’t hesitate to shave it off again any time his daughter wants or needs to see the tattoo.

Charlotte’s mother, for her part, is used to living with this kind of technological support, because she also has an eight-year-old son named Lewis who must wear a hearing aid to improve his hearing.

The most important part of this kind of intervention and support is improving the quality of life of the child, and preventing their condition from limiting them in society.

Tamara, a short film about a deaf girl who wants to be a dancer

“Tamara” is a beautiful animated short film that tells the story of a girl who can’t hear, but who wants to be a dancer. In spite of her circumstances, she is able to feel music and express it through dance.

This short teaches us that every child and adult should explore their dreams and believe that they’re possible. Nobody is more or less capable of dreaming and feeling good about themselves than anyone else.

Whatever your condition is, you should strive to feel different, but not less than, everyone else. This is how you can overcome any difficulty that may arise from living in a world that doesn’t allow for differences.

It’s all about drawing out your best qualities and using them to create opportunities. It’s also about using your unconditional love to help the people you care about.

Every father, mother, friend, sibling, and every other person in the world can make it so that their peculiarities don’t act as a handicap. Through letting your individuality stand out, you can promote behaviors that show that we live in a diverse world.

As you can see from the story we shared today, you can do wonderful things for other people, because even little actions can completely change somebody’s world.

Frida Kahlo is one of my favorite people. She was an intense, brave and magnificent woman who left an incredible legacy,…

Culture
Marsha Linehan: from patient to psychologist and overcoming BPD

The Streisand effect is when someone tries to censor or prohibit information but ends up achieving the total opposite effect. This effect got its name when, in 2003, a website…