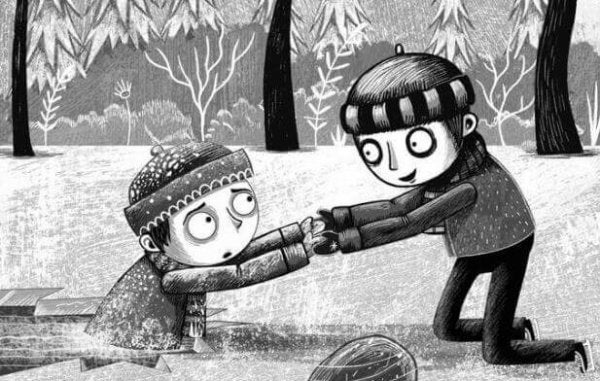 The Boy Who Could is a story that we should be telling to every child in the world. We say that because it has a really powerful lesson: you have to fight to achieve your personal goals and objectives, and stop listening to any voices that try to kill your inspiration.

The self-published Spanish writer Eloy Moreno adapted this folk tale we think should be told to every child in the world. The Boy Who Could is an empowering story. It shows the reality of how we make our dreams and build them up in our lives.

It also moves away from the annoyingly optimistic idea of “you can do anything you put your mind to.” The honest truth is that wanting to do something and being able to aren’t always the same. That’s something we need to understand starting in childhood so we don’t fall into the trap of too much self-demand.

Being able to look at your potential in a realistic way is how you build up healthy self-esteem. That’s why it’s so important to put the “can” before the “want,” and let the dreamy, magical desire to overcome push you forward.

The story: The Boy Who Could

Two boys spent all morning skating on a frozen lake. But then all of a sudden the ice broke and one of them fell into the water. The current pulled him a few feet away, where he was under a sheet of ice. The only way to save him was to break that layer of ice.

His friend started to shout for help. When he saw that no one was coming, he quickly looked for a rock and started to hit the ice as hard as he could.

He hit it over and over and over again until he opened up a hole, then put his arm through, grabbed his friend, and pulled him out. A few minutes later, the firefighters came after the neighbors heard the boy’s shouts and called them. When he told the firefighters what happened, they kept on wondering how such a small boy could have broken through such a thick layer of ice.

“There’s no way he could have done it with those hands. It’s impossible, he’s just not strong enough. How did he do it?” they said to each other.

An old man nearby came up to the firefighters when he heard them talking.

“How?” they replied in shock.

“Nobody was there to tell him that he couldn’t.”

Children, dreams, and our role in helping them build up their self-esteem

There are two big pillars we lean on to develop and let our ability to overcome things run wild. In other words, when we’re little, what other people tell us isn’t just an obstacle or an inspiration. It’s also what shapes our identity and our self-image.

As adults, we play a huge, essential role when it comes to building up children’s self-esteem. They’re like sponges that absorb everything around them, including any messages we give them about life. All children are made of a fragile, innocent, delicate, dreamy, and amazing material. They have sparkling minds that make their games into dreams to create and wishes to fulfill.

Whenever you’re around children, you have to remember this: we’re like their trainers. We’re responsible for their fantasies, their desire to live life, their self-esteem, and especially their identity.

As we all know, stories are one of the best ways to get messages through to children. You can use them to help children understand themselves, move through the world, learn values, and have new experiences. This story has a message about how important it is to develop an absolutely necessary life skill: resilience.

When we say resilience we mean toughness, persistence in the face of hardship, and being in touch with yourself. Stop and think for a second about how important it could be for a child to hear this story and learn how to make a solid foundation for their internal castle.

Messages like the one in this story will help them create their own special, well-thought out wings. These kinds of messages also help them experiment with their abilities and their interests. But most importantly, they help children develop their own strategies for self-management.

12 Ways to Promote a Child’s Self-Esteem
We're so obsessed with adult well-being that we have forgotten the importance of fostering self-esteem in our children. Read more »
Link copied!
Interesting Articles
Culture
Does Music Make Children Smarter?

Many times you may think life is only unfair to you, and your attempts to change unfair situations don't seem to have positive results. Today…