Most people remember Isaac Newton either as one of the greatest scientists of all time or as a tormented man. This is because he had a sad childhood and never quite fit into society. 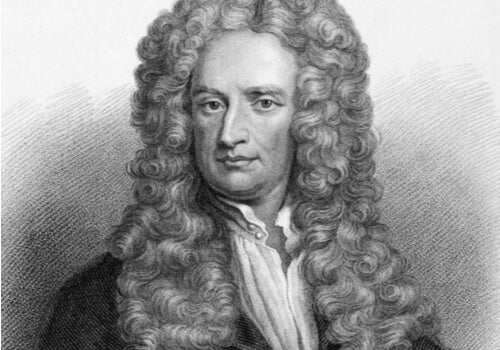 The most interesting part about Isaac Newton is that he was quite contradictory. Although we mainly remember him as the father of modern physics, in reality, he spent a lot more time on mystical matters. We perceive him as a model of rationality and yet his life was quite irrational.

Beyond the extraordinary scientist who formulated the law of universal gravitation, there was a man who fantasized, imagined, and agonized over what he felt and sensed. Although many classify him as the greatest scientist of all time, he dedicated a los of his existence to alchemy, to the secret messages of the Bible… to madness.

“Truth is ever to be found in simplicity, and not in the multiplicity and confusion of things.”

Isaac Newton is perhaps the greatest proof that reason and unreasonableness can coexist in the same human being, that they aren’t mutually exclusive. It’s also a model of high intelligence applied to hard work, based on rigorous observation and method, all of which is simply brilliant.

Isaac Newton and an unhappy childhood


Isaac Newton came into the world amid adverse circumstances. His father died three months before he was born. He was born premature, so small and weak that no one believed he would survive. Against all odds, he did survive.

His mother remarried a man named Barnabas Smith, who didn’t want to take care of other people’s children. Thus, he sent Isaac to live with his own parents, whom Newton knew as grandparents. Their relationship with the boy was rather toxic. Later, Newton made a list of his sins, which included the desire to burn his grandparents alive.

When he was 10 years old, his stepfather died. Thus, he returned to live with his mother and two new brothers. At the age of 12, his mother sent him to a boarding school. In those years, he learned Latin and mathematics and he also studied the Bible. He was a weak and lonely child who didn’t stand out much in class. Thus, the teachers relegated him to the back row.

A restless and hostile young man

Isaac Newton stuttered most of his life. He was also a sickly person who didn’t relate much to his peers. When he did, it was to make bad jokes or to attack them in one way or another. He decided to become more studious after a fight with a classmate that he somehow publicly beat and humiliated.

He spent a lot of time locked up in his room. There, he began to build mechanical objects, models, and various devices. In addition, he studied hard and was curious about everything. A very young Isaac met Catherine Storer, the only woman who he possibly had an affair with. He made dollhouses for her and offered them as gifts. The relationship didn’t transcend and, in fact, historians think that Isaac Newton died a virgin.

At the age of 18, Isaac Newton enrolled at the University of Cambridge. He basically learned on his own but found several teachers who taught him some things. He soon got in touch with the Royal Academy of Sciences, which declared interest in his findings and devices. It was also then that the first scientific debates arose, which Newton always maintained throughout his life.

Isaac Newton had two nervous breakdowns. The first one occured in 1693 and the second approximately in 1703. During those episodes, he didn’t eat or sleep. He was deeply depressed and paranoid. He isolated himself and distrusted everyone.

In the meantime, he formulated the law of universal gravitation, as well as the laws of mechanics. As much as his contemporaries disliked him, he soon became a household name due to his brilliance. He held various academic positions and was even a member of the English Parliament, a position in which he basically did nothing.

Newton dedicated the last 30 years of his life to religious studies and the occult. He believed he was divinely chosen to decipher secret messages from the Bible. Then, he pointed out that the world would end in 2060. Similarly, he declared that the Catholic Church was the beast of the Apocalypse and that Moses was an alchemist.

During his last years, he was morally distraught by a bitter debate with Leibniz and other physicists. In addition, he had kidney stones and died as a consequence of that condition. His memory is often honored in many ways.

Michael Faraday: An Amazing Physicist
The most remarkable thing about Michael Faraday was how determined he was about his scientific research. He became one of the wisest men of his time. Read more »
Link copied!
Interesting Articles
Biographies
Louis Pasteur: His Life and Legacy