Polarized thinking is automatic and makes us generalize situations without stopping to examine them first. People who think this way usually say things like “I never do anything right" or "I always end up losing". 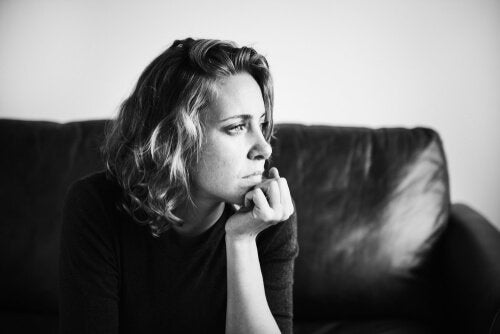 Polarized thinking is a cognitive distortion. In other words, it’s a reasoning mistake we make without realizing it. It makes us process information incorrectly and this leads to emotional distress.

Cognitive distortions were described by Albert Ellis and Aaron Beck. In general, they’re misconceptions that lead to dysfunctional emotional states. This includes irrational fears, feeling sad for no reason, etc. Polarized thinking is one of many forms of cognitive distortion.

Polarized thinking is an extreme simplification of reality. Things are either black or white, good or bad. We don’t see the nuances that exist between one extreme and another. People with this type of distortion feel comfortable placing reality between two extremes. Why does it happen? How do we beat it? Let’s take a look.

The characteristics of polarized thinking

The main characteristic of polarized thought is the tendency to generalize and encompass different realities under one category. Therefore, people who think like this often use absolute words such as “always”, “never”, “everything”, and “nothing”. They do this automatically and put every isolated incident that comes their way into one of those boxes.

These extreme categories are generally very negative. They’re used to reiterate the existence of something bad. People who think this way usually say things like “I do everything wrong” or “Everyone takes advantage of me”.

For those who have polarized thoughts, it’s as if nuances didn’t exist. They build a great deal of their identity around those classifications and look for a way to fit everything around them. Although reality proves that they’re mistaken, they resist abandoning their radicalization.

What causes this cognitive distortion?

In general, polarized thinking is a characteristic of those who adopt a victim role in life. No one does this because they want to. It’s an emotional block caused by bad experiences. At the root of it all, they believe they’ve experienced bad things that they didn’t deserve.

The victim takes on the role of a passive object of circumstances or “destiny”. They don’t believe that they have any control over the negative things they’ve experienced nor how they’ve handled them. Instead, they believe that they’ve been a passive depository for pain and can’t do anything about it.

People who consider themselves victims haven’t discovered tools nor acquired resources they can use to overcome many of their challenges. Instead, they project their resentment and develop polarized thinking.

This type of thinking stems from prior unresolved challenges. Overcoming it means taking on a new perspective on our past and present. Believing that you’re the victim allows you to relieve yourself of responsibility. To escape, you have to accept that you’re responsible for what happens to you and, above all, for how you respond.

A good way to start is to pay attention to our automatic responses and to ring a mental alarm when we say categorical words like “never”, “always”, “everything”, or “nothing”. Afterward, we should stop and think about just how unreasonable our statement is.

Furthermore, it’s important to think about the situations in which we feel like victims. Maybe it’s a romantic relationship in which we’re unhappy or a job we feel is too demanding.

Is putting up with it our only option? Or are there other ways out that we’re afraid to take? Perhaps polarized thinking is an indicator that we’re not taking ourselves seriously enough. Maybe we need some time and space to think about what we’re dealing with.