Isaac Asimov, The Power of Psychohistory

Asimov is one of the great science fiction forerunners. His Foundation series develops around a key concept: the power of psychohistory. Could this science be about tangible reality? 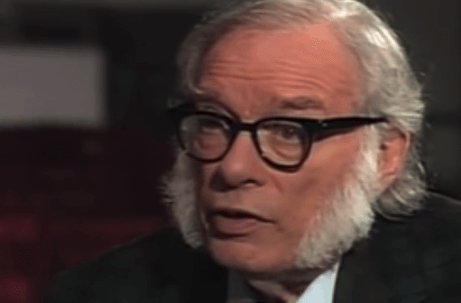 Isaac Asimov is one of the fathers of contemporary science fiction. He’s responsible for the power of psychohistory. He’s the author, writer, and editor of over 500 books.

Asimov was born in Russia but grew up in the United States and has always been a faithful advocate of applied science. In addition, he firmly believed in the power of science fiction as a precursor to real science.

I, Robot and Foundation are two of his best-known works. The first one is about the Three Laws of Robotics, the ethical code that governs a fantasy world.

However, Foundation might just be Asimov’s most popular work. In it, Isaac studies the concept of psychohistory, a scientific discipline he invented. Psychohistory is the combination of mass psychology with high-level mathematics that allows predicting the behavior of a society.

Today’s article will try to bring you closer to Asimov’s work and his contributions to literature and science. How did psychohistory go from being a fictional discipline to becoming a possible branch of social psychology?

The life of Isaac Asimov

Isaac Asimov was born in Russia in 1920 but moved to Brooklyn, New York, with his parents at a young age. He learned to read on his own by the age of five.

Shortly after learning to read and write in English, Isaac also learned Yiddish, the language of the Ashkenazi Jews. He graduated from high school when he was 15 years old and enrolled in Columbia University. He graduated from college before he turned 19.

Like many young people at the time, Asimov joined the Army when he graduated. His career as a science fiction writer began to develop at this point, in 1939.

He worked at the Naval Air Experimental Station in Philadelphia during World War II. There, he came into contact with other people who, like him, became renowned science fiction writers such as Robert Heinlein and L. Sprague de Camp.

After the war, in 1948, Isaac returned to Columbia University to become a Doctor of Biochemistry. When he graduated, he joined the Boston University faculty.

Over the course of a decade, Asimov published several columns in various science fiction and fantasy magazines. These led to the development of the stories of his two aforementioned best-known series. The stories he wrote in his columns were somewhat related and, thus, he compiled them to form the books the world knows today.

Foundation – the power of psychohistory

Inspired by the fall of the Roman Empire, the Foundation series takes place in the last days of the Galactic Empire. Asimov presents a reality that’s chillingly plausible, even though it takes place in a distant future.

In this future, the fall of the Empire implied an Era of Darkness that lasts 30,000 years. This is a clear allusion to the Middle Ages. Hari Seldon, the inventor of psychohistory, determined this period could be reduced to only 1,000 years if the brightest minds of the Empire gathered on a single planet. The chosen planet is Terminus and the wise men are in charge of storing the knowledge acquired in the latest years.

Asimov’s narrative is active and immersive, although his literary ability isn’t what interests people the most at this time. The science of psychohistory is perhaps one of the greatest predictions in science fiction.

It’s basically the harmonious union between mass psychology, anthropology, and high-level mathematics. A skilled psychohistorian could predict the pattern of behavior of an entire society in the distant future.

Fortunately for humanity, science has brought to reality many of the inventions described in science fiction literature. A good example of it is the work of Jules Verne. Although psychohistory seemed to be an attractive concept, it wasn’t too feasible in the real world.

However, the new century brought a host of technological advances with it. The use of the Internet and all the platforms hosted on it translated into an enormous production of data. What would happen if psychohistory used this data to become more than just an illusion of science fiction?

The power of psychohistory and reality

This kind of data can come from many, many sources and measure almost any online phenomenon. The amount of time a user spends on a website, the most attractive content, the most popular colors, the life span of a product, or the dynamics of a trend, among many others. In short, the data flow is infinite.

Today, this data flow is known as big data or, in other words, a set of data of great variety. It’s stored at a rather high speed and arrives in larger quantities every time. Big data constitutes all those that humanity generates in electronic form and that traditional databases can’t yet process.

Various social scientists, mathematicians, and engineers are working hard to find a good way to process all the data. Many of them recognize it’s a lot of work but well worth the effort.

Books allow people to look back at a particular moment in history, to the present, and to even consider the possible futures that could derive from it. The Internet, on the other hand, gives a broader vision of the present, but the analysis of data would allow humans to look at the future in a more objective way.

Final notes about the power of psychohistory

Asimov’s power of psychohistory is clear on one point: not everyone can exercise it and discover future behavior patterns. As with psychohistorians, finding the true value within all the useless data can be nearly impossible.

The process of discovery and psycho-historical calculation requires a group of professionals, according to Asimov. These professionals must specialize in data analysis, theories and social history, business experience, executives, and scientists. Only a large group will be able to ask the right questions, predict behaviors, and recognize precise patterns.

Finally, Isaac Asimov was a pioneer, one of those figures in history who’s broaden people’s vision of the world, projecting it into the future. He paved the way to something more tangible and real with practical applications through his fictional works.

5 Fantastic Quotes from Isaac Asimov
Many of these brilliant quotes from science fiction writer Isaac Asimov extol the value of science and denounce the effects of ignorance. Read more »
Link copied!
Interesting Articles
Biographies
Valentine's Day: Who Was the Real St. Valentine?