Internet Gaming Disorder: What's it All About? 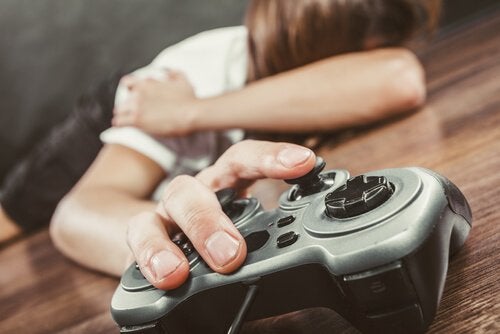 Lately, people have been demanding treatment for teenagers with Internet use problems. This is because it’s not uncommon to see young people suffering from disorders such as Internet gaming disorder.

Young people use the Internet to access a wide variety of content through multiple devices. Their main goals when surfing the web are making new friends, having fun, or learning.

However, in the last few years, different research has shown that inappropriate or excessive Internet use can have negative consequences. These consequences affect the daily life of the person or their family, other interpersonal relationships, or their emotional stability.

Internet gaming disorder: Is it real?

The Diagnostic and Statistical Manual of Mental Disorders (DSM-5) states that Internet addiction alone can’t be classified as a mental disorder. However, it proposes the existence of Internet gaming disorder. (American Psychiatric Association, 2013)

This has given place to different studies. Thanks to them, there’s enough evidence to affirm that an excessive use of video games can have worse of equal negative consequences than those of any other known addiction.

Here are the diagnostic criteria required to be able to diagnose someone with Internet gaming disorder, according to the DSM-5.

Repetitive use of Internet-based games, often with other players, that leads to clinically significant functioning issues. Five (or more) of the following criteria must be met within 12 months:

Internet gaming disorder is characterized by excessive and prolonged use of Internet-based games. It results in a group of cognitive and behavioral symptoms such as a progressive loss of control over games, tolerance, and withdrawal symptoms. These are similar to the symptoms of a substance use disorder.

As in substance-related disorders, people with Internet gaming disorder continue to sit in front of a computer playing online games even though they’re aware that they’re neglecting other important activities.

They usually spend about 8 to 10 hours per day and at least 30 hours per week performing this activity. If they’re restricted from using a computer or playing Internet games, they get agitated and angry. The severity of their addiction can lead them to spend long periods of time without eating or sleeping.

Another symptom of those suffering from Internet gaming disorder is that they disregard normal obligations such as schoolwork or family commitments. The essential characteristic of this disorder is a persistent and recurring participation in Internet games, typically group games, for many consecutive hours.

These games involve competition between groups or different players (who are, more often than not, in different parts of the world) who participate in complex and structured activities that involve social interaction.

Team spirit seems to be a key motivator in this disorder. People with this disorder automatically resist other people’s attempts to redirect them towards their school tasks or personal activities. That way, the individual rejects personal, familial, or vocational occupations.

On the other hand, respondents often say they use the computer to “avoid boredom” rather than to communicate or search for information. In some of the people who were studied, researchers found brain activation that was triggered by exposure to Internet games in specific regions that aren’t limited to the reward system.

A study conducted in China gave place to the description of the criteria related to this condition. The optimal criteria and threshold for diagnosis should still be determined empirically. Therefore, we recommend taking the information given in this article lightly.

If you think you have Internet gaming disorder, the best thing you can do is seek professional help. Don’t hesitate to go see a psychologist. They’ll be able to help you overcome this addiction and reduce its impact on your life.

3 Ways the Internet Decreases Our Critical Capacity
Several studies have indicated that being constantly plugged into the Internet diminishes our critical capacity. But how, and what are the effects? Read on! Read more »
Link copied!
Interesting Articles
Psychology
Of All the Things We Carry, Our Attitude is the Most Important

Many people struggle with a sense of a lack of meaning in their lives. Day to day life acquires meaning…

We're all capable of becoming torturers, the prestigious researcher and psychologist Phillip Zimbardo once said. All you need are the necessary conditions for good…

Video game addiction is a very hot topic. Technological advances, along with the influence of the internet, have give more people…

Sometimes you feel like all of your efforts go unrecognized or that no matter how hard you try, you do…