5 Differences Between Sadness and Depression 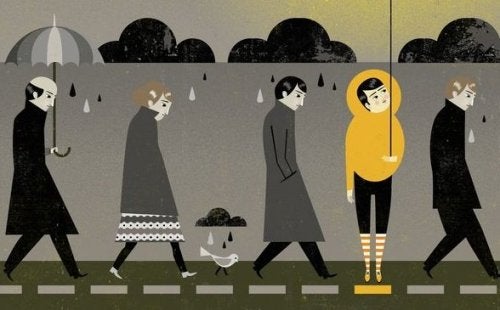 Talking about psychology has become popular recently, but the way we talk about psychology isn’t always correct. We tend to talk about psychology while drawing inappropriate equivalences. One of the classic examples of this is our difficulty to establish the differences between sadness and depression. Therefore, using the word “depression” in popular language has led to confusion about the disease. In fact, it’s even led to some contempt.

Using the word depression instead of sadness or vice versa causes many problems. Some people have found it easier to just say that they’re depressed rather than sad. The first word sounds more technical or scientifically correct, whereas we tend to associate sadness with human frailty.

The duration of psychological phenomena isn’t something we can measure exactly. Despite this, it’s a fact that the duration of the problem can allow a more precise treatment approach. By definition, an emotion has a short duration.

One of the biggest differences between sadness and depression is that the first is a transient, passing emotion. However, depression is relatively chronic unless a psychologist corrects the problem. A person must experience sadness for six months on a continuous basis, according to diagnostic criteria, for a psychologist to begin to suspect depression in a patient.

Abulia is basically a difficulty or resistance to acting. When a person is sad, they feel less motivated to perform their normal daily activities. Maybe abulia reduces your social life or you end up spending less time at work or performing tasks that you usually do. However, you’re still relatively active.

A depressed person, on the other hand, is overcome by this discouragement. They disregard their obligations completely and may start to ignore others’ attempts at helping them. They frequently talk about feeling tired, and that fatigue ends up reducing the number of activities they do throughout their day or week. Hence, depression in clinical terms presents a very similar picture to that of a person with an anxiety disorder.

Another difference between sadness and depression is reflected in the degree of isolation that they’re exhibiting. It’s normal for a sad person to look for close people to talk about how they’re feeling. It’s also normal for them to seek comfort in others, although they can also maintain a degree of social isolation. In this sense, it’ll depend on the person’s personality and coping strategies.

A factor that marks a big difference between sadness and depression is the person’s level of functionality. In the case of someone who’s feeling sad, their mood only slightly modifies their daily habits. The person may become less outspoken and more reserved, but they still basically perform all the activities that they normally would throughout the day.

On the other hand, when a person suffers from depression, their usual routine frequently changes. They have a hard time fulfilling their duties at work and at home. They also have difficulty coping with family, social, and emotional obligations. It’s quite common to see a depressed person repeatedly making excuses to cover up for their lack of commitment or failure to follow through. They simply have a hard time adjusting to a “normal” routine.

A person can be sad for different reasons. However, the reason is almost always associated with a loss or a troubling situation that they’re having trouble coping with. Although the person experiences emotional pain, they’re also capable of laughing and looking forward to the future and making new plans. They may not have the answers, but they feel that there’s a potential for a brighter, more hopeful tomorrow.

In the case of a depressed person, all they have is despair. When they look forward to tomorrow, everything is bleak. They don’t have interest, desire, nor or an ability to think about their future. How can they look to the future if the present is already too much for them to handle?

As we can see, there are important and significant differences between sadness and depression. A mental health professional must treat the latter. Depression isn’t a disorder that will just go away on its own. Therefore, it requires specialized intervention.

I’m Not Going to Let Sadness Strip Me of Who I Am
Should sadness be avoided at all costs? Should we just incessantly look for happiness to keep it away? Or maybe sadness is showing us who we really are? Read more »
Link copied!
Interesting Articles
Wellness
To Consult with Your Kids on Everything is Not Democracy, It's Bad Parenting

Parenting has undergone a bad transformation during the last few decades. The structure of the family has also changed dramatically. It went from…

Emotional ignorance is a great obstacle to relationships. The inability to connect feelings is a huge hindrance in creating a…

One of the greatest thinkers in history, Jean Jacques Rousseau, once said that "children have their own way of seeing,…

Wellness
Kindness is Good for the Brain

Kindness is not easy to define. The word is related to empathy and solidarity, but it isn't limited to those…

Wellness
The 4 Kinds of Mourning We Suffer

We as human beings live our lives by building emotional ties. So, when we lose these, it can cause us to sink…