Inferential statistics is a field concerned with extrapolating data from a population. 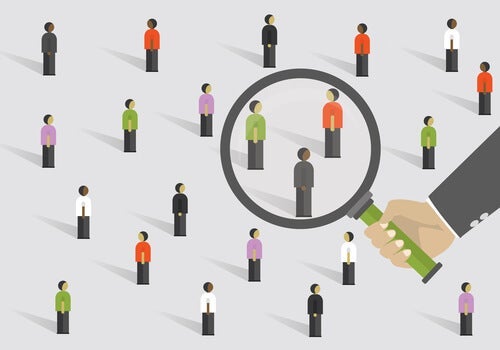 Inferential statistics is a tool for studying a given population. Even if you don’t follow a theoretical model, you’d surely be able to take a sample of one, watch it, and describe it. Thus, this field seeks to answer the question: can you infer the behavior of the whole population using only information from a small part of it?

Thus, inferential statistics in psychology allows you to validate or refute the conjectures of descriptive statistics. That is, both validating a possible model for the population and estimating parameters of that model.

This way, you could say that inferential statistics is the area of statistics that deals with generalizing the results obtained from a sample. To do so, it uses probability distributions as a base and facilitates error, then interprets it as a confidence measure, associated with the results.

“Facts are stubborn things, but statistics are pliable.”

The objective of inferential statistics

Its goal is to generate models and predictions associated with the phenomena, taking into account that the observations are random. On one hand, its use focuses on creating patterns of the data. On the other hand, it extracts inferences about the population under study.

Validity and realism in the observations

This is the most valid and realistic type of statistics for the exchange of information between researchers.

As we mentioned above, inferential statistics acts by means of parameter estimation and hypothesis contrasting.

This consists of looking for the most probable values of a parameter in the population (the mean, for example). There isn’t a lot of information about the population, so one can’t specify a value beyond a confidence interval.

This interval will be accompanied by the probability that the parameter is in it. That is, the confidence level or its complementary (error probability). In addition, one of the values is considered to be the best estimate within this confidence interval. The best possible estimate, that is.

Thus, if you obtain a sample of 50o people from a population of 100,000 inhabitants, you’ll obtain an average body mass that’ll be closer to the average of the population than if your sample contained only 200 people (the law of large numbers). Moreover, it’s likely for the value of the population to be higher or lower than that of the sample. This is because you must consider that the variable is drawn along the continuous “body mass” following a normal distribution.

What’s the value of a parameter?

In order to estimate what the value of a given mean in a population is, you only need to define one number in the descriptive statistics. However, inferential statistics requires three numbers.

These three numbers comprise the confidence interval. This is an interval in which there’s a certain level of confidence that the real value of the population will be included. In terms of a mean, you obtain its upper and lower limits by adding and subtracting the estimation error from the value of the best estimate.

The second part of inferential statistics consists of contrasting hypotheses. That is, you must determine if a statement is true or not in the given population, in probabilistic terms. The most frequent types of contrasts are:

Thus, the need for inferential statistics in the field of psychology seems obvious (you can change the body mass for intelligence, memory, and attention in the examples). When making inferences, you must estimate how the general characteristics of a population will be. Thus, researchers can reach important conclusions about populations. For example, determining measures to take at a social level.

Measures of Dispersion in Statistics
In this article, we're going to tell you about measures of dispersion, one of the basic, most important elements of statistics. Keep reading to learn more! Read more »
Link copied!
Interesting Articles
Research
Avoid Bad Research Practices with Pre-Registration

The difference between identical and fraternal twins brings a lot of confusion to those who aren't familiar with the subject.…

Interesting Articles
Curiosities
Legitimate Defense - How Does Law Protect You?

It's a fact that the human brain never ceases to surprise us. In fact, this article concerns an amazing fact…