Human beings have the need to categorize and measure to know things. Descriptive statistics is a valuable tool for this purpose, as it provides you with very valuable statistics and charts to understand what happened in a given study. 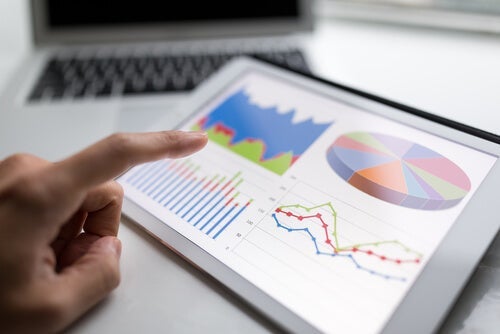 Statistics is the branch of mathematics that studies variability, as well as the process that generates it by following the laws of probability. It’s necessary both to do research and to understand how it’s currently being conducted beyond the conclusions of any study. Thus, knowledge about the branch of descriptive statistics will allow you to know, to a large extent, the quality of a study. Therefore, the degree of reliability its conclusions deserve.

For example, these conditions are usually specified using variables such as age, climate, or degree of anxiety. Thus, descriptive statistics in psychology have the goal of usefully summarizing what happened in a determined study for both the researchers and readers.

You can also classify variables into:

Thus, the data (numbers or measurements collected from the observation) can be of two types:

Measurement is the process of linking abstract concepts with empirical indicators. The result of measuring is a measurement.

There are four possible measurement scales, which you can use to aid you in the classification of variables. In this sense, the reliability and validity properties are very important in descriptive statistics. This is because they tell you about the quality of the measurement. Also, because what’s the use of wrong data collected from the beginning?

On this scale, one assigns numbers to categories that don’t need an order (you can’t say that one category is greater than another). Furthermore, these categories are mutually exclusive. An example of this may be gender or color. Thus, the option you choose excludes some of the rest.

You can assign this scale to qualitative or categorical variables.

Here, you establish categories with two or more levels and they imply an order among themselves. As in the previous scale, these are mutually exclusive categories as well. But now you can put the values ​​of the variables in order. For example, the possible answers to a questionnaire:

You can code these response options with numbers that suggest a preset order, ranging from one to five. However, you can’t know, unless you use advanced statistical procedures and try to estimate the distance between two categories. Thus, you can speak of the fact that the object of the investigation has more or less of something but can’t speak of how much more of that something (intelligence, memory, anxiety, etc.).

You can also assign this scale to qualitative variables.

You can apply the interval scale to continuous variables. However, absolute zero isn’t possible on it. A clear example of this type of measurement is a thermometer. Note that a zero degree reading doesn’t imply an absence of temperature.

You can apply this scale in quantitative variables.

Finally, this scale reflects the characteristics of the previous ones. Determine the exact distance between intervals in a category. In addition, it has an absolute zero point where the characteristic or attribute you’re measuring doesn’t exist. For example, the number of children: zero children means the absence of children.

You can apply this scale in quantitative variables.

A frequency distribution is a list of the possible values ​​(or intervals) that a variable takes, along with the number of observations for each value.

This frequency distribution is usually represented by tables. Thus, it must include all the possible values ​​of a variable. In addition, you must indicate the total number of observations (n). When you have a large amount of data categories and some of them with very low frequencies, then you must group them in intervals.

Finally, indicators in statistics are used to describe a data set using a number. Thus, this number summarizes a characteristic of the distribution of the analyzed data. Some of these indicators are:

With the help of these concepts, descriptive statistics is in charge of debugging, organizing, and calculating statistics and data representations to offer the researcher and the scientific community a complete map of what happened in their study.

Basic Statistics Concepts
Statistics is a branch of mathematics that studies variability as well as other processes. But, what are the basic statistics concepts? Discover them here! Read more »
Link copied!
Interesting Articles
Research
Myths and Facts about Sleep Learning