Infant Vision - What Babies Can See

From what moment after we were born could we perceive the world around us? From what moment on could we see its color? Are babies capable of recognizing facial features? Does experience play a role? Also, are there any practical applications? We'll discuss all of these questions and others about infant vision in today's article! 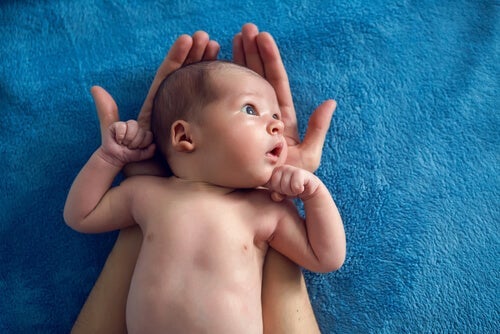 When people talk about the way babies process information, they always dedicate a good part of it to infant vision. This is because the mechanisms for processing visual information develop and adjust during the first months of a person’s life. Read on to discover more about infant vision!

In a study by the Max Planck Society, researchers observed that the majority of verbalizations in reference to the five senses correspond to vision. This is striking since human beings are born with numerous deficits that influence vision in the first months of life.

It should be clear that, in the case of newborns, none of the neural systems involved in human vision are fully developed. This includes areas of the eye organ as important as the retina or the geniculate nucleus.

The fovea, related to color vision, is poorly developed, although it undergoes development during the first months of a baby’s life. This means they have very little contrast sensitivity, which they acquire during that period.

Therefore, at birth, babies can only distinguish red, white, and black. At the age of two months, they can distinguish most of them. By the time they’re four or five months old, they can see all colors.

So, if you offer a baby several toys in red, pastel pink, or green, they’ll most likely prefer the red one. They’ll always select high-contrast toys. If the baby is five months old, they may also select a green toy, since they can tell colors apart.

The tradition of pastel tones and light colors for newborn babies is impractical as to what they can perceive. They won’t be able to see those colors when they’re born. Therefore, opt for red, white, and black toys with contrast and vivid colors.

The straight muscles, the ones that allow the movement of the eyeball, and the ciliary muscle, which hold the lens, are too perfect and rigid when a baby is born. These muscles influence the ability to monitor, as well as the saccadic eye movements. As those muscles are released, vision improves within the first months. This usually occurs between the second and third months of age.

Due to the rigidity of the ciliary muscles, the lens doesn’t fully work. The lens is responsible for accommodation. Therefore, newborn babies have difficulty focusing on what’s near and far for a few months after birth.

In addition, they have double vision due to those little flexible muscles, as they haven’t yet developed their binocular vision. They see two visual fields that don’t overlap.

Visual acuity is the ability to see details or spatial frequency. Regarding vision in the first months, newborns see a 30th part of the details that an adult is able to capture.

This improves from their fourth month of age until a year which is when they reach the level we have as adults. To get babies to see the details, it’s necessary to position an object in a way that’s neither too far nor too close to them. The optimal viewing distance of children is seven feet.

How is it possible for one-month-old babies to recognize their mother or father if their visual acuity isn’t the greatest? We could say it’s thanks to the baby’s range of options. Human beings are multimodal, that is, we’re guided by more than one sensory path. At the optimum distance, the information of the movement, of the smells merges, reaching its recognition through sensory integration.

Babies prefer to look at what they’re able to grasp. Their limitations lead them to prefer one thing over another. When a baby is born, they usually look at the edges, the contour, or the angles of an object. This is because that’s the part of the object that offers the most contrast for them to capture.

Therefore, at first, the baby won’t be able to visualize a face. They won’t even notice what’s inside. They’ll prefer the edge of that surface. Within a month, they’ll begin to look at the eyes, mouth, or chin of a face.

At first, the baby’s preference criterion is that something is visible so it’s determined by the object itself. Their preference will depend on the intrinsic and outstanding properties of a certain object. During the second month, the preference criterion begins to be the experience. A baby will look in the function of the meaning of the object. The cognitive system is developing and can already determine if a stimulus is new and interesting.

Understand objects as separate entities from others

Another function that’s not yet fully developed and that influences infant vision is the ability to separate surface, object, and background. This allows humans to understand the world as it is.

A baby isn’t able to differentiate objects from the surface and the bottom before their fifth month. This means that if they look at a vase and there’s a wall behind it, they’ll believe that both objects are the same thing.

From five months on, they can differentiate objects if these are sufficiently separated. The movement helps them realize this differentiation. If these objects are static, at least before the age of five months, they won’t be able to tell them apart.

Regarding the objects that share a surface, it isn’t until the fourth month of age that a baby will know there are two separate objects. It’s no use if they have different colors. The principle of continuity of the connected surfaces and the principle of common movement are both relevant. The forms tell them nothing on their own.

During the first month, as mentioned above, babies begin to look at people’s faces. There’s a lot of progress beginning in the second month and they become experts. At the age of two months, they have a high visual tracking pattern. Babies look more at faces than at any other stimulus and begin to show preferences for familiar faces.

At the age of six months, they can recognize a face in spite of variations in the expression and even when they see them from the front or in profile. They already categorize according to gender and can differentiate emotional expressions and respond differently to attractive and unattractive faces.

Vision is perhaps the main protagonist of the development of perception in babies. The changes they experience during their first year of life could be considered prodigious. Vision is what will allow infants, among other things, to get to know the world around them little by little.

What’s a Baby’s Smile Telling Us?
One of the most wonderful sights we can experience is a baby's smile. But what are they exactly trying to communicate? Read on and find out. Read more »
Link copied!
Interesting Articles
Educational Psychology
Why is Scaffolding in Education Important?

Many learning centers have abandoned the lecture format. Instead, they want students to leave the classroom with more than just theoretical knowledge. We're talking about places that teach children critical…