I, Daniel Blake: The Ordinary Man

What happens when you find yourself outside the system? How are people of certain ages or from certain sectors of society affected by unemployment? Do governments really protect those most in need? I, Daniel Blake is a commentary on the suppressive reality of the modern person. This film takes the audience down a road it’s nearly impossible to escape from. 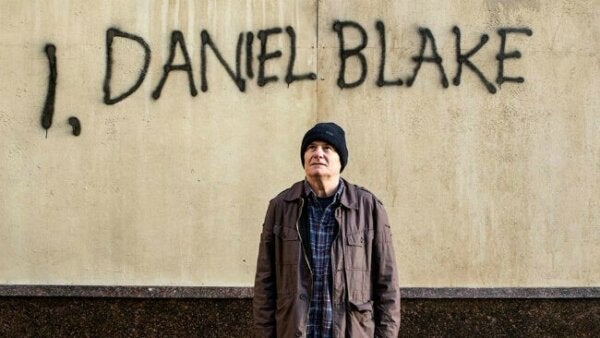 I, Daniel Blake is a 2016 British film by Ken Loach, starring actors Dave Johns and Hayley Squires. Loach’s films are characterized by social drama and by a harsh, ideological realism. His films are inspired by our own society and use audio-visual methods to achieve a clear goal: to denounce inequality, contemporaneity, and the consequences of progress that the media don’t report.

In the early 20th century, stories of war, revolution, and the Great Depression filled the press. Inspired by what they read in newspapers, filmmakers started to make reality the focus of their work. There are many facets to realist cinema, which manifests differently in different countries and is also linked with documentary cinema. In France, for example, Jean Renoir is by far the stand-out director of realist cinema. In Italy, cinema is rooted in neorealism and in post-war Italy, a country devastated by war. It sparked one of the most interesting cinematic movements in the history of the industry.

The goal of realist cinema is to show reality for what it truly is, warts and all, simply depicting society at a specific moment and in a specific place. Following in the steps of other realist writers, Loach uses his films to spark an ideological discussion and reflection on the world that surrounds us. This British director has brought us films including Riff Raff (1990), The Wind That Shakes the Barley (2006), and the film that has caught our attention, I, Daniel Blake.

I, Daniel Blake: the other face of Europe

Europe, the old continent, home to a multitude of countries, identities, and cultures. This is a land of conquistadors, history, and wealth, but also of war and suffering. Many people idealize Europe. It’s a place of eurocentrism, where citizens tend to forget that a world exists outside of their borders and even the realities of people inside them. Europe is synonymous with culture, progress, the old, and the new. It’s a land full of opportunities, or so it may seem…

The United Kingdom is another significant icon of not only the European continent but also the world. It’s a place that radiates with beauty and culture. It’s the home of Shakespeare, the Beatles, and Harry Potter. Could anything bad ever happen there? I, Daniel Blake tells the story of an ordinary man, someone who fades into the background, the guy next door who’s just looking to earn his daily bread. In short, this is a story of a European citizen, a citizen from any corner of the world, who tries to survive by any means.

The real and the ordinary

Daniel and Katie’s situation isn’t the most common, but nor is theirs an isolated case. Loach attempts to show society’s worst side, portraying a modern man, with a job and a house, who finds himself in poverty. This is the reason the film is so transfixing. It shows that this could happen to anyone of us and that, in some way, we’re all Daniel Blake.

Working, paying bills, buying a house, stocking the kitchen cupboards, receiving a pension when the time comes to retire… all of this is part of ordinary life and what we take responsibility for when we work. As citizens, we have certain obligations to the state or nation we live in. In exchange, we get peace of mind and stability.

We need the state and, in turn, the state needs us. This may seem to be a fair exchange. So, what happens when someone loses their job but must still fulfill their civic obligations? How does someone pay their mortgage or rent when they can’t even stock the fridge? This is the suffocating situation that Loach denounces in this film.

A tale of suffering

Daniel Blake is forced to confront the bitter bureaucracy and to fight to free himself from the situation that he’s in. Society pushes him down a road he can’t escape from. His health prevents him from working, but he’s unable to live in a society where you need money to buy absolutely everything.

The film depicts a modern city, suburban estates, soup kitchens, and the marginality that some people must suffer. Rather than portraying clichéd minorities, the film follows an ordinary man, a British man whose luck seems to have run out. Loach succeeds in engaging the spectator in Blake’s suffering and makes them think about their own situation in society.

Daniel Blake is the name of a real, ordinary person. We learn his name from the title before the film even starts. He’s the victim of government policies and the key to Loach’s condemning message. Daniel Blake could be anyone, our father, our grandfather, our uncle, or even us.

At 50 years old, Blake was born in the 20th century, a time when there was no such thing as smartphones or the Internet. The world has progressed at an alarming rate. It has done away with paper and moved almost entirely to screens. Daniel has been left behind, unable to use a computer and without anyone to help him catch up. If he doesn’t complete the necessary forms, he won’t be able to escape from his prison, but the digital divide has no understanding of desperation. The government is the standout villain, whose victims are those who it’s overlooked or hasn’t wanted to help.

The film’s setting is a familiar sight to everyone; modern-day cities are the locus terribilis in which modern-day citizens suffer at the hands of their leaders. It portrays an apathetic civil servant who does their job simply because they have no other choice, as well as a man trapped by unemployment, illness, and poverty. The film won the praise of audiences and critics alike, and it even won the Palme d’Or from at the prestigious Cannes Film Festival.

A victim of the system

It’s almost impossible to be indifferent towards this film’s story. Each and every one of us could be Daniel Blake. Whether we intend it to or not, we’re all part of the same blind and deaf system that wouldn’t hesitate to kick us out the moment we stop contributing to it, regardless of the reason why.

The government isn’t interested in middle-aged people with illnesses or in single mothers. They’re not interested in anyone’s personal lives or emotional ties. The only thing that matters to them is productivity. If you don’t stay in the system, you’ll quickly find yourself lost and it’ll be difficult to get back to where you started. In this heart-breaking reality, Loach portrays real people with their own names and identities. At moments, it can move you to tears.

“I, Daniel Blake, demand my appeal date before I starve.”

Technology, lack of time, and the loss of direct communication are social phenomena that are changing the way we interact…

Culture
Søren Kierkegaard: Biography of the Father of Existentialism

They say that Søren Kierkegaard loved Regina Olsen until his last day. However, his life purpose was to dedicate his whole…

Dialogue is the main foundation of our relationships. It's how we get in touch with our society and our culture.…