Hysteria: Attention-Seeking Or A Cry For Help?

Unhappiness, frustration, and disappointment are just some of the most common causes of hysteria, which can be expressed in a number of different ways. A fit of hysteria takes these feelings of displeasure to a more extreme level, manifesting itself as a loss of emotional or physical control. 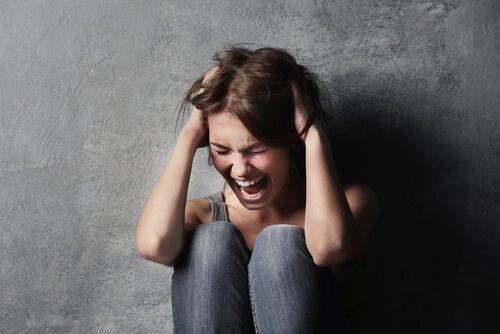 Today, what was formerly known as hysteria is known as conversion disorder or functional neurologic symptom disorder. So-called fits of hysteria are actually a loss of self-control. Although it generally doesn’t have any serious consequences, those who suffer from hysteria often exhibit behavior such as screaming, kicking, crying, pulling their hair out, and may even present seizure-like convulsions or writhing on the ground. These symptoms can be really distressing for those present. But are fits of hysteria simply a form of attention-seeking behavior or are they a sign of something more serious?

Hysterical episodes can be so shocking that, in the past, people often believed they were a sign of demonic possession. Many people who experienced such episodes were subjected to exorcisms. Some were even burnt at the stake.

Throughout history, psychology experts believed that hysteria was a uniquely feminine issue. For a long time, the prevailing theory was it was the result of sexual dissatisfaction in women. In fact, the word hysteria itself comes from the Greek word hysterika, meaning uterus.

In ancient times, Plato once stated: “In women, what’s called the matrix or womb, a living creature within them with a desire for child-bearing, if it be left long unfruitful beyond the due season, is vexed and aggrieved”. He believed that the solution was to “find a husband” as quickly as possible. Today, we know that symptoms typically associated with hysteria or hysterical episodes also occur in men.

In fact, the field of psychoanalysis itself was created from findings observed in patients with “hysteria”. Thanks to the work of those such as Charcot and Freud, as well as contemporary experts, a lot has changed since the early days of psychoanalysis. Cases of so-called hysterical blindness and paralysis are now almost unheard of.

Hysteria is no longer considered a problem sexually unsatisfied women suffered from. What’s clear is that this phenomenon is closely linked to deep psychological distress or unhappiness. Those with symptoms of conversion disorder or hysteria may complain frequently and always seem visibly unhappy. They also have a tendency to compare their reality to some perceived ideal. Needless to say, reality always falls short of their imagination.

Freud believed that hysteria masked hidden pain, which then manifested itself as somatic (physical) symptoms. In other words, the person had experienced some past trauma, which had had a profound impact on their psyche. Unable to face these painful memories, they forced themselves to forget what had happened. This repressed trauma would then return via some bodily manifestation, such as frigidity or paralysis.

Jacques Lacan had a different perspective. According to Lacan, hysterics were attempting to understand what made them women and discover the true essence of femininity. In order to do so, they would first try to identify with a man, imitating their behavior. As a result, Lacan believed that symptoms of hysteria did not develop within the body itself. Instead, the hysteric contracted their symptoms from others.

In addition, Lacan also affirmed that the way symptoms of hysteria passed from one person to another was actually a form of identification. The person identified with another’s desire until it became a collective desire.

Hysteria and “the Other”

Lacan believed that these symptoms were a call to “the Other”. “The Other” was anyone or anything that the hysteric considered to hold some position of power in their life. The Other might be a father, a doctor, a partner, or a millionaire, among others.

The hysteric wanted the Other to validate her, and tell her who she was. In this context, a hysterical episode was, in fact, an extreme expression of the hysteric’s demands to the Other. Thus, the convulsions of someone thought to be “possessed” were in fact a demand to a priest or the church, which assumed the role of the Other in the hysteric’s life. The same goes for a man or a woman who “puts on” these symptoms because they seek more affection from their partner.

The intensity of this hysterical episode would then correspond to the intensity of the symptoms. In some cases, the episode can be so severe that it can even be mistaken for psychosis. Even today, there have still been a number of recorded cases of mass hysteria. Some instances of this phenomenon have occurred at the concerts of popular artists, for example. Cases of apparent mass “possession” also continue to occur in various parts of the world.

What to do during hysterical episodes

The best thing to do when you find yourself in the presence of someone experiencing a hysterical episode is to remain calm. That way, their symptoms won’t “spread” to others, and you can avoid a case of mass hysteria. Needless to say, you should never slap or mistreat the person in any way. If the episode persists for longer than normal, the affected person probably needs professional medical help in order to bring their condition under control.

Sigmund Freud – Theory of the Unconscious
The theory of the unconscious formulated by Sigmund Freud was a milestone in the history of psychology. This opened a strange and fascinating underworld. Read more »
Link copied!
Interesting Articles
Clinical Psychology
Symptoms of Apiphobia, the Fear of Bees