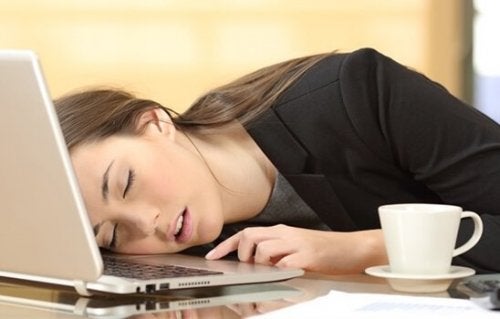 We’ve all overslept and still felt tired. In these cases, maybe you were so sleepy during the day that you couldn’t stay on your feet. If this sounds familiar, you might be suffering from hypersomnia.

Sleep and wakefulness disorders can be divided into 10 different disease groupings. They include insomnia, hypersomnia, narcolepsy, sleep breathing disorders, circadian rhythm disorders, and restless leg syndrome, among others.

This article will explain one of them: hypersomnia. In broad strokes, hypersomnia means sleeping too much. Those who suffer from it never feel well-rested and exhibit excessive drowsiness.

What are the characteristics of hypersomnia?

Those with hypersomnia fall asleep quickly and have high sleep efficiency, over 90%. They might have trouble waking up in the morning, even appearing confused, combative, or ataxic. (Ataxia refers to the lack of coordination between certain parts of the body). This kind of prolonged alteration in the transition from sleep to wakefulness is sometimes called sleep inertia. Sleep inertia is referred to colloquially as “sleep drunkenness“. It can also happen after waking up from a daytime nap.

During this period, the person seems awake. However, they have diminished motor abilities and may behave inappropriately. Memory lapses, spatial disorientation, and dizziness are also common.

This waking-up period can last from a few minutes to hours. The persistent need to sleep might bring with it involuntary behavior that a person has little to no recollection of afterward. For example, there are people who discover they’ve unconsciously driven several miles on “auto-pilot” just minutes ago.

A lot of (bad) sleep

For some hypersomniacs, nighttime sleep can last 9 hours or more. However, that sleep is often not healing, and it’s difficult to wake up even after hours of sleep.

In these cases, excessive drowsiness leads to involuntary daily naps. These daily naps tend to be long (over an hour, even) and don’t result in higher levels of alertness once the person wakes up. Instead, they still feel exhausted.

These naps may happen every day, despite getting many hours of sleep at night as well. On the other hand, the quality of sleep we’re referring to may not be so great. These people still feel drowsy for long periods of time. This is different from a “sleep attack”.

Involuntary sleep episodes happen when the person is not stimulated or active. For example, during conferences, reading, watching TV, or driving for long distances. In the most serious cases, it can even happen during situations that demand a lot of attention – work, meetings, or social gatherings.

What are the criteria for diagnosing hypersomnia?

According to the DSM-5, this is the criteria for diagnosing hypersomnia:

A. The individual experiences excessive drowsiness despite sleeping at least 7 hours, with one or more of the following symptoms:

B. The patient experiences bouts of hypersomnia at least 3 times a week for at least 3 months.

C. Hypersomnia is accompanied by feeling poorly and deterioration in cognitive, social, or other important functions.

F. The coexistence of mental illness and medication can’t adequately explain the recurring presence of hypersomnia.

Although things like non-restful sleep, auto-pilot behavior, difficulty waking up in the morning, and sleep inertia aren’t unusual, these can all be connected to other disorders such as narcolepsy.

Around 80% of those suffering from hypersomnia report that their sleep isn’t refreshing. They have problems waking up in the morning.

Sleep inertia, though less frequent, is a very specific symptom of hypersomnia. Short naps (under 30 minutes) don’t provide any relief from drowsiness.

A small percent of hypersomniacs have family histories of sleep problems. Likewise, they present symptoms like nervous system issues, headaches, peripheral vascular reactivity (as with Raynaud syndrome), and fainting spells.

How common is hypersomnia?

Hypersomnia is diagnosed in about 5-10% of those who go to sleep clinics for daytime sleep problems. About 1% of the population in Europe and the US have sleep inertia episodes. Hypersomnia affects men and women equally.

There are two approaches to treating this disease. On one hand, there are pharmacological treatments. A sleep specialist can prescribe medication to specifically help a patient stay awake longer.

This is better than taking large amounts of psychoactive substances, like coffee. Excessive intake of psychostimulants might lead to serious health – and especially cardiological – problems.

Non-pharmacological treatment basically means modifying sleep patterns. This strategy involves training yourself to control your stimuli and learn to detect when drowsiness strikes. In that moment, you can do a series of exercises to wake yourself up.

There are also certain techniques you can use to make it easier to concentrate. If these don’t work, it might indicate a more serious mindfulness issue.

Lastly, sleep hygiene techniques can be very important. Through sleep hygiene, a patient can establish better sleeping conditions that will help them get better rest. These sleep hygiene guidelines reference environmental factors (room temperature, lighting, etc.) as well as digestive factors (not eating certain snacks while lying down or right before bed). Others refer to different rest-related factors.

That being said, hypersomnia is a medical and psychological condition that must be treated as such. If reading this diagnostic criterion makes you think you have hypersomnia, we advise you to visit your doctor. Remember that only a medical professional can actually diagnose you.

Culture
What is an Information Society?

Nowadays, we live in an information society. This is an ecosystem conditioned by the available technology that allows rapid access…