How Does Exercise Improve your Psychological Life? 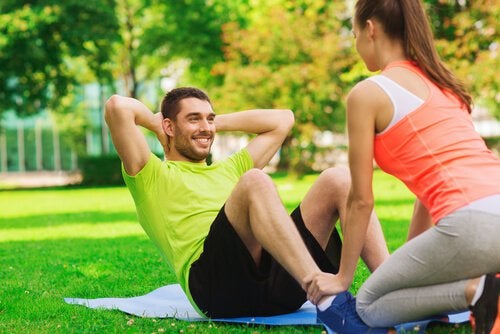 A lot of the guides that try to help improve our lives on both a physical and psychological level recommend a series of  keys. These are strategies and ideas that are easy to explain and argue in favor of. However, they’re not so easy to actually include in your daily life. They require you to change your routines. Specifically the routines you mostly follow out of inertia. The ones you’ve created on your own and have really settled in through repetition.

Of course, it’s a good idea to exercise. But what can it do for you on a mental level? Why is it worth making an open spot in your schedule? What’s the point of getting home and, instead of tidying up, making food, resting, or studying a language, choosing exercise? You don’t feel like it at all. It’s rainy and windy outside. There are too many people at the gym. And it´s too hot there.

Doing exercise maintains the cells in your body

Okay, so your mind seems a bit abstract. It’s the orchestra conductor that a lot of people think of as separate from our bodies. As if it weren’t actually part of the same biological system. People also talk about physical and mental tiredness, as if they were two entirely different things. But, that’s just not true.

When you do exercise something really strange happens: the cells in your body oxygenate. When you exercise it’s like you’re airing your body, just like you do with your house. Of course doing this during the summer is easy. But in the winter it’s a whole other ball game. You don’t exactly have fun when the currents of cold air move through the living room and bedrooms. But how do you feel afterwards? Much better, right?

There are days when your body seems like it loves the feeling of your motor (heart) picking up speed and other days when it’s totally lazy. But how do you feel after exercise? Much better, right?

The cells in your nervous system are thankful when you move your body and get rid of calories by running, jumping, pedaling, or walking. Exercise also has another big advantage in that mind-body unit. It has to do with communication. Ask someone who exercises often and is temporarily injured what they miss the most and they’ll probably say the communication with their body.

If they’ve gone a week or two without being able to exercise, they probably feel like their body won’t talk to them anymore. Or it only talks to them in the language of pain. The information they get from their body has gone way down in quality. So what you achieve when you do exercise is improving the communication with your body. It doesn’t take something hurting for you to realize you have more or less energy. It’s also not easy to explain this to people who haven’t done exercise for years. They don’t remember what it feels like to be in communication with their body, so they don’t miss it.

But enriching that communication is worth the effort…

It improves your social life and gives you time for yourself

Another one of the mental advantages you get from exercise has two aspects. One is the social aspect. Whether it’s individual exercise or a sport, it’s super easy to meet people who are doing similar things as you. Flesh and blood people who aren’t behind a screen. People who can motivate you through sports or with other life goals. People who will definitely widen your circle of social support.

The other aspect of this advantage is: doing exercise means giving you time for yourself. It’s a time to reflect or just avoid your worries. While you exercise you won’t be thinking about how you won’t make it somewhere on time, how the food is going to burn, or how something you do might upset someone or hurt your image. Doing exercise is like an of act of freedom, an update for your mental faculties, and a meet-up with yourself.

It’s unlikely to give you any kind of mental discomfort. While you’re exercising you’ll feel a connection between who you are (or want to be) and what you do. There are no threats, just challenges. The challenge of scoring a basket or running a little faster. Things get simpler, and your mind thanks you for that freedom.

One indirect benefit of exercise is order and discipline. Regular exercising will give you a feeling of consistency and that will make you feel good. It’s like saying to yourself, “Hey, wait, I actually can achieve this goal I set for myself.” These kinds of messages will reinforce your self-esteem and also help you achieve other goals.

You can see it in a lot of people who have given up. You can hear it in their words. They don’t make plans because they have no faith they’ll fulfill them. So they end up living in a kind of anarchy full of negative self-talk. This is because the decisions they make are random and the balances they build are very weak. In those cases, there aren’t many activities as good as exercise for gaining confidence.

How many advantages could there be? We’re still not quite finished. And now it’s worth pointing out one of the most important ones: emotional regulation. Exercise gives you a positive way to spend the extra energy almost all of us have. This happens because we take in more calories than we can actually spend. So if your body doesn’t need so much activity, you’ll have more space to work on your emotions.

Doing exercise reduces your heart rate and tension, so it’ll take something much bigger to get you going than it did before you exercised. This gives you a much wider space to act, intelligently use the information from the emotion you’re feeling, and let it fade away without its energy leading you to do anything you’ll regret later on. And even with kids, exercise improves their self-control and, when it’s well integrated into their schedule, it helps them regulate their sleep.

With all these arguments, it really makes you want to give it a try, right?

Mindfulness in Sports – how Does it Affect Athletes?
It would make sense to think that it applies to mindfulness in sports as well. The more you practice, the more useful it will be. Does it really work like this? Read more »
Link copied!
Interesting Articles
Sports Psychology
The Role of Psychology in Youth Soccer