Humboldt is one of the great characters in modern history. He was determined to discover the world and was the first great explorer to go to Latin America. His travels contributed to a better understanding of the flora, fauna, and climates of the world. 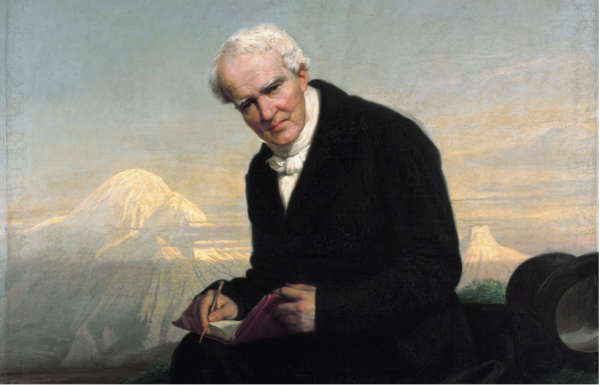 Humboldt is a very important character in modern science. According to researchers from many different areas of knowledge, Humboldt is the ultimate scholar. Indeed, he’s viewed as being on a par with the great scholars of history, such as Leonardo da Vinci. Alexander von Humboldt was a Prussian (present-day Germany) scientist and explorer. He devoted his life mainly to geology and biology.

His scientific findings gave rise to numerous incredible discoveries. He carried out certain atmospheric and magnetic methods of measurement on his travels. These allowed other scientists to discover the Earth’s magnetic field.

Humboldt, as well as being an explorer, was a loyal defender of nature. One of his greatest concerns was the possibility that the human species would destroy natural life due to deforestation. How could a scientist observe this problem almost 200 years ago?

Alexander was always a restless child with a curious mind. He had a real thirst for knowledge and spent much of his childhood exploring the gardens and wildlife of his home. From a young age, he collected plants to study and animals to adopt as pets. Alexander and his brother Wilhelm were educated at home under the supervision of various tutors. His mother was both religious and strict and decided that her children should devote themselves to public life.

The Humboldt boys studied mathematics and literature, as was common at the time. Furthermore, they studied political history and economics. Unfortunately for his mother, Alexander didn’t adapt well to the rigorousness of traditional study. After trying to study at several universities and dropping out of all of them in less than a year, an incredible opportunity came along. He was able to study geology whilst working in a mine supervising workers.

However, Alexander von Humboldt’s future wasn’t going to be limited to a copper mine. In fact, it was to be a world away from there, even though he didn’t know it at the time.

Perhaps one of the achievements Humboldt is best known for is his research in Latin America. He embarked on a journey aimed at “discovering” the continent. On this journey, he made use of maps and astronomical observation as well as magnetic and climactic measurements. Over five fruitful years, Humboldt traveled with his good friend Aimé Bonpland in what was the largest exploratory voyage to South American territory to date.

But how did Humboldt’s great journey begin? In 1799, Alexander von Humboldt convinced King Charles IV of Spain to grant him a permit so that he could travel to his colonies.

The first stop of the journey was meant to be Havana, Cuba. However, an outbreak of typhoid fever made it impossible for them to land on the island. For this reason, they changed course and headed to Venezuela.

Humboldt is one of the most important cartographers of Venezuelan territory so far. Along with Bonpland and his fellow travelers, he explored Venezuela’s caves, swamps, and jungle areas.

After his stay in Venezuela and after a very short stay in Cuba, Humboldt began the long walk along the Andes mountains. This walk took many years and allowed Humboldt to make one of his most important findings. This was that everything in nature is interconnected.

During his trips, Humboldt concluded that nature is constantly interacting. Animals depend on plants and other animals. The climate depends on flora and fauna in the same way that they depend on the climate. In a sense, Humboldt, as well as being an explorer, was the first environmentalist.

Return of the explorer Humboldt to Europe

When he returned to Europe, Humboldt moved to Paris, where he lived for more than twenty years. In Paris, he compiled and published many of the results obtained from his research. He had already collected all the data in Latin America, but the time had come for him to study it in more depth.

Humboldt published numerous articles and books concerning his findings. His descriptions of flora and fauna made him an iconic scientist.

Soon Humboldt was admitted to various academies and select groups of scientists, including biologists, geologists, and botanists. During his stay in Paris, Humboldt dedicated himself to sponsoring young scientists. His main motivation was to sponsor young people with scientific potential but with insufficient financial resources to pursue scientific careers. However, Alexander Humboldt himself wasn’t in the best financial situation, as he had invested the last of his own savings in his projects.

By the time he was 56 years old, Alexander had no money left. He was forced to return to Berlin. And, much to his regret, he began teaching the heirs to the Royal House of Prussia. He spent the last 30 years of his life in Berlin teaching and giving lectures. There, that he wrote much of his encyclopedia called Kosmos, in which he collated all his research.

The legacy of a genius

Alexander was one of the greatest modern scientists and explorers. His research led to significant progress in areas such as geology and physics.

Through his studies, it became possible to discover the Earth’s magnetic field and solar storms. Furthermore, his work led to a greater understanding of geology and volcanoes. In addition, his discoveries deeply inspired authors such as Charles Darwin, the great geneticist and biologist.

However, perhaps one of his most significant contributions to the field of modern science was his deep concern for the environment. At a time when much of nature was still intact, Alexander was able to see the important role nature plays in the life of man. He explained in his works that every natural element is vital for the balanced life of the planet.

The importance of Humboldt’s work today

Humboldt believed in the importance of preserving and safeguarding natural spaces. This is an incredibly important lesson in the modern world. Human life depends on the environment, and modern education has to teach us how to look after it. Currently, all we hear is news about climate change, problems with plastics, and the waste we generate.

For centuries, human beings have been incapable of seeing their own planet properly. They see the Earth as inexhaustible. Therefore, it doesn’t matter if they hurt or treat it badly, as they believe it’ll last forever. Although this myth has been debunked numerous times, people still don’t seem to pay too much attention to it.

However, it’s incredible to see, from a current perspective, that even in those earlier times, there were those who dared to look at the Earth with respect, and as everyone’s home.

Humboldt was ahead of his time, as he discovered how important it is to look after our planet and that it’s equally important to look after the natural spaces and the flora and fauna that inhabit it.

Ecological Intelligence, A Bid to Save Nature
Ecological intelligence may be the answer to the human race's devastating impact on the environment. Learn how to improve your intelligence here. Read more »
Link copied!
Interesting Articles
Biographies
Alejandra Pizarnik, Biography of an Accursed Writer