How the Film Vertigo Explores Psychoanalysis

The film Vertigo is outstanding. The dialogue in it isn't as important as the images -- it's packed with symbolism. Everything is perfectly measured, including the music and the spaces. Continue reading and discover some things about what some consider to be the best film of all time. 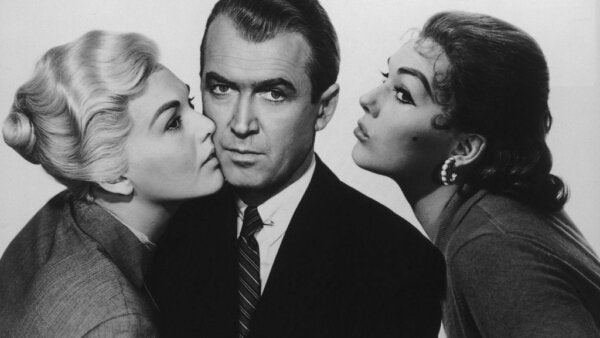 It’s impossible to try to describe everything about the film Vertigo by Alfred Hitchcock in one article. This is because this film requires a deep analysis of everything, from its camera movements to the costumes. Every little detail is meaningful in this movie.

This is precisely what earned Hitchcock the nickname “Master of Suspense”. Indeed, some critics claim the film Vertigo is one of the best of all times.

In fact, Citizen Kane (Orson Welles, 1941) held the position of “Best Film” until relatively recently. However, the classification of Sight & Sound reconsidered it and elevated Vertigo instead.

The truth is that Hitchcock’s film has all the ingredients of a great film and won over both critics and audiences. Its success wasn’t immediate but revisited over time and the film is now sort of timeless.

The film turned 50 in 2018 but it’s as amazing as when it premiered. Vertigo mixes thriller with passionate love, Greek tragedy with psychological problems, colors, shapes, etc.

The film is based on the novel The Living and the Dead by Pierre Boileau and Thomas Narcejac. It definitely captures the viewer’s attention by maintaining the suspense from beginning to end.

The psychological game in Vertigo

Hitchcock loved toying with the human mind and introducing elements that carry a lot of weight in the world of psychoanalysis. His films are purely psychological, vectors that he manages to move in this plane with success to surprise the spectator.

In fact, the director stated that the key to suspense consists in giving information to the spectator — the opposite of what’s usually done.

One formula is to maintain the intrigue throughout the film but it’s hard to do. This is because most people have a short attention span.

Introducing certain privileged information by surprise configures a stimulus for the spectator. It’s a strategy that brings back their attention by instilling curiosity.

The mystery in Vertigo is evident from the beginning. Madeleine’s mysterious character stages it beautifully during the first half. The viewer believes it’s a ghost, a possessed being, perhaps some other kind of paranormal manifestation.

Spectators must try to give a logical explanation to this character. It’s like waking up from a dream from which you barely remember the specific elements. This is one of the mental challenges the film proposes.

This character has an obsessive infatuation with Madeleine. It led him to madness and subsequent tragedy. The film maintains this tension during its first minutes. However, Hitchcock manages to leave some clues that lead the viewer to think the mysterious Madeleine is hiding something. Soon, you meet Judy and this is when the subject of a double comes into play. This is a question often addressed by literature and by psychoanalysis.

Somehow, you know something sinister and dark is going on. Then, the mystery ends as soon as you find out that Judy and Madeleine are the same.

Thus, Hitchcock unveils the “cake” in the middle of the plot and, contrary to what it might seem, the tension increases. What’ll be the outcome? What’ll Scottie do when he discovers what the viewer already knows? Therein lies the power of suspense!

This element is absolutely part of the plot. This is because the viewer has more information than the characters and it could change their outcome. There’s the play with mirrors and appearances framing either Madeleine or Judy’s profile. This increases the tension and you see how Scottie gets deep into a sort of necrophiliac romanticism plagued by voyeurism.

Mysticism is also a part of the scene during the first part of the film. Thus, it increases the feeling of being in front of something paranormal.

The problems of the protagonist manifest from the beginning. There was a traumatic episode in his life that’ll trigger acrophobia and vertigo. Likewise, Scottie has various names and these seem to indicate there’s a certain problem with his identity.

Simultaneously, the sexuality of the protagonist is present in the film. In fact, everything seems to indicate that John can’t be intimate with a woman. There are various phallic symbols but also some yonic ones.

As you can see, the film is nourished by the symbolism of psychoanalysis. It’s configured as a kind of dreaming wrapped in a plot between the romantic and the sinister.

As we mentioned above, everything in the film is perfectly calculated. Furthermore, the visual elements are worthy of a psychoanalytical study. Vertigo and acrophobia are present in the very movements of the camera and even in the scenario: San Francisco.

This city is quite vertical and full of curves which you can follow in the long car journey in the film. This topography sort of instills vertigo.

In the same way, the spiral forms accentuate the sensations of dizziness that afflicts Scottie. There are some hypnotic spirals that welcome the viewer to this sinister adventure in the credits. The spiral is also present on the staircase and Madeleine’s chignon and on the flowers, etc. The camera even makes a 360º turn when the protagonists kiss. They created that effect by placing the actors on a rotating platform.

One of the most emblematic scenes in the film Vertigo

The filmmakers used a compensated traveling or retro-zoom that’s now known as “the vertigo effect” due to its use in this film. This camera move combines a backward and forward zoom that can travel in the opposite direction and recreate the feeling of discomfort and dizziness.

In the film Vertigo, the viewer can see terrifying stairs through the eyes of the character. The spiral brings movement, progression, and it’s also associated with Jung’s interpretation. He related it to a winding path towards the very complexity of human beings.

Dreams and death in the film Vertigo

The paintings that appear in Vertigo are quite revealing. For instance, Gavin Elster, the manipulative villain of the film, is surrounded by them in his first scene. This kind of art implies power and, if you look at them carefully, you’ll realize they feature horses. Thus, one could say they’re a symbol of domination and manipulation.

For instance, the painting of the late Carlota Valdés that Madeleine looks at is a sort of mirror but also a form of objectification. Scottie watches Madeleine as if she were a painting, an object while she looks at it. He’s fallen in love with a ghost, a beloved appearance, an idealization that becomes even more evident when he tries to turn Judy into Madeleine.

This scenario is similar to that in Pygmalion and to Petrarch in his religious love towards Laura. That is to say, Scottie finds himself involved in a situation of unrestrained love. He has an excessive passion for his beloved “dead” woman. Furthermore, he enjoys his servitude towards her and his subsequent penance.

Color also plays a fundamental role. In fact, red and green are present throughout the film and evoke the obscene, the forbidden, the sexual, and the dreamlike. The key moment happens when Judy, dressed and styled like Madeleine, bursts into the room. A kind of fog and greenish tones envelop her and give her a ghostly image. It’s as if Madeleine just arose from a dream.

Toward the end of the movie, there’s a magical moment when the protagonist looks at the medallion and finally remembers and understands the situation. Finally, in another ghostly scene, salvation will accompany death. This is because the end of the problems is personified by Judy’s death.

The whole mystery ends at that moment and Scottie no longer seems acrophobic. The camera remains still when he looks down from the heights. There’s no movement but a static, icy image that indicates the fear has vanished.

Thus, there’s a literal awakening that’s similar to that of a nightmare. John, at last, makes contact with reality and healing occurs. In short, Vertigo is a timeless film, which will continue to leave viewers speechless, captivating them, and enveloping them in an unparalleled dreamlike space.

What Happened to Baby Jane? When Hate Turns into Art
Bette Davis and Joan Crawford were two talented, famous actresses who had a lifelong feud. The movie Baby Jane used this feud and become a true work of art. Read more »
Link copied!
Interesting Articles
Cinema, Television, and Psychology
5 Movies that Will Teach You Something about Yourself