5 Lessons from The Jungle Book 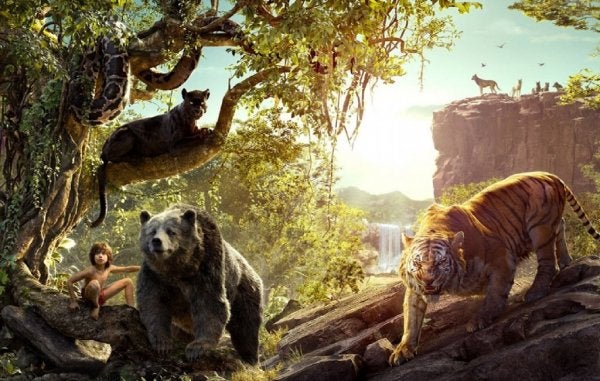 The new version of Disney‘s The Jungle Book has dazzled both children and adults. It’s a well-known story that has spanned generations, and it seems to never fail, even if its songs and characters change. But why do we like this story so much? Why does it excite and inspire people of every age?

The answer lies in its great and timeless message: it’s a story about respecting the environment and everything that lives in it, peppered with adventures, friendships, and fighting spirits, which children love so much.

It’s a fantasy story that has parallels with reality. Mowgli’s story reminds us of real-life counterparts, like the story about the feral child named l’Aveyron, or the passionate story of Marcos Rodríguez Pantoja, the child who grew up with wolves in  Sierra Morena, Córdoba. Such stories have been brought to film.

Going back to The Jungle Book, if you were to see it, there’s something else that would make you enjoy it even more: watching it with children, enjoying how the adventures of the characters, and therefore their teachings, have become classic stories. Let’s take a look at some of them:

1. We’re a small part of the planet

The Jungle Book explains how human beings are just one species among many that occupy the Earth, and how we should respect both the environment and the rest of the species that inhabit it. Every species fulfills its function in the circle of life. Every species is skilled at some things and incapable of others.

As children we believe this, but as we grow up we realize that neither the environment nor the animals are respected. Rather, they’re frequently exploited and mistreated. This is the way it is for people who hide secret ambitions and participate in power struggles in which the environment is sacrificed.

“None of the Jungle People like being disturbed, and all are very ready to fly at an intruder. Then, too, Mowgli was taught the Strangers’ Hunting Call, which must be repeated aloud till it is answered, whenever one of the Jungle-People hunts outside his own grounds. It means, translated, “Give me leave to hunt here because I am hungry.” And the answer is, “Hunt then for food, but not for pleasure.”

Humans can take advantage of their rational side, a key difference between us and other species. Unfortunately, this capacity for reasoning tends to value personal motives above things that would benefit our entire species and those around us. We forget that we don’t own the nature that surrounds us. We’re simply guests.

The Emotional Healing Offered By Dogs

2. Family is more than blood

Little Mowgli arrived in the jungle protected by the panther Bagheera and was adopted by the wolf Raksha, who raised him as another member of the pack. The animals of the jungle knew that he was a human and that this wasn’t necessarily their job. However, they did it anyway.

“No matter where you go, or what they may call you, you will always be my son.”

Mowgli believes this is his mother, the one who licked his wounds, who cared for him, who showed him how to do things, who guided him towards safe paths so that nothing would hurt him. Without belonging to the same bloodline or even species, Raksha is a mother who perfectly exemplifies how everyone needs a happy upbringing, full of love, tenderness, and education. The rest of the variables are secondary.

3. Nature is out there, so enjoy it and be happy

If there’s anything we should appreciate, it’s the beauty and the resources we receive from nature. It’s a luxury of life, health, and happiness that brings us peace and tranquility. It helps us to shape our ideas and capture the most important moments of our lives.

As children, we enjoy this fully, without looking at the clock, and we get excited when we can enjoy longer days with more light.

The movie’s message regarding nature is the same one we receive continuously: “You have to seek it out, follow it, and leave your problems aside.” Enjoy its light and its sounds, because you only live once, and if you do so surrounded by nature, your life will be more complete and happy.

The character Shere Khan is a tiger who, after having a bad experience with humans, specifically Mowgli’s father, thinks that all human beings are his enemies. He warns the rest of the animals that they should hate Mowgli because that “human cub” will grow up and stop being a child, and when he does so he’ll become ruthless like the rest of the humans.

“Akela: Mowgli is a member of our pack!

Shere Khan: Mowgli… they’ve given it a name! When was it we come to adopt man to this jungle?

Shere Khan: [shows his scars] Does my face not remind you of what grown man can do?”

Shere Khan is unable to understand that a few humans harmed him on one occasion, but that doesn’t mean the rest are going to act in the same way. However, his resentment is such that the tiger’s main goal is to kill the human cub, no matter who gets upset about it. Children must understand that resentment is too heavy of a burden to carry.

5. Be a faithful and honest friend until the end

There’s nothing like having friends, and if you can enjoy their company in an environment as authentic as a jungle, or at least somewhere in nature, those bonds will be much stronger. When we were children, we knew that. Mowgli goes around meeting animals of different species in the movie, but Baloo the bear and Bagheera the panther are his faithful friends.

“Bagheera: Did you listen to anything Akela taught you? There’s no place in the jungle for these tricks. You want to do this you do it in the man village.

Mowgli: But I’m helping Baloo get ready for hibernation.

Bagheera: Bears don’t hibernate in a jungle. What are you teaching him?

Baloo: Not full hibernation but I nap a lot.

Mowgli knows that his knowledge as a human can be used both to improve and to destroy an entire ecosystem, and he’s not prepared to destroy the environment in which he and all of his friends live. Everybody can make the decision to do the right thing.

What Animals Teach Us

Link copied!
Interesting Articles
Cinema, Television, and Psychology
A Short Film About How Love Changes Us