How Should I Deal With a Narcissistic Person? 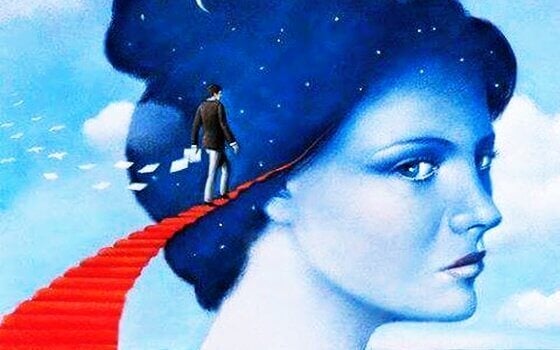 A narcissistic attitude sometimes turns into a real nightmare for the people around them. It’s not easy dealing with the paradox that is narcissism. They inflate their ego to an extreme degree. At the same time they’re as fragile and vulnerable as children. Under that big head is a lot of insecurity and feelings of inferiority.

People with a narcissistic attitude are extremely dependent on other people’s opinions. They only feel good if they get clear signs of admiration and approval. But the second there’s any criticism, they immediately crumble. Their reactions vary widely. They might explode in anger and be aggressive. Or, they might implode and get reserved and dramatically silent.

“Whoever loves becomes humble. Those who love have, so to speak, pawned a part of their narcissism.”
-Sigmund Freud-

This type of attitude tends to go along with a huge ego. For the narcissist, everything starts and ends with the ego. It’s really hard for them to develop true empathy. Though that doesn’t mean they’re completely indifferent. They simply see themselves as most important, and can’t put others ahead of themselves. They feel unique.

The question is: how should I deal with someone like that? We’ll give you some suggestions…

Never forget this concept. If someone has a narcissistic attitude, it’s because they’re trying to give themselves value. But deep down, they’re afraid they don’t really have that value. It’s a compensation mechanism. Just like the peacock spreads its feathers to seem threatening, when it’s actually scared. All that bragging is just how they express an internal conflict they can’t resolve.

That’s why they’re so sensitive to criticism and indifference. You should be very careful when you’re dealing with someone like that. You can easily hurt them, and that will just make their problems worse. They want praise, but you should only give it to them if they deserve it.

Criticism should be expressed delicately, but also sincerely. It’s important to make them feel like it’s not them being questioned, but their actions.

Even if they don’t show it, a narcissistic person suffers a lot. It’s likely they have serious trauma in their past. They’re just trying to live with experiences they haven’t fully digested.

Don’t let them manipulate you

A narcissistic person might also be manipulative. One way or another, they try to make you think how they want you to. So you say what they want to hear. That way, you turn into a reinforcement for the idea they want to believe in.

They might be very good at it, too. They’ll try to make you see how wonderful they think they are. They might manage to convince you they’re pretty intelligent or charming.

Unfortunately, these kinds of people also underestimate the people around them. This helps them keep up their fantasy of being superior. It’s not uncommon for them to look for a way to disqualify you or minimize your achievements. If it’s someone you love, make them understand how all that makes you feel.

What a person with a narcissistic attitude needs is to believe more in themselves. To feel real self-love. If they love themselves, they won’t need to inflate their ego to feel like they matter. On the other hand, if the people around them fall into their game and let themselves be manipulated, their attitude will just get stronger.

How to help a narcissist

What a narcissistic person needs is practice being humble. What can sometimes help are little daily activities, like putting up with a long line or letting someone else go first. It’s also important to help them understand the importance of delegating, and recognizing the good things others do.

These kinds of people need us to help them understand their achievements and good points. With patience and respect, you could help this person love himself more. Or to understand their achievements are real, but that they don’t make them superior to other people. And that they also make mistakes and mess up, but that doesn’t make them inferior to anyone.

The most important thing is to not fall into their trap of  “taking you down a peg.” It will just create bad feelings that will prevent any progress. If a narcissist is lacking anything, it’s real affection and real acceptance. Remember that love can conquer all, especially when a lack of it is making a person sick.