Holy Camp! is a musical capable of combining the old and the new, comedy, and emotions. They do so without falling into clichés. The movie will make you laugh, get excited, and you might actually learn to accept differences and love yourself a little more. Which path to choose? How do you know what your role in the world is? 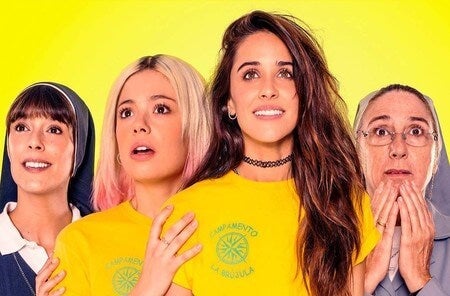 In recent years, especially after the success of Eight Basque Surnames also by the name of Spanish Affair (Martínez-Lázaro, 2014), Spanish cinema seems to have returned to the comedy of entanglements genre. They seek to win over the audience via cliches that are so vomit-inducing that they’re nothing, with the exception of a few rare sparks. Holy Camp! (2017) is an oasis in this desert. It’s a breath of fresh air that cleared up the comedy scene a little. In fact, it demonstrates how it can come to fruition without the need for silly cliches.

The comedy of customs enjoys a privileged place in the Spanish scene. This type of comedy, popularized by authors such as Lope de Vega or Tirso de Molina, has certain similarities with reality, but without going into depth. Normally, their characters belong to the bourgeois class and ridicule themselves according to conventionalisms. In other words, they’re comedies that have a social component but don’t really reflect reality in detail.

This genre owes its inspiration to authors such as Shakespeare and Molière and nobody questions its success. However, his heritage is so strong it dominated Spanish cinema for a long time. The problem isn’t the comedy of customs itself, but the lack of variety, creativity, and novelty.

When you see a contemporary Spanish comedy, it’s almost always about certain topics. For instance, love stories that, for social reasons, usually present problems that lead to ridiculous situations. Cultural, generational, or class clashes are some of the recurring themes and they become exhausting.

It’s difficult to find comedies that go further, that are more spontaneous and don’t produce that feeling of “more of the same”. For this reason, this movie is completely new on the national scene, even if it’s not a new invention. However, Holy Camp! presents a problem, which is the main plot of the film.

Can you talk about religiosity in a comedy without offending? Is it possible to start from a religious discourse and remain completely impartial? The answer to these questions is a resounding yes. Holy Camp! not only manages not to offend anyone but appeals to experimenting, growing, making mistakes, and finding out who you are. All of this is present in Holy Camp!

Youth is undoubtedly one of the keys to the success of Holy Camp! Javier Calvo and Javier Ambrosi, popularly known as “Los Javis”, are the creators of this musical. They’re both young and have recently become known on the scene, at least, as directors.

In a short time, they reaped success and captivated a large part of the public and critics, especially with their unbeatable Paquita Salas. Holy Camp! is their first feature film and inspired by the homonymous play that premiered in Madrid in 2013. A new creation by two inexperienced authors who, in turn, merges well-known and mature faces such as Gracia Olayo with the freshness of actresses such as Macarena García and Anna Castillo.

On a musical level, the new and the old meet again, so there are classics from Whitney Houston along with new songs that comprise a rather original soundtrack. Latin electro is a very recent genre that, despite it being despised by a large part of the population, has penetrated very deeply in the younger generations. Thus, this is something that’s definitely appreciated in the film. For instance, while teenagers Susana and María dream of becoming stars of this genre, the audience finds itself before the total ignorance of Sister Bernarda and Sister Milagros, nuns at the camp. The latter is younger but grew up in a different generation.

The old and the new

The old always seems better than the new, but you may forget that what’s old and classic today was once novel and caused controversy. Holy Camp! brings together the generational contrast that occurs through music: there’s a god character who sings Whitney Houston songs, a nun anchored in religious songs, another younger sister who listens to Presuntos Implicados, and teenagers who prefer Latin electro. And yet everything seems to fit together perfectly.

Holy Camp! may border on the absurd for some and even lead to controversy among certain sectors. But the truth is that it manages to captivate the audience, especially the younger crowd. The film is a breath of fresh air that gives you hope and transmits youth and the will to live. This is because it’s a celebration of life.

At a time when it seems that all musicals come from Broadway, Holy Camp! reminds you that there are no borders or limitations when it comes to art. Thus, you must support young people’s talents.

Holy Camp! Which path to choose?

Holy Camp! takes you to a summer camp called La Brújula, run by nuns. The name is perfect because, in that camp, the chorus cast of the film will find their destiny. They’ll try to avoid losing their way and find the course of their lives in this endeavor.

The young people who come to the camp don’t have much interest in religion or activities, they mainly went to have fun, sneak away, and party like any other young woman their age. María and Susana are two friends with a great fondness for music or, better said, for Electro Latino music. Their musical ignorance becomes evident when they speak of Whitney Houston’s songs as “the songs of the black woman who sings”.

Like any teenager, they have endless dreams that, as irrational as they may seem, make their lives a little more bearable. They want to succeed and make it in the world of music. Also, they’re innocent and easily excited. Both live in the moment, stay in the present, and think only about enjoyment without giving too much thought to anything. One thing they repeat over and over throughout the film is: “Let’s do it and we’ll see”. That motto clearly represents the girls’ attitude towards life. This is because nothing is that important and the fundamental thing is to live in the present. They’ll worry about things when they come so it’s better not to anticipate them.

Of course, the aforementioned attitude contrasts sharply with the uprightness of Sister Milagros and Sister Bernarda. Milagros is young and much more benevolent with the girls, although this means she isn’t taken too seriously and the girls constantly take advantage of her kindness. Bernarda, however, is a devoted woman who fully trusts her religion and its power to “straighten out” the younger ones, even if her methods are unattractive and outdated.

As the film evolves, each of the characters will find each other and discover things they didn’t know about themselves. Also, they’ll trace their path. The religious theme, as the name of the film already anticipates, is connected to the story of Mary and her encounter with God. It’s a heavenly “call” that’ll make her rethink her life, her future, and her purpose in the world. That call will manifest itself in different ways in each of the characters, not only in the form of their god but in the form of love and personal discovery.

Finally, said call will lead to the acceptance of the different realities and singularities of the characters. It’ll bring you to an end in which everything mentioned above comes together. The old and the new, old values ​​and modern values. But in the end, what really prevails are feelings, love, acceptance, and respect. In short, Holy Camp! is an entertaining musical, enjoyable, capable of transmitting what this “call” really means, the characters’ personal discovery… It’s a breath of fresh air and youth in somewhat more complex times.