Discover holacracy, a new organizational system, in this interesting article! 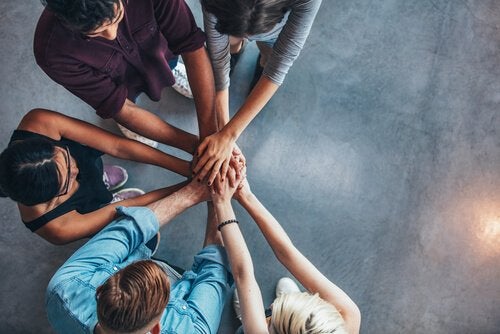 Holacracy is an organizational system characterized by horizontal authority figures and decision-making processes. In other words, it disregards the hierarchical distribution of responsibilities and power.

Although this system may seem strange and anarchic, it’s already been adopted by some organizations in Australia, Germany, the United States, France, New Zealand, and the United Kingdom.

The origins of holacracy

This system was developed at Ternary Software, a computer software company in Exton, Pennsylvania, United States. In 2007, its founder, Brian Robertson, put his ideas regarding a new organization system into practice.

Then, in the year 2010, the Holacracy Constitution came to be. It establishes the principles and practices of this organizational system. Basically, it serves as a guide for all the companies that want to implement this system.

Although Robertson was the first person to actually apply it, the term holacracy comes from the word holarchy, coined by novelist and historian Arthur Koestler. In his book The Ghost in the Machine (1967), he raised the idea of an organization composed of holons.

He explained that holons were autonomous and self-sufficient units that depended on their own collective. From this, we can conclude that a holacracy is nothing but a set of self-regulated units that function independently.

“One of the challenges associated with a company becoming large is that companies become hierarchical. They become bureaucratic. They become slow. They become risk averse.”

The changes that holacracy causes

In short, holacracy is a system that tries to oppose the classical hierarchy most companies follow. In this sense, it seeks to set the “boss” figure aside in order to establish a more egalitarian and efficient organization.

A company’s organization changes drastically after applying holacracy. One of the main changes is the elimination of a structure where each employee is classified in a fixed position. Therefore, companies should make an organization chart that describes the functions of every individual worker.

Basically, holacracy proposes a structure in which each employee can do multiple things inside a company. Thus, they’d be part of different teams at once, and, moreover, their tasks would be constantly updated to adapt to each group’s needs.

When it comes to traditional organization models, there’s little-to-no dynamic within the company’s structure. Those in positions of power that are on top of the hierarchy are usually the ones who give orders in a company. Thus, the other employees must obey and do as they’re told.

However, holacracy is constantly trying to change company structure so that every work team is authoritarian within itself. In other words, each work team should have the power to organize themselves to improve their chances of reaching their goals.

Differences in the company’s philosophy

One of the most important aspects of this system is that all its members, including the CEO or the Executive Director, must follow clearly defined rules. According to this philosophy, there shouldn’t be any authoritarian statements.

Therefore, the fundamental idea is that the company’s policies shouldn’t affect the productivity and motivation of the different work teams. In addition, decision-making shouldn’t fall only on people in positions of authority.

The joint government of holacracy

Companies that apply holacracy distribute work in roles that are updated very frequently. Thus, employees have full autonomy to decide how to do their work, as long as their decision doesn’t jeopardize their colleagues.

On the other hand, holacracy is also characterized by a need for periodic meetings where every employee has the right to intervene, review, and readjust their work.

In addition, these meetings allow every work circle to be in constant interaction with the others. Consequently, this facilitates effective communication between work teams that share members. Said members can exercise the roles of leader, secretary, or representative, according to each team’s needs.

“Good leadership requires you to surround yourself with people of diverse perspectives who can disagree with you without fear of retaliation.”

Empathetic Leadership
How exactly does empathetic leadership differ from other kinds of leadership? Can we learn to lead this way? Read on to find out! Read more »
Link copied!
Interesting Articles
Organisational Psychology
The Dilbert Principle: Why Companies Promote Incompetent Employees

Organisational Psychology
How to Plan Out Alternate Futures

The future is, by definition, uncertain. In other words, you can't know what the future holds. In many cases, it's…