The Healing Power in a Dog's Empathy 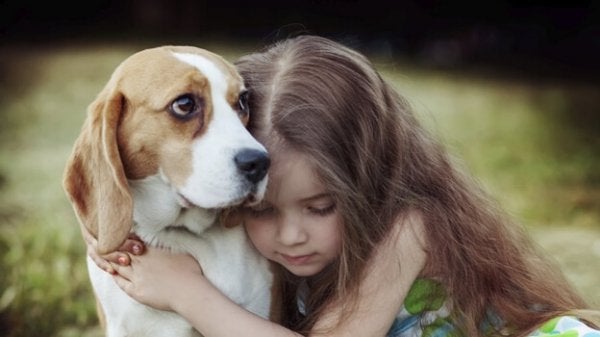 Science has finally been able to demonstrate something that many of us already knew: that dogs are able to feel empathy. Dogs connect with the emotional state of humans almost immediately. However, their ability goes a little beyond this fascinating connection. They also exhibit an altruistic desire to offer comfort and to relieve emotional anxiety and sadness. We are sure that anyone who has one or more dogs will agree with the conclusions reached by a study on the subject of the healing power of dogs at the University of London. We know that these four-legged friends with their damp nose and faithful gaze identify instantly with our joy and, above all, with our sufferings. They don’t think twice about licking your hand, throwing their favorite toy at your feet or to sitting on our lap like affectionate children wanting a smile.

“Do you think dogs won’t be in heaven? I tell you, they will be there long before any of us. “

The healing power in dogs

Empathy in dogs, that wonderful ability to read our moods, actually has even more surprising nuances that are brought out by this study. An example of this can be seen in a very specific case. Benjamin Stepp is a veteran of the Iraq war who lives with a beautiful labrador dog named Arleigh. This young man suffered a traumatic brain injury that, every day, causes him sudden attacks of pain that immobilize his legs.

Arleigh senses when these attacks are going to occur, and immediately goes to her owner for a very specific purpose: to give him support, love, reduce his anxiety and control his breathing so that the pain can go away as soon as possible. The relationship between the two is so fascinating that an ethologist, Natalia Alburquerque, is studying the case. It is known that dogs “smell” certain metabolic changes in our body that can result in, for example, a drop in sugar levels, epileptic attacks and, in this case, the imminent arrival of pain.

However, one of the most amazing aspects of all this is the faithfulness and altruism of these animals. They don’t want anything in return. Their sense of protection and loyalty is so high that the mere fact of conferring relief and well-being is enough to bring them happiness and satisfaction.

Emotional transmission in dogs, a primitive form of empathy

Ethologists and psychologists specialized in the animal world point out a very important aspect: we can’t compare human empathy with empathy in dogs. In the latter case, he prefers to speak of “emotional transmission”, a very primitive form of empathy that, according to Ted Ruffman, a psychologist at the University of Otago, could be compared to that of a three-year-old child.

We also need to take into account that empathy is a complex psychological realm where very sophisticated cognitive processes are at work. When we think about empathy in dogs, what really stands out is their ability to read our facial expressions, our tone of voice and the way our emotional states rub off on them. However, when those emotions are negative, then dogs deliberately change their behavior and immediately begin to offer help, support and comfort.

This last aspect is undoubtedly a topic that has always fascinated the experts. The reason why dogs have such a strong bond with us can traced back to our ancestors, when humankind was at its most primitive. Edward Osborne Wilson is an American entomologist and biologist who explains some really interesting aspects which come out of his studies.

Dogs and humans: an ancient bond

Human beings have had a very close emotional bond with dogs from ancient times, from times when the top priority was to survive. One of Dr. Osborne’s theories is that the humans who lived in social groups which had several dogs, had more chances of staying alive than those who still did not.

Having one or more dogs in their first social settlements meant they were more in contact with nature and its cycles, and also meant that they were able to find more resources to survive: water, animals to hunt, edible plants etc. In fact, we have the evidence of multiple cave paintings where you can see this type of interaction.

Having these animals as companions from those early times gave great satisfaction, and formed a bond in our biological natures.

It is known that looking into the eyes of a dog causes our brain to secrete oxytocin, the hormone that promotes affection, care and affiliation.

This constant interaction that started in those early times strengthened a sophisticated relationship where dogs soon recognized our emotions and where we, in turn, learned to see them as a member of our own social groups. Empathy in dogs is a reality that has always accompanied us.

Our dogs will never tell us to take things easier. They won’t recommend that we change jobs, that we give our partner another chance or that we get rid of a friend who brings us more problems than benefits. They will never suggest anything, nor will they judge you or criticize any of your decisions. Your dog’s only commitment is to “be there”, with you, giving you their best  in exchange for nothing. One of the most wonderful signs of a dog’s empathy.

As strange as it may seem, this is what they’ve always done since they lived with our ancestors, the European hunter-gatherers, who began to tame the most docile wolf pups that roamed around their settlements in search of food. We made them ours and they made us their own in a lasting and wonderful relationship. That’s why most of us can’t help but smile when we set our eyes on a dog.

We recognize each other, our natures interact to produce positive emotional responses. They were our allies in the past and are our therapeutic allies in the present. They bring us peace, they make us smile, they activate endorphins and oxytocin in our bodies, they alleviate loneliness and even reduce our sensation of pain.

To conclude, anyone that doubts the emotional power of dogs and their empathetic ability is undoubtedly severely mistaken. We just need to think of those four-legged anonymous heroes to whom we owe so much: the guide dogs, the dogs that help children with disabilities or dependent elders on a daily basis and, of course, all those wonderful canine friends we love and consider an indisputable part of our family.

7 Things My Dog Has Taught Me
Living with a dog changes your life. Not only is it a huge responsibility, but it also is an inexhaustible source of education and well-being. Read more »
Link copied!
Interesting Articles
Wellness
I Will Give You Wings

If you've ever loved someone, you know that there are times in which you must let go, to give that person wings and let them fly where they want to go.…

I have learned that nothing is permanent in this life. We are all brief passengers in a world that sometimes takes…

Wellness
When Fear Masquerades as Laziness

Wellness
We Get Angry When We Lose Control of Ourselves

Anger isn't always bad. Anger serves a purpose just like all other emotions. However, there is a very fine line that divides…