Have You Heard of the Chameleon Effect? 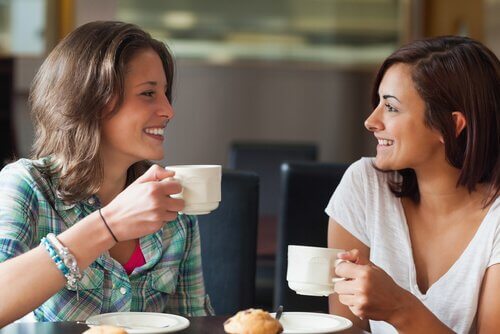 In psychology, there are a great variety of syndromes and effects. Many of them use metaphors in their names. Some examples are the Peter Pan syndrome, the Jerusalem syndrome, the Othello syndrome, the Ben Franklin effect, the Mandela effect, etc. But if we have to highlight one, it would be the chameleon effect.

Yes, chameleons, those little scaly reptiles with big colorful eyes and extendable tongues. If there’s something everyone knows about them, it’s that they can change their skin color. However, the popular conception that they change colors to camouflage themselves is not entirely accurate. Similarly, the chameleon effect is not about how people change colors, but rather how they change.

Only some species of chameleons have the ability to change color. Chameleons are not colorless and their color changes do not always occur according to the environment. Most of the color changes are due to a physiological condition. Chameleons react to temperature and time of day with color changes.

Their color also changes at other times due to psychological factors. For example, when an adversary or mate is near. They also change color when they fight with other chameleons. A chameleon’s color will indicate if they are scared or furious. Therefore, the change of color is somestimes also a form of communication between chameleons.

A very curious character appears in the Woody Allen movie, Zelig. Performed by Woody Allen himself, the main character, Leonard Zelig, appears in different places and interacts with different people. In that aspect he is normal, but Zelig looks different every time. When talking to black people, his skin tone and voice change. When talking to Jews, he grows a beard and ringlets. His weight increases when he talks to fat people.

Dr. Eudora Fletcher, played by Mia Farrow, studies this strange case. The doctor eventually discovers that Zelig has an extreme case of insecurity that leads him to camouflage himself among people, adapting his appearance to be accepted. Zelig has the supernatural ability to change his appearance by adapting to the environment in which he develops, which is why he is known as the chameleon man. After lying about having read a book, Moby Dick, to feel included, the need for acceptance leads him to transform physically and psychologically.

“Everybody in life is a chameleon“.
-Melanie Chisholm-

Obviously, Woody Allen’s film is a parody, a spoof or a caricature. It shows an impossible situation. But we talked about it as a ways to demonstrate what the chameleon effect is. The chameleon effect is also called emotional contagion, and is the tendency to feel and internalize emotions similar to those we observe and, in the same way, influence others’ emotions. It is a process in which a person is influenced and at the same time exerts influence on the emotions and behaviors of other people or groups.

The chameleon effect defines a reality, that in a certain way we all function as if we were a mirror for other people. We imitate others’ emotions or, at least, the emotions that we unconsciously think others manifest. But this effect doesn’t stop there, since we also imitate postures and facial expressions, language, tone, accent. and vocabulary.

Your natural reaction when someone is in a fit of laughter is to laugh. When you’re surrounded by people whose accent is different, it doesn’t usually take long before you take it on. If you’re sitting with someone who crosses their legs, you may end up sitting like that. Although this effect doesn’t always occur, it does happen on many occasions, both consciously and unconsciously.

The function of the chameleon effect

The function of the chameleon effect, from an evolutionary perspective, was intuited by Charles Darwin. In part, the gestures you make determine how you feel. In the same way, the signals that other people give out will also influence you. This makes personal well-being greater and you fit into groups. Without realizing it, small signals from others tell you how to act and your mirror neurons make you imitate them.

Maybe we all have a Zelig inside. When we are with other people, we adapt to have the same emotional state. Emotions are like viruses, they spread around us. We are programmed to infect and spread emotions from the moment we are born. If you have positive emotions, others will also feel them. If, on the other hand, you feel negative emotions, others will also feel them. Although this process is largely unconscious, you can take the first step to show and make others feel positive emotions.

“I am like a chameleon, influenced by whatever’s going on. If Elvis can do it, I can do it. If the Everly Brothers can do it, me and Paul can. Same with Dylan”.
-John Lennon-

Up to what Point Can we Change our Personality?
How many times do we hear someone explain that they cannot change because "that's who they are"? How many times have you felt that you cannot act differently because you have certain inclinations? To what extent can we change our personality? Read more »
Link copied!
Interesting Articles
Personal Development
How to Be More Eloquent

Wellness
The Storms We Go Through Bring Us Back To Life

A large part of who we are is determined by what we have experienced. We tend to under-appreciate the lessons…

In our childhood, we used to live virtually without fears, shame or worries. We trusted in ourselves and in our…