In today's article, we'll talk about anxiety and other psychological conditions that can affect women with gynecological cancer. To avoid the negative repercussions on women's health, treatment is crucial. 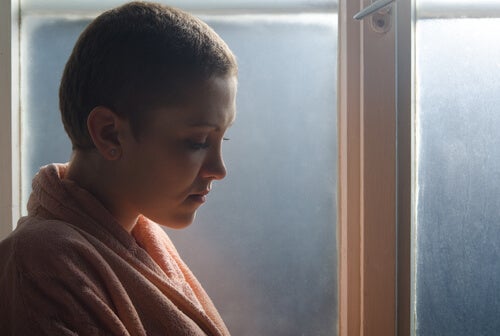 Cancer, in any of its forms, is a stressful life event that affects every aspect of a patient’s life. Many factors have an influence on the unique experience of each cancer patient: the support of their family and social circle, age, available resources, etc. Scientific literature also suggests that gender can play a role in the patient experience.

The differences in the cancer experience for men and women

The sensibility towards particular types of cancer is different between men and women. This may be relevant when it comes to understanding why a gender-based perspective is important.

Borras (2015) states that gynecologic tumors (when breast cancer is included in this category) make up 40% of all tumors in women. For men, only 22% percent of their tumors are due to prostate cancer, followed by lung cancer and colorectal cancer.

Also, there are differences in survival rates between male and female cancer patients. In Spain, the most common type of cancer in women, breast cancer, has an 83.8% five-year survival rate. And while prostate cancer has an 84.7% survival rate, the rate for lung cancer drops to just 10%. Lung cancer accounts for 50% of total tumors found in men. Consequently, it seems that women with cancer die less often than men with cancer, though it’s important to note that the conditions aren’t the same.

The demands of breast cancer

The fact that breast cancer is one of the main causes of death in women makes it relevant regarding cancer treatment. People’s conditions vary, so the demands of their cancer change as well.

In the case of breast cancer, which is the most common cancer in women, gender (which is a social and cultural category) seems to play an important role.

According to Canicali, Goncalvez, Pire, Costa, and Costa (2012), breast cancer involves lifestyle changes caused by physical discomfort and alterations in the patient’s self-image.

These authors observed that women with breast cancer also have low self-esteem and a significant reduction in libido.

These authors reference other studies that suggest that there’s a clinically significant prevalence of anxiety and depression in breast cancer patients. They talk about symptoms such as tension, unspecified fear, and general worries.

Concerns of patients in the pre-surgery stage

Olivares (2004) studies the psychological aspects of gynecologic cancer. One of them, anxiety, turns out to be a recovery predictor for post-surgery patients.

Anxiety in breast cancer patients is relevant because, according to this researcher, patients with higher levels of pre-op anxiety had higher levels of post-op pain and discomfort. They also needed more medication and required longer hospital stays.

What are women with cancer worried about?

To better understand breast cancer anxiety, it’s important to study the specific concerns of a woman with breast cancer.

While it’s easy to see that, in general, this illness is a source of stress and fear, a 2018 study conducted by Mota, Aldana, Bohorquez, Martinez, and Peralta identifies the specific factors that generate anxiety in female cancer patients. Some of the main factors are:

The kind of anxiety a patient will experience is different depending on their age and the type of cancer they have. For example, women who have undergone a mastectomy often report frustration, sadness, and anxiety and depression disorders.

For breast cancer patients, the type of anxiety they experience often gets in the way of their family and social lives.

Body image and sexuality after cancer

Many cancer patients experience anxiety on top of the illness they already have. In addition, women with gynecologic cancers experience physiological changes that play an important role in their post-cancer well-being.

According to Garcia-Viniegras and Gonzalez (2007), self-confidence, emotional stability, strength, positive emotions, and self-esteem condition a person’s self-esteem over the course of their life. After cancer, many women struggle with some of these factors.

Sebastian, Manos, Bueno, and Mateos (2007) argue that, while cancer usually involves surgery and often results in physical changes, the psychosocial connotations of those physical changes can be particularly significant for women.

That’s because, in our society, breasts are important for femininity. Many women feel, for example, that losing one of their breasts means that they’re losing what it means to be feminine.

Not only that but breasts seem to play a crucial role in a woman’s ability to attract and keep sexual partners. Undergoing surgery or treatment for breast cancer usually affects that in some way.

Are breast cancer patients the only ones with sexuality issues?

Every medical treatment involves different circumstances for the patient. We’ve seen that fear, sadness, anxiety, and low self-esteem are common factors for patients with gynecologic cancers.

It’s also important to point out that these psychological changes can actually have an impact on how the disease develops. With that in mind, it’d seem all the more crucial to make sure that female cancer patients get the proper mental health care as well.

Treatment shouldn’t just include chemotherapy. Women need resources for dealing with the anxiety they feel before any medical intervention; mental health education programs to break down conventional myths, such as the belief that a woman’s breasts and vagina define her sexuality and femininity; and make self-confidence and self-esteem building part of the treatment goals.

The ultimate goal shouldn’t just be the patient’s physical health but her general well-being.

Psycho-Oncology to Improve Cancer Patients’ Lives
Psycho-oncology helps patients and their families improve their quality of life and better manage all the emotions that come with a cancer diagnosis. Read more »
Link copied!
Interesting Articles
Wellness
I'm Not Tired of Love, I'm Tired of Disappointments

Psychology
Our lives are filled with more fantasy than reality

When we talk about fantasies, many believe we are talking about a topic that is far removed from everyday reality.…

In life, we meet all kinds of people. Some of them encourage us to move forward with their kindness and…

Wellness
The Body Language of Fear

Although feeling scared is normal and perfectly valid, there are situations in which making it obvious isn't in our best interest. Unfortunately (or fortunately, depending on how you see it), the…

Wellness
Don't Let It Get Away Because of Fear!

“If you don’t realize what it’s worth, life is trivial, if you keep letting escape what you most wanted…” Well,…

Wellness
Everything Must Have A Farewell Ritual

We've suffered losses throughout our lives. Again and again we are forced to say goodbye to people, places and situations…