What's Gilbert's syndrome? What are the symptoms? Could it be a protective category for other diseases? Today's article will tell you all about it. 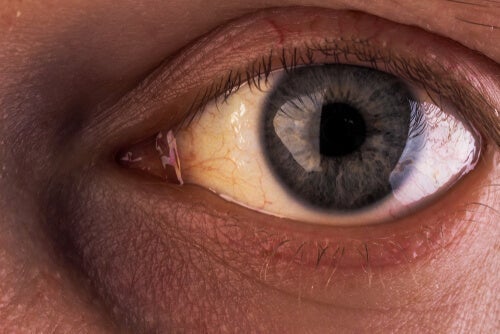 Gastroenterologist Agustín Nicolás Gilbert first described Gilbert’s syndrome in 1901. He observed that certain patients had elevated levels of indirect bilirubin and, therefore, a yellowish tone in the skin and sclera of the eye. This is commonly referred to as jaundice.

These patients didn’t have any viral alterations, such as hepatitis, nor did they have obstructions of the bile ducts due to tumors. What happened is that, due to a genetic mutation, people with Gilbert’s syndrome had an absent liver enzyme known as glucuronosyltransferase.

This enzyme wasn’t present. Thus, it was impossible for them to properly metabolize bilirubin, a yellow pigment found in the bile and formed by the degradation of hemoglobin, just as it happens in the rest of the population. Therefore, their levels increased as a consequence.

“Hatred is one of the poisons; like jaundice, it alters the true colors of things.”

Gilbert’s syndrome is common but unknown

This syndrome doesn’t have serious implications for a person’s life. Thus, it’s good to know it manifests as a series of extremely uncomfortable symptoms, even though it’s usually minimized. There’s also a significant association with emotional problems such as anxiety, depression, and obsessions.

Similarly, although not much is known, estimates indicate it affects five percent of the population and is more common in men than in women. Some people with this condition don’t know they have it until a routine blood test reveals it. Doctors usually diagnose it between the ages of 15 and 30.

In addition to these symptoms, today’s article will describe it in more detail. As a side note, bilirubin protects against other pathologies.

Studies reveal that bilirubin levels that are a bit higher than normal derive from an antioxidant that can prevent relevant pathologies, such as cancer. They also found that patients with Gilbert’s syndrome have more protection against cardiac problems. In addition, their blood pressure is lower.

The symptoms of Gilbert’s syndrome

It’s common to hear in doctor’s offices that Gilbert’s syndrome is asymptomatic. Actually, a significant percentage of patients feel misunderstood because this statement doesn’t correspond to their daily reality.

While it’s true that not everyone with this condition has these symptoms, many do and are frustrated that no treatment can improve their quality of life.

The symptoms usually appear in outbreaks when bilirubin levels increase. It tends to do so when the liver works harder due to fasting and physical activity, for example. Also, if you have a tendency to stress or catching a debilitating virus.

The above symptoms are among the most typical in patients with Gilbert’s syndrome. However, there are others such as hand tremors, memory loss, clumsiness, lack of coordination, and recurrent mouth sores.

Based on recent epidemiological studies, it seems that Gilbert’s syndrome isn’t just an “aesthetic” condition as far as jaundice is concerned. There’s enough documentation to affirm an inverse correlation between cardiovascular and oncological risk — especially colorectal cancer and total bilirubin levels in the blood.

These findings replicated in various ethnic groups. The reason is that bilirubin exerts a protective antioxidant and anti-inflammatory effect. Thus, bilirubin is better able to reduce lipid oxidation than glutathione and vitamin E. There’s a connection between higher levels of total bilirubin a lower risk of nonalcoholic steatohepatitis, diabetic nephropathy, and coronary stent restenosis.

Would it be outrageous to propose an induction of artificial bilirubin to prevent these diseases? Is Gilbert’s Syndrome, paradoxically, a therapeutic disease?

Like other diseases, such as irritable bowel syndrome or fibromyalgia, even Gilbert’s syndrome is “orphaned” in terms of consideration and research. The conclusion one can reach after reading this article is that, perhaps, such research could open many doors.

On the one hand, there’s a need to design some type of treatment that would relieve the adverse symptoms of this condition as much as possible. On the other, researchers must also analyze in greater depth the properties of bilirubin in the blood and verify its possible benefits in life-threatening diseases.

The Relationship Between Your Skin and Your Emotions
When you are sad or stressed, your skin appears rougher and less lustrous. When you feel good, your skin seems to be in perfect harmony. There is a link between your skin and your emotions. Read more »
Link copied!
Interesting Articles
Illnesses
Can Viruses Control Our Behavior?