You only need a bowl with something appetizing and a mobile to observe the ability of self-control in children. Have you heard of the fruit snack challenge? 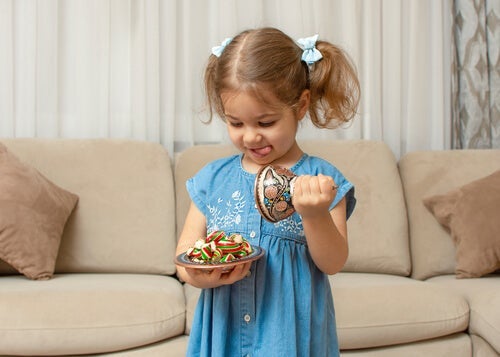 The fruit snack challenge has flooded social networks in recent weeks. Many people on the Internet have also called it the challenge of patience since, in reality, it deals with a fundamental developmental capacity: self-control in children.

The challenge is to fill a bowl with attractive food for children, generally sweets such as fruit snacks. The parent/guardian places it within the child’s sight and reach. However, the child is told that they can’t eat them until the adult returns. Meanwhile, a camera records the child alone while the adult leaves for a few minutes.

Children’s reactions are pretty varied, some predictable and others surprising. There are children who show great self-control and even resort to distracting techniques such as singing or instructing themselves not to touch the snacks. Others bite only a small piece and leave it quickly, feeling regretful. On the other hand, other children are overcome by temptation and can’t resist taking them before the indicated time.

This challenge has a precedent in the 70s known as the marshmallow test. A researcher called Mischel, along with his collaborators, conducted this experiment at Stanford University. Their goal was to get answers about delayed gratification and self-control in children.

The marshmallow test is similar to the fruit snack challenge. However, this experiment proposed something different. If the child was able to resist the temptation, they’d get twice as many sweets as they were initially provided. This way, they discovered that the children who passed the experiment used distraction techniques and self-instruction.

However, the biggest discoveries came later. Interestingly, they evaluated those same children at adolescent ages, which led them to other significant findings.

Those who passed the experiment had greater social skills and higher self-esteem. In contrast, those who failed to make it to the end of the experiment had higher levels of impulsivity, aggressiveness, and a greater likelihood of developing behavioral disorders.

Self-control in children is the opposite of infantile impulsivity. Basically, it supposes an ability to regulate one’s own emotions and impulses. Self-control is actually quite a complex skill, especially in children. It requires training and is especially difficult to handle up to four or five years of age.

This ability influences all important areas of a child. For this reason, it’s related to the development of difficulties in later stages. For example, in the social sphere, self-control in children is especially important when it comes to respecting the turn to speak, controlling tantrums, sharing, and respecting the properties of each child, among other things. In the same way, low self-control leads to poor emotional regulation and the child can be overwhelmed in everyday situations.

Some childhood disorders can seriously compromise self-control. For example, attention-deficit/hyperactivity disorder or ADHD. One of the main characteristics of this disorder is impulsiveness. This, of course, compromises the daily life of the individual and even their physical health by having frequent accidents and falls.

How to assess self-control in children

The fruit snack challenge has entertained social media users by witnessing the internal struggle that some children have to show self-control. However, some signs of daily life allow us to assess this ability. Let’s see what they are.

Self-control is an ideal, a model people should follow no matter their age. Not all children develop this ability in the same way and at the same time. As a consequence, not everyone acquires these skills. It’s important to keep in mind that learning is a thorough process.

As you can see, the fruit snack challenge can be fun. It helps to learn how children handle situations that require self-control. Through it, the adult is able to observe the way the child develops this skill.

A good way to instill self-control in children is precisely by having good self-control yourself. Remember that, when it comes to parenting, you serve as a mirror. Your child will always aim to act the way you do. Be a good example!

Three Ways to Increase Self-Control According to Science
If we want to increase our self-control, we must take responsibility for our actions and decisions. Read on to learn more! Read more »
Link copied!
Interesting Articles
Clinical Psychology
Psychological Pregnancies: A Hysteric Phenomenon

Psychology
Giving Up vs. Knowing When to Quit

There are stories, relationships, and connections that have given all they have to give. They are like a rope that…

Margaret Floy Washburn was a brilliant student who was ahead of her time. Her character and tenacity gained her the…

Psychology
Bruxism: Why Do People Grind Their Teeth?

Has anyone ever told you that you grind your teeth during the night? Have you ever felt pain in your…

Interesting Articles
Brain
Characteristics and Function of the Raphe Nuclei