The acceptance of a loss is never easy. It can be so difficult, in fact, that some people just can't manage the suffering. Some of them set it aside, refusing to accept the new absence in their lives. Delayed grief can last decades and can become a reality where pain becomes silent and chronic. 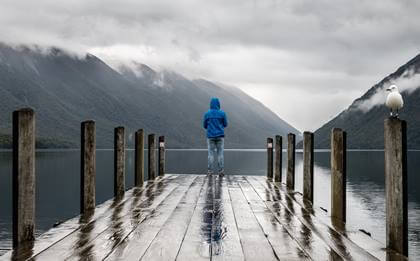 Frozen or delayed grief is when a person hasn’t overcome a loss. It’s mourning that becomes chronic, that you drag along with you permanently. This suffering manifests itself in various ways. It can manifest as anxiety, stress, fatigue, apathy, or constant irritability, among others. As surprising as it may seem, this is a very common clinical reality.

Many people don’t know what to do with this group of painful feelings. This type of suffering can paralyze and put a person into a place of emptiness where it’s difficult to manage their life. Other people redouble their focus on their day-to-day routines. They might bury themselves in work or other obligations, trying to convince themselves that they can keep moving forward. They tell themselves that nothing is going on. That they can hide their pain like someone who stores a personal object in a safe.

Both cases result in a type of suffering with the same general anatomy. This is pathological grief, which lacks closure and acceptance of the loss. If there’s something you need to understand, however, is that pain has no expiration date. It can last decades and even seep into every thought you have and thing you do. Delayed grief can hide behind a variety of illnesses. Eventually, it can even nullify your chances of ever being happy again.

“To weep is to make less the depth of grief.”

Pain can become frozen or even stay trapped like a seed in a drop of amber. This is what happens when you fail to confront a painful reality. It can happen when you tell yourself that it’s better to set it aside and go on living your life. This will help you stop thinking of the person you’ve lost.

If there’s something that specialists in mourning know well, it’s that each of us experiences it, psychologically, in very different ways. That being said, the general vision that people tend to have on the topic is that a loss is equal to sadness. Furthermore, many experts say that, on average, it takes between a year and a year and a half to be able to overcome and close off a period of mourning.

These ideas aren’t completely correct, though. For starters, when you lose someone, you feel something more than just sadness. There’s anger, confusion, and even anguish. So the experience of grief is directly related to the personality of each person who suffers it. The resources an individual might have as well as the social and personal support they can gather also come into play.

A study that Dr. Katherine Shear of Columbia University in New York conducted claims that it’s very difficult to predict how a specific person is going to deal with the loss of a loved one. In addition, it’s estimated that approximately 5% of the population will at some point suffer from frozen or delayed grief. Below, we present the characteristics of this process.

Symptoms of frozen or delayed grief

Frozen or delayed grief is a sort of defense mechanism. The affected person refuses to accept the reality of what’s happened. They can’t face it and they feel incapable of dealing with such massive suffering. That’s how the brain comes to choose to simply deny or “freeze” the suffering, setting it aside for another time.

Although it may seem like agood solution, all of that psychological strain and emotional containment can lead to the following consequences:

How can you treat frozen or delayed grief?

Those who live with frozen grief should know that, sooner or later, the emotional burden they hold inside will end up coming out. Sometimes, one sudden trigger is enough for countless negative emotions to arise. These can push you over the edge. That’s how the death of a pet, witnessing someone’s illness, or even just a tiny setback can unleash a whole avalanche of emotions you might not know how to handle.

In the Diagnostic and Statistical Manual of Mental Disorders, Fifth Edition (DSM-5), there’s no entry for “delayed grief”. Nevertheless, it does include diagnostic criteria for “persistent complex bereavement disorder”. As experts are now aware of the existence of pathological grief, they’ve been developing new therapies in recent years to deal with it. Some of them have proven to be very effective.

One example of such therapies is the one Dr. Julie Wetherell from the University of California, San Diego presented in a 2012 study. This study looks at a therapy that combines cognitive behavioral therapy, interpersonal psychotherapy, and prolonged exposure techniques. The basic goal of this therapy is to help the patient accept the loss and work on their emotions. It places special focus on one emotion that tends to come up in many cases in particular: feelings of guilt.

In conclusion, facing a loss is something none of us are prepared for. Mourning is neither a universal nor a normative process. Instead, it’s dynamic, brutal, complicated, and can even result in psychological conditions. Having the will to ask for help (and let others help you) will allow you to deal with this reality in a healthier and more successful way.

Grief and Mourning in Children: How to Understand and Help Them
When there is a death in our family or amongst friends the children suffer too. Read on to discover how grief in children is expressed in different ways and at different ages. Read more »
Link copied!
Interesting Articles
Family
Slave Grandparent Syndrome

Family
The Outcome for Children of Demanding Parents

Parents want the best for the children. However, the problem lies when they become demanding parents. They don't understand that…

Family
Why Do Parents Abandon Their Children?

Several interesting facts about motherhood speak of just how dedicated a woman needs to be to embrace motherhood. Also, of…