Francisco de Goya was an 18th century court painter to the Spanish crown. He's most famous for his portraits and a series of darker works called The Black Paintings. 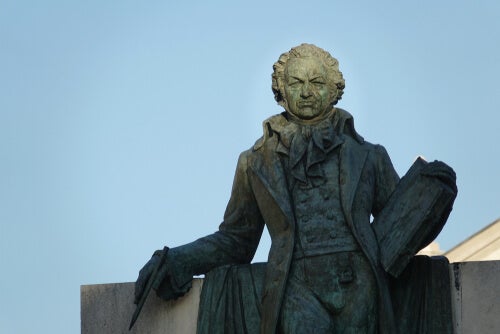 Francisco de Goya was a Spanish painter famous for his portraits. He was a favorite of the Spanish nobility, which led to a huge number of commissions.

His portraits were personal and realistic. He didn’t embellish his subjects but always maintained a naturalist style.

Art historians consider Goya the best Spanish painter from the end of the 18th and beginning of the 19th century. Consequently, his portraits, paintings, prints, and murals were the beginning of the age of contemporary painting.

While he was still young, his family moved to Zaragoza. Just a few years later, when he was 14, Goya started working as an apprentice to the painter José Luzan. There, he learned how to paint by imitating the great masters for the first four years. This was a common teaching method at the time.

Later, Goya moved to Madrid to study with German painter Anton Raphael Mengs. In spite of his training, his art was still rather rudimentary.

Goya tried to get into the San Fernando Royal Academy of Fine Arts in 1763 and 1766 but was rejected both times. In 1771, he moved to Rome where he became the finalist in a painting competition. He returned to Zaragoza to work on several projects, but only stayed for a short time.

A few years later, Goya studied with Francisco Bayeu y Subias and finally gained some recognition as a painter.

In 1774, Goya’s friendship with Francisco Bayeu gave him a way to get into the royal studios, which were in the care of Master Mengs at that time. This year was a decisive one in the life of the painter because his paintings became more solid and original.

In the royal studios, his job was to paint tapestry cartoons for the Royal Tapestry Factory. This job turned into a real blessing for Francisco de Goya’s artistic development.

Over the next five years, he completed over 60 cartoons. His scenes were representations of day-to-day life. Some of his cartoons were used to decorate the royal Spanish residences in San Lorenzo del Escorial and in El Pardo.

Francisco de Goya rose very quickly in the Spanish courts. In 1779, he was named royal court painter and chosen as a member of the Royal Academy of the Arts in 1780.

In March of 1785, Goya was named sub-director of painting at the San Fernando Academy. Finally, in 1786, he earned the title of Painter to the King, although he was still very young.

Members of the royal community began to recognize Goya as a talented portrait painter. In no time at all, he painted portraits of the Count of Floridablanca, the Crown Prince Don Luis, and the Duke and Duchess of Osuna. Goya earned his reputation as a portrait painter.

Goya painted a series of masterpieces that reflect his style and distinctive talent. Among his most well-known work are The Black Paintings, The Nude Maja, and The Clothed Maja.

Experts consider The Majas to be Goya’s masterpieces due to the story about the paintings as much as the paintings themselves. It’s important to note that The Nude Maja was the first painting in history to show a woman’s pubic hair. This was completely scandalous at the time.

In 1815, this portrait got Goya into trouble during the Inquisition. He managed to avoid any problems thanks to the intercession of powerful people in his circle.

“Fantasy abandoned by reason produces impossible monsters: united with her (reason), she (fantasy) is the mother of the arts and the origin of their marvels.”

Historians believe that his paintings titled The Disasters of War from 1810 are a representation of the May 2nd uprising. The uprising happened in 1808 and led to the Peninsular War of 1808-1814.

In 1814, the battles inspired him to paint The Third of May 1808 and The Second of May 1808 (also known as The Charge of the Mamelukes). These paintings show the horror of the Peninsular War between Spain and France and the subsequent loss of human life.

His paintings had a significant influence on the 20th-century artists who followed him. He has a special influence on Pablo Picasso, Paul Cezanne, Edgar Degas, Francis Bacon, and Édouard Manet.

In June 1773, Goya married Josefa Bayeu y Subias, his art professor’s sister. Only one of their children, their son Xavier, survived to adulthood. Later, he married Leocadia Weiss, with whom he had a daughter named Maria del Rosario Weiss.

In 1793, when he was 47, Goya came down with an illness that would affect his personal and professional life. No one knows for sure what he contracted, but it developed quickly. It took nearly two years for Goya to recover, but the illness left him completely deaf.

Many historians believe that this illness marked the beginning of his black period. Of course, his illness also coincides with his most imaginative work.

In 1819, he moved to the suburbs of Madrid where he bought a house along the Manzanares river that he called Quinta del Sordo (Deaf Man’s Villa). He didn’t stay there long, however. In 1824, he moved to Bordeaux and then to Paris.

He returned to Spain in 1826 but returned to Bordeaux shortly after. In April of 1828, while he was still in France, he suffered a stroke and died at the age of 82.

Goya was buried in Bordeaux in the San Isidro Cemetery. His remains were exhumed and re-buried in the Royal Chapel of St. Anthony of La Florida in Madrid in 1919.

Art and Psychology
The Psychology of Art: Concepts and Characteristics