Read all about Malala Yousafzai, the human rights advocate, in this article! 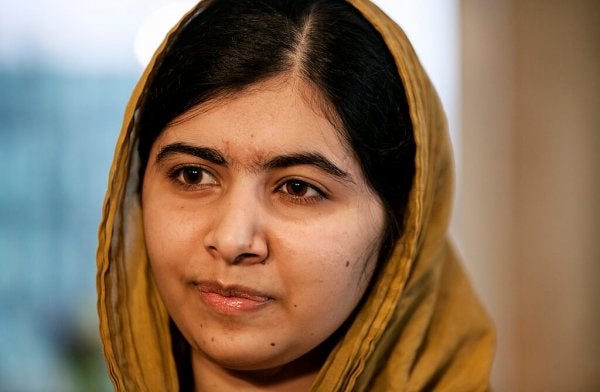 Malala Yousafzai won the Nobel Peace Prize in 2014 at the age of 17. In fact, she’s the youngest Nobel Prize laureate. This young activist and human rights advocate fights for the education of young girls around the world.

Malala was born in Mingora, Pakistan, in 1997. She’s the oldest of three siblings. Her father believed that she had the right to an education, which is why he enrolled her in a school. He was the one to encourage Malala to get on the path of political activism, although she wanted to become a doctor.

How did Malala start to fight for human rights?

In 2007, the Taliban took over the Swat district and banned all girls from going to school. At that moment, Malala started writing a blog about her life under the new regime, which she sent to the BBC under the pseudonym Gul Makai. On this online platform, she denounced this violent group’s discrimination against girls and women.

Although many children, young people, and adults have been attacked and murdered by the Taliban, Afghan women are still the main victims of injustice, disrespect, and inequality.

“They began to spread the message that women didn’t have the same rights as men. That was unacceptable to me, which is why I raised my voice. I wanted to become a doctor and make my own money and my own decisions. I remember that I started to cry when I heard that message,” said Malala during an interview on the topic.

On October 9th, 2012, Malala was a victim of an attack in Mingora, Pakistan. When she was riding a bus home from school, two Taliban gunman shot her in the neck. Once the Taliban leader found out that she had survived the attack, he threatened that he’d try to kill her again.

Malala’s life was in danger because she was denouncing all the heinous acts that the terrorist group had committed in the Swat district north of Pakistan. She often said that it hurt her that female education was prohibited in most schools.

After surviving the attack, young Malala was sent to a hospital near the capital of Pakistan, Islamabad. Doctors extracted the bullet from her neck. Afterward, she was sent to the United Kingdom, where she underwent multiple surgeries.

People around the world supported Malala after the attack, which led many international political leaders to start denouncing what was happening in Pakistan.

After getting a cochlear implant and a skull reconstruction surgery, doctors considered she was stable enough to start living her life out of the hospital. After being released from the hospital, she continued to fight for human rights.

Her strong personality made her unstoppable. People now see her as a heroine and as the voice of girls who fight for their educational rights.

“The terrorists thought they would change my aims and stop my ambitions, but nothing changed in my life except this: weakness, fear, and hopelessness died. Strength, power, and courage were born.”

We are all Malala

Malala is a wise, sensitive, and centered young woman who has experienced the best and the worst human beings have to offer.

“We must believe in the power and strength of our words. Our words can change the world.”

This young woman has the entire world’s love and support. She has also received numerous well-deserved awards in many different countries.

Malala is simply an amazing young woman, an inspiration to those who fight to promote sustainable change in the world.

“That’s why the terrorists are afraid of education. They do not want women to get education because then they would become more powerful.”

Feminists of the Arab World
People don't know much about Arab feminists. In this article, we briefly cover the lives and contributions of four of them. Read more »
Link copied!
Interesting Articles
Culture
Affection Ambivalence: When Love and Hate Coexist

What do we seek in the world? Health, peace, money, love? The wisdom of the Tibetan monks provides a possible answer: we seek happiness within ourselves in order to experience it with others.…

We all need to read phrases of encouragement every once in a while. No matter how strong you are, certain…