Francis Galton, a Biography of a Renaissance Man

Francis Galton was a vocational scientist. He had one of the most creative minds of the 19th century. Continue reading to find out more! 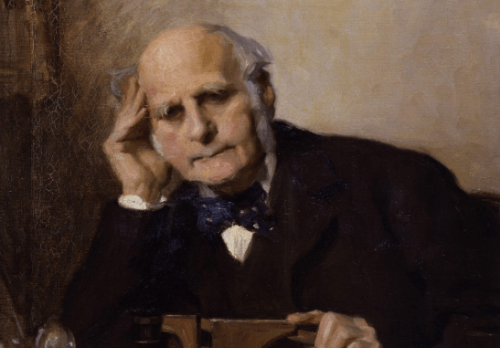 Francis Galton was a British anthropologist, geographer, inventor, meteorologist, statistician, psychologist, and eugenicist. He was a cousin of Charles Darwin and grandson of Erasmus Darwin. Indeed, he was one of the most creative minds of the 19th century.

Galton was born in the British privileged class. He was a vocational scientist who doesn’t fit in a specific discipline and the creator of the English biometric school. His contributions to fields as diverse as meteorology or psychology, among others, were extraordinary.

He spent much of his life traveling, like many other scholars of the time. Eventually, he devoted himself entirely to scientific research. After spending time on meteorology, he developed a growing interest in anthropology, inspired by the work On the Origin of Species by his cousin Darwin. As a result, he became a defender and ideologist of eugenics, the discipline that advocates the application of biological laws to perfect the human species.

His contributions to individual differences are very important in the field of psychology. In fact, many consider Galton a precursor to knowledge about the genetic basis of cognitive ability. He was the first to scientifically investigate the genetic and environmental causes of individual differences in humans. This is a study reflected in his book Hereditary Genius: An Inquiry Into Its Laws and Consequences, published in 1892.

The early years of Francis Galton

Francis Galton was born in Duddeston, England in 1822. He was a child prodigy, only five years old and quite advanced in mathematics, Greek, and Latin. Also, he was already reading books for adults at the age of six.

He attended school until he was sixteen. This is because he dropped out due to the tedious curriculum. His family pressured him as a child to study medicine, a science he pursued at King’s College London. In addition, he studied math at both Trinity College and the University of Cambridge. Years later, Dalton alluded to the connection between genius and madness. He did so based on his own experience.

In 1844, he began to travel and started in what’s now ancient Constantinople. In fact, he crossed eastern Europe and reached Egypt, Sudan, Beirut, Damascus, and the Jordan Valley. Later, he undertook a long expedition to Namibia and then Spain. He published two books as a result of these journeys: Narrative of an Explorer in Tropical South Africa in 1853 and The Art of Travel in 1855.

Francis Galton married in 1853 and his marriage lasted 43 years; there were no children. Then, from 1860, he devoted himself entirely to scientific research. His fondness for mathematics led him to attain knowledge from different fields.

In meteorology, he created the first weather maps published by The Times and coined the term “anticyclone”. Also, his investigations into the human mind required a detailed recording of subjective concepts and how the mind deals with mental images. Thus, he used the survey and questionnaire methods to be able to put it into practice. He was a pioneer in the use of the latter. Furthermore, his contributions to statistics are numerous.

In the field of anthropology, his theory of inheritance and demographic statistics stand out. He wrote books such as Hereditary Genius in 1869 and Natural Inheritance in 1889 on these subjects. His theories on inheritance were of great importance during his time. Basically, until Mendel and Weismann surpassed them. In addition, his works on fingerprints and eugenics in the field of anthropology also stand out.

Francis Galton’s studies of human capabilities led to the creation of differential psychology and the formulation of the first mental tests through the development of psychometry.

He had a keen interest in measuring all possible facets of human beings that seemed endless. Among them, measures of intellectual dexterity and intelligence capacity.

Galton was the first author to refer to the dilemma between inheritance and environment, a debate that has continued throughout the years. It’s now considered a matter of degree among influential elements.

In 1883, he invented the term eugenics to refer to artificial selection for the betterment of the human race. Also, in his book Inquiries into Human Faculty and Its Development, 1883, one can see how he concluded he believed in the possibility of determining a scheme of “marks” for family merits. In addition, it also considered that among families of high social class or rank, early marriage should be encouraged through monetary incentives. In fact, he considered dysgenic those that took place at an older age. Especially between privileged people with a shortage of children.

These and other theories served as the foundation for ideas of race superiority such as those proclaimed by German Nazism. In this way, the practice of eugenics resulted in racial cleansing, sterilization of people with disabilities, the mentally ill, and poor citizens.

England, the United States and some Latin American countries also implemented eugenics programs. However, these ended up falling into disrepute due to their association with the Nazi regime.