The Five Levels of Maslow's Hierarchy of Needs 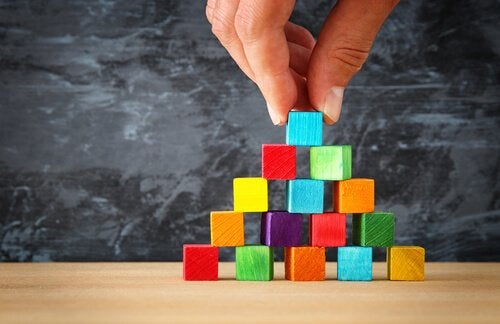 What motivates human behavior? According to humanistic psychologist Abraham Maslow, meeting certain needs is what motivates our actions. To explain motivation, Maslow introduced his hierarchy of needs in 1943. This hierarchy suggests that people are motivated to satisfy basic needs before passing on to more advanced ones.

While some current schools of thought such as psychoanalysis or behaviorism focus more on maladaptive behavior, Maslow was much more interested in discovering and understanding the motivation behind people’s actions and why some individuals felt happier with their choices than others.

As a humanist, Maslow believed that every single person had an inborn desire of self-realization: becoming everything they wanted to be. However, in order to apply tools to achieve this goal, they had to meet their most basic needs beforehand such as food, security, and love.

Maslow established that people feel motivated to meet certain needs in a hierarchic way. Our most basic need is physical survival, which is the first one to motivate our behavior. Once this level is met, the following will be prioritized over the next, and so on.

In the next section, we’ll be talking about the five different levels of Maslow’s hierarchy of needs. The first level is the pyramid’s base and the rest pile up on top of it.

The five levels of Maslow’s hierarchy of needs

Once all the physiological and security needs are met, we turn to the third level of human needs. This level is related to our social aspect and involves the feeling of belonging. The need to establish interpersonal relationships greatly motivates our behavior.

Maslow pointed out that the need for respect or reputation was more important for young people and that it preceded real self-esteem and dignity.

Maslow once said: “What a man can be, he must be”. With this, he referred to the need individuals have to develop their potential in order to achieve their goals.

Self-realized people are conscious of themselves, worry about personal growth, aren’t fazed by other people’s opinions, and just want to take advantage of their potential.

Maslow’s hierarchy of needs is divided into deficiency needs and growth needs. The first four levels are called deficiency needs or d-needs, while the top level is known as a growth need. Deficiency needs arise due to privation. Some say that they motivate people when they’re not met. In addition, the motivation to meet those needs increases the more time they spend unmet.

Initially, Maslow said that people must meet the lower-level deficiency needs before progressing to meet higher-level growth needs. However, he later clarified that the satisfaction of a need is not an “all or nothing” phenomenon.

When a deficiency need is “more or less” satisfied, it disappears and we proceed to orient our behavior toward the next set of needs that we must meet. These then become our main needs. In this sense, we always have needs to meet.

On the other hand, growth needs don’t come from shortage but from the desire to evolve as a person. Once we’ve reasonably satisfied these growth needs, we’re able to reach the highest level, called self-realization.

Every person is capable and wishes to reach the self-realization level of the hierarchy. Unfortunately, it’s often difficult for us to reach it because meeting the lower-level needs demands most of our resources. On the other hand, different experiences can make an individual fluctuate between the levels of the hierarchy.

Therefore, the hierarchy won’t always work in a unidirectional way. The person may move back and forth between different types of needs. In fact, Maslow pointed out that the order in which these needs are met doesn’t always follow a standard progression. For example, he stated that some people care more about their self-esteem than their need for love. For other individuals, the need for creative realization can replace even the most basic needs.

Limitations of Maslow’s hierarchy of needs

The most significant limitation of this theory is its methodology. Maslow reviewed 18 people’s biographies and writings that he considered self-realized. From these sources, he compiled a list of qualities that this specific group of people had in common.

From a scientific perspective, there are various issues with this methodology. First off, some argue about Maslow’s subjectivity in regards to his biographical analysis since it’s practically based on his judgment. Personal opinion is always prone to prejudice, which makes data less valid. Therefore, Maslow’s operational definition of self-realization shouldn’t be blindly accepted as a scientific fact.

Additionally, Maslow’s biographical analysis focused on a biased sample of self-realized individuals, limited to well-educated white men such as Thomas Jefferson, Abraham Lincoln, Albert Einstein, and Aldous Huxley, etc. Although Maslow studied self-realized women, such as Eleanor Roosevelt and Mother Teresa, they constituted a small percentage of his sample. All of this makes generalizing this theory a lot more difficult. Furthermore, Maslow’s definition of self-realization is extremely difficult to prove empirically.

Maslow’s hierarchy of needs was also criticized because it assumes that an individual must satisfy their lower-level needs before they can reach their full potential and self-fulfillment, which isn’t always the case.

There have been various studies in poor areas of the world that have shown that people are in fact able to satisfy higher-level needs (such as belonging and love) without having all their basic needs met. However, Maslow completely disagrees with this since he stated that those who have difficulty meeting very basic physiological needs (such as food, shelter, etc.) aren’t able to meet the higher-level needs.

However, many creative people such as Rembrandt and Van Gogh lived in poverty throughout their lives and perhaps they simply devoted a good part of their resources to covering higher needs.

Psychologists now define motivation as a more complex agent: different needs could motivate a person at the same time. Thus, a person may find their greatest motivation at different levels at once.

Despite how criticized it was, Maslow’s hierarchy of needs is the starting point for many studies that seek to understand why we behave as we do or why the same stimuli can produce very different reactions in different people.

Abraham Maslow: The Father of Human Psychology
Abraham Maslow is one of the most important names in psychology. In this article, we'll discuss his life and importance. Read on! Read more »
Link copied!
Interesting Articles
Psychology
High Sensitivity: Defenseless in a World of Pins

High sensitivity is considered a gift, a special and very intense way of seeing and understanding our surroundings on the…

Psychology
I'm the Love of My Life

I'm the love of my life. And saying it out loud isn't an act of egocentrism or arrogance. It's a reflection we should all internalize every day, just like someone…

Lucio is the protagonist of the experiment that lends its name to the syndrome. His behavior in the study was the…

Psychology
Friendship for Women Is Different

Friendship for women women is not the same is friendship between men. Female friendships are highly important to women. We…