In Charles Bukowski's quotes, you'll be able to see a poet who was hurt by the lack of meaning, authentic values, and honesty of contemporary society. He used his words to reject and complain about the world in which we live in. 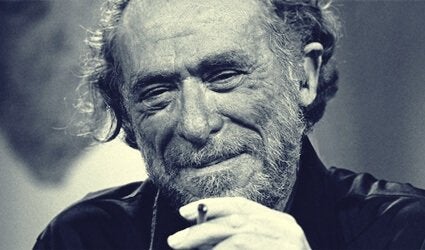 Some of Charles Bukowski’s quotes are controversial. This German writer, who also became an American citizen, was quite critical. He loved exposing the contradictions of modern society, as well as its hypocrisy and lack of meaning.

Bukowski is considered one of the greatest representatives of dirty realism. This movement aims to reflect the most decadent things about society. It arose as a response to the disenchantment and lack of meaning that characterized life after the horrors of World War II.

His quotes conjugate complaint with lyricism. He talked about human selfishness, social cruelty, and political hypocrisy. He didn’t believe in ideals or utopias. On the contrary, he openly claimed he was a pessimist and didn’t have faith in the future. Even so, his work is incredibly moving. These are some of his best quotes.

“Sometimes I looked at my hands and realized that I could have been a great pianist or something. But what have my hands done? Scratched my balls, written checks, tied shoes, pushed toilet levers, etc. I have wasted my hands. And my mind.”

1. The intellectual and the artist

“An intellectual says a simple thing in a hard way. An artist says a hard thing in a simple way.”

Some of Charles Bukowski’s quotes are funny. In this one, for instance, he plays with words to convey a graceful message with sarcasm.

It’s obvious that, by comparing the intellectual with the artist, he also confronts reason and sensitivity. He states that an artist has more wisdom.

2. A Charles Bukowski quote about society

“We have formed our society with our lack of spirit; it’s as if we deserved it.”

This is another Bukowski quote that perfectly reflects his thoughts. A critic of North American society, he never ceased to point out its faults. He also talked a lot about its great contradictions.

In this quote, he exposed the paradox that is the fact that society wasn’t formed by the action of its members, but instead by their lack of action. And he includes himself among those who do things by default.

“The problem with the world is that the intelligent people are full of doubts, while the stupid ones are full of confidence.”

This quote became very popular. Through it, Bukowski emphasized the fact that genuine intelligence prevents certainty. Whoever looks beyond the apparent, has doubts about what’s real and the extent of reality and its implications.

Instead, those who don’t think, don’t look, or don’t want to look, easily adhere to small absolute truths. They’re certain about many things, so they don’t question them or put them to the test. That’s what makes them “stupid” and full of confidence at the same time.

4. Dying in order to really live

“You have to die a few times before you can really live.”

This quote reflects Charles Bukowski’s poetic and sensitive side. This is one of his few hopeful quotes. Although this quote sounds pessimistic, it ends in an optimistic way.

This quote speaks about life as something that challenges linearity. You’re born and you die a few times. In order to really live, we have to complete the cycle several times. It means we have to end everything in order to be born again. This is the only way to truly live.

“What matters most is how well you walk through the fire.”

In this quote, Charles Bukowski let his didactic side and hidden kindness come into the light. The fire, in this case, refers to what harms, destroys, or attacks our integrity.

Thus, walking through the fire means having the ability to keep moving forward amid destructive forces that torment human beings. That, according to him, is the most important thing: going through those ablaze paths without burning yourself.

Charles Bukowski left us with controversial and bold quotes that perfectly represent a rotten society.

The Best Robin Sharma Quotes for a Better Life
These Robin Sharma quotes speak of leadership, consciousness, personal growth, and success. They're gifts we can learn a lot from! Read more »
Link copied!
Interesting Articles
Culture
6 Tips to Improve Communication Between Parents and Children

There is no parenting manual that will work for every single parent in the world. But there are certain general…