Fear of Pain or Algophobia

Read this article to see if you suffer from algophobia. 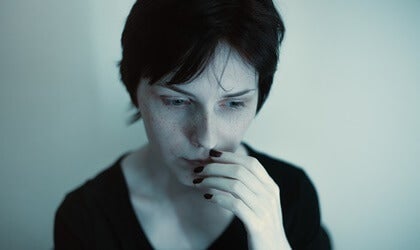 Fear of pain or algophobia is extreme and irrational fear that involves high anxiety and anticipation. Actually, it occurs mostly among the elderly population and has more than one intervention strategy.

Fear of pain is as common as it is normal. After all, who isn’t afraid of physical suffering? Being in pain is one of the least desirable states a person can be in. In fact, our natural tendency is usually to do everything we can to avoid it.

The flight from pain is a reflex mechanism due to our personal integrity and survival and, therefore, serves an adaptive purpose. However, there are people for whom this fear reaches clearly higher levels than what experts consider normal. Then this fear has a diagnosis of algophobia.

In addition, it’s not only the intensity of the fear that stands out in them but also its frequency, persistence, and influence on daily life. Because of this, for people suffering from algophobia, this anxious aversion to pain constitutes a real problem with marked socio-affective implications.

From a psychopathological standpoint, fear of pain can be defined as a type of anxiety disorder. For example, it’s when a person may experience an irrational and extreme fear of a particular person, object, or situation.

This concept has an enormously broad applicability, since there are many pathologized fears that can occur in some people.

In the present case, the feared situation would correspond to the time of suffering pain and the feared object of the pain itself with all the negative characteristics. This includes both psychological and strictly physical-perceptual, that it usually brings with it.

A curious fact about algophobia is that, in population terms, it has a higher incidence and prevalence among the elderly. This fact isn’t without reason since older people, in comparison to younger people, are more exposed to:

Therefore, it’s typical for a person with a fear of pain to anticipate the occurrence of conditions that may cause pain. Moreover, this anticipation is often accompanied by some cognitive and physiological anxiety. Then, this leads the person to suffer the results of pain in an anticipated and fictitious manner.

The phenomenon of hyperalgesia is an exacerbated sensitivity to pain. Generally, it originates from physical damage to nerves or nerve endings and pain receptors. In addition, in more than one study, it’s related to the psychological phenomenon of algophobia. However, these altered states aren’t necessarily found together.

A person suffering from hyperalgesia may develop a fear of pain. This is due to previous experiences of the potential pain that various stimuli may cause. Conversely, an individual with high levels of algophobia may be more psychologically predisposed to experiencing physical pain. Moreover, at the moment of actually perceiving it, the pain may be subjectively disproportionate.

Assessment and treatment for algophobia

In a clinical setting, there’s more than one diagnostic tool to determine the presence of this phobia and to quantify its intensity. On the one hand, the assessment of hyperalgesia would essentially correspond to the medical field. On the other hand, that of algophobia is more of a psychological one, as it often corresponds to acquired habits and learned behaviors.

One of the most widely used psychometric tests is the Fear of Pain Questionnaire (FPQ-III), which, depending on the value it shows for a subject, can lead to the appropriate differential diagnosis.

The psychotherapeutic approach for fear of pain isn’t excessively different from that applied to other types of phobias. In general, it’s most effective when it includes a combination of two types of treatment:

Pain is an element to avoid and from which most people tend to flee. If it’s an avoidable pain, logic would seem to dictate that there’s no real reason to suffer from it. In this case, then it would be acceptable to employ strategies for the avoidance and/or relieving of this pain.

And the same could be applicable for that other secondary pain that the anticipation of one’s own primary pain causes suffering from algophobia. In these cases, it could also become helpful to rely on medical and mental health professionals to prevent this fear of pain from negatively affecting well-being.

In 1895, Von Monakov described the case of a patient who suffered partial blindness following an injury. What stands out about this…

Culture
Every Gesture is a World

Every day, we voluntarily make a variety of gestures. We perform them in order to relay information that others can understand. The frequency with which this happens may lead us…

We must take into account incentives in education. An education system that helps students face tasks and overcome their challenges is necessary for quality learning. Thus, to provide quality education, we must…

The concept of validity has evolved over the years. Previously, experts believed that a test was valid for anything it…